MOONMACHINE by Stepan Sarpaneva – Forged by a Giant Impact 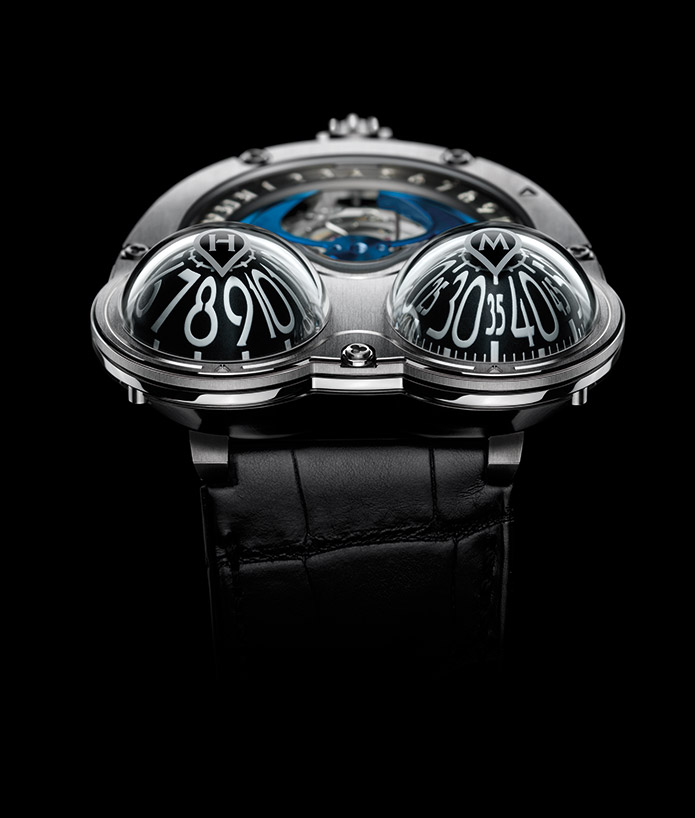 MOONMACHINE by Finnish watchmaker Stepan Sarpaneva is both the first of the MB&F Performance Art pieces by a watchmaker and the first to endow a Machine with a new complication. With MOONMACHINE, Stepan has taken a specially configured HM3 Frog and transformed it with his iconic moon-face moon-phase indicator set in a scintillating firmament of northern stars.

The MOON: Around 4.5 billion years ago when the young Earth was still forming, Theia, a proto-planet the size of Mars, is thought to have struck our planet and disintegrated in a ‘Giant Impact’. Some of the debris was attracted by the Earth’s gravity and the rest – consisting of material from both Earth and Theia – went into orbit around the Earth. Within 12 months this orbiting debris coalesced to form the Moon.

Over the next 4.4 billion years, the Earth’s tilt in relation to the sun was stabilised by the gravitational pull of the Moon, which provided regular relatively mild seasons over much of the planet’s surface – ideal conditions for life to form and evolve.

Without that cataclysmic event, we would not be here. You might say we are all Children of the Moon.

And no sooner did modern man start walking the earth than he stared up at the night sky in wonder and awe at the biggest and brightest orb in the heavens. Perhaps none more so than the inhabitants of Finland – including Stepan Sarpaneva – because the less romantic and less well-known counterpoise to the summertime Land of the Midnight Sun are extremely long nights in winter, which gives the population more time than most to study the moon and stars.

MOONMACHINE: While considerably less cataclysmic than the formation of our Moon, MOONMACHINE was also forged from the creative collision of two worlds: MB&F’s HM3 Frog and independent watchmaker Stepan Sarpaneva.

Before launching his own brand Sarpaneva Watches in 2003, Stepan Sarpaneva worked with some of the most prestigious Swiss brands including Piaget, Parmigiani – where he worked alongside Kari Voutilainen – Vianney Halter and Christophe Claret.

“Stepan has an incredible sense of design and a real sense of detail. His work and everything he surrounds himself with is extremely coherent.” Maximilian Büsser 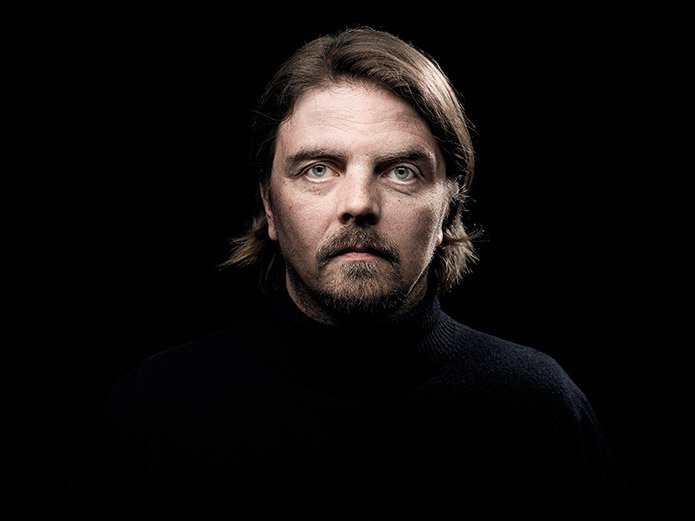 Stepan Sarpaneva: Stepan’s three signature themes are all celestial: his very distinctive moon face; the northern stars and constellations; and the crenellated form of his Korona case – the korona/corona is the plasma atmosphere of the Sun – and all three have been incorporated in MOONMACHINE. Sarpaneva’s two moon faces indicate the phase of the moon through a Korona shaped aperture, while the mystery winding rotor is actually steel and 22k gold disc with laser-pierced stars forming stars and constellations visible in the northern sky.

“The visible movement at the top of HM3 Frog added a technical aspect that provided a serious counterpoint to the playfulness of the bulging frog-eyed indications. In covering the movement, the moon phase and sky hides this and makes the timepiece more poetic. With MOONMACHINE, HM3 is transformed into a fairy tale.” Stepan Sarpaneva

HM3 Frog: The Frog was chosen as the MOONMACHINE platform because the large visible movement opening in the dial side provides space for the watchmaker to play and the bulbous indication domes of the Frog are reminiscent of how science fiction buffs have long imagined habitable domes on the Moon. The Frog differs substantially from HM3 in that it is the aluminium domes that rotate under the sapphire crystals in the Frog, whereas it is the hour and minute hands that rotate around their respective stationary cones on HM3. And this is no ordinary HM3 Frog – if such a thing can be said to exist – the domes of the MOONMACHINE are unique in that they are perpendicular, rather than parallel, to the wrist.

Rotating the large indicator domes posed a number of technical challenges. The domes are machined from solid aluminium to a paper-thin wall thickness of just 0.28 mm to reduce energy requirements to an absolute minimum. The semi-spherical sapphire crystal domes have to be meticulously machined and polished as the slightest imperfection might create disconcerting magnification effects. And the Frog’s unusual method of indicating time necessitated the development of a new gear train for the HM3 engine as the aluminium hour dome of the Frog rotates in 12 hours compared to the 24-hour revolution of the HM3 hour hand.

MOONMACHINE may portray the time in a playful manner, but there is nothing but serious and meticulous attention to detail and care regarding the fine hand-finishing of the high-tuned engine purring within. 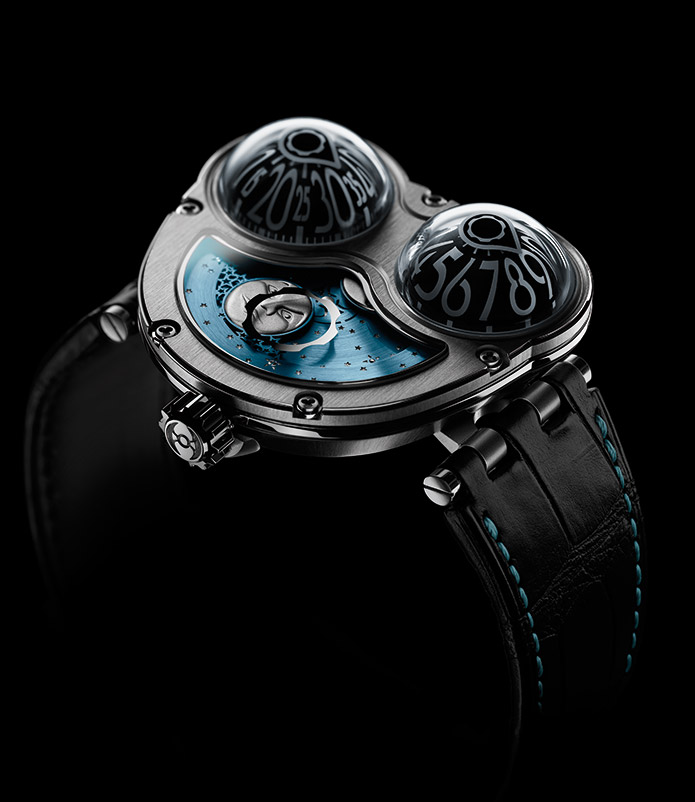 Northern Sky Rotor: The multi-layered northern sky rotor adds a stunning background to the twin hand-finished moon faces.  It also both disguises the potentially distracting HM3 gold winding rotor and makes use of its motion to add vivacity to the moving stars. The stars are laser-pierced allowing light to reflect from the movement underneath and are not simply placed at random: They form the seven brightest stars in Ursa Major, more commonly known as the Big Dipper/Big Plough/Big Bear, plus the seven brightest stars of Ursa Minor, more commonly known as the Little Dipper/Little Bear, which includes Polaris, the North star.

And in a detail watchmakers will appreciate, one of the stars is strategically positioned to allow access for a servicing tool.

The turning star-filled night sky of the rotor not only brings metaphoric life to the MOONMACHINE, but also literally provides life as it generates the power for both the functioning of the moon complication and the movement. The iconic MB&F battle-axe sits in pride-of-place between the two moon faces at the axis of the rotor.

“With MOONMACHINE, HM3 doesn’t just look like it travels through space, it is now a part of space. It becomes a participant not just an observer.” Stepan Sarpaneva.

While a man’s face formed by craters on the Moon’s surface is the result of over-active imaginations, Stepan Sarpaneva has based MOONMACHINE’s moon faces on his own. It doesn’t get much more personal than that!

Be warned: If you kiss the Frog under a full moon, anything can happen! 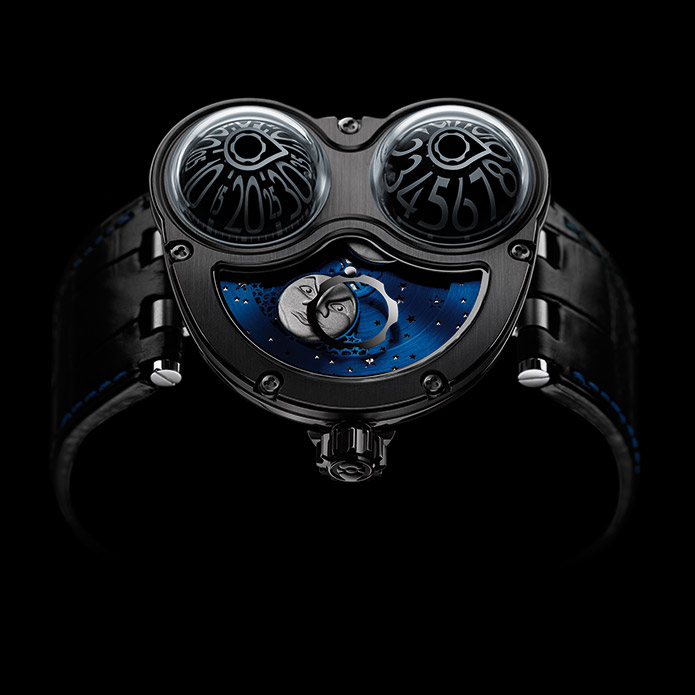 While other planets have more moons – Jupiter has 62 – and larger moons – Saturn’s moon Titan is twice the size of ours – the Earth’s moon is unique in our solar system because at ¼ the size of Earth, it is very large in relation to its planet, which is why it is so influential.
Average distance from Earth:  390,000km
Travelling time from Earth: three days
Gravity: 1/6th Earth gravity
Length of lunar day: 27.3 Earth days
The moon does not rotate in relation to the Earth
Influences on Earth: Causes two tidal cycles per day; often provides light at night; lunar cycle was one of the very first units of time; its gravity attracts many meteors and stops them hitting Earth; stabilises the tilt of the Earth in relation to the sun.

Performance Art pieces are where MB&F offers a timepiece to an outside creator who modifies the Machine according to their taste.
2009: American artist Sage Vaughn made a powerful statement when he imprisoned a butterfly in gold barbed-wire on HM2 for Only Watch 2009
2009: French watch designer Alain Silberstein created the strikingly minimalistic HM2.2 Black Box.
2010: French Jeweller Boucheron created the stunning JWLRYMACHINE by transforming HM3 into a colourfully bejewelled owl.
2011: Chinese artist Huang Hankang enabled children’s dreams to soar free with HM4 piloted by a flying panda for Only Watch 2011.
2012: Finnish watchmaker Stepan Sarpaneva endows HM3 Frog with his passion for the Moon and the stars in the MOONMACHINE. 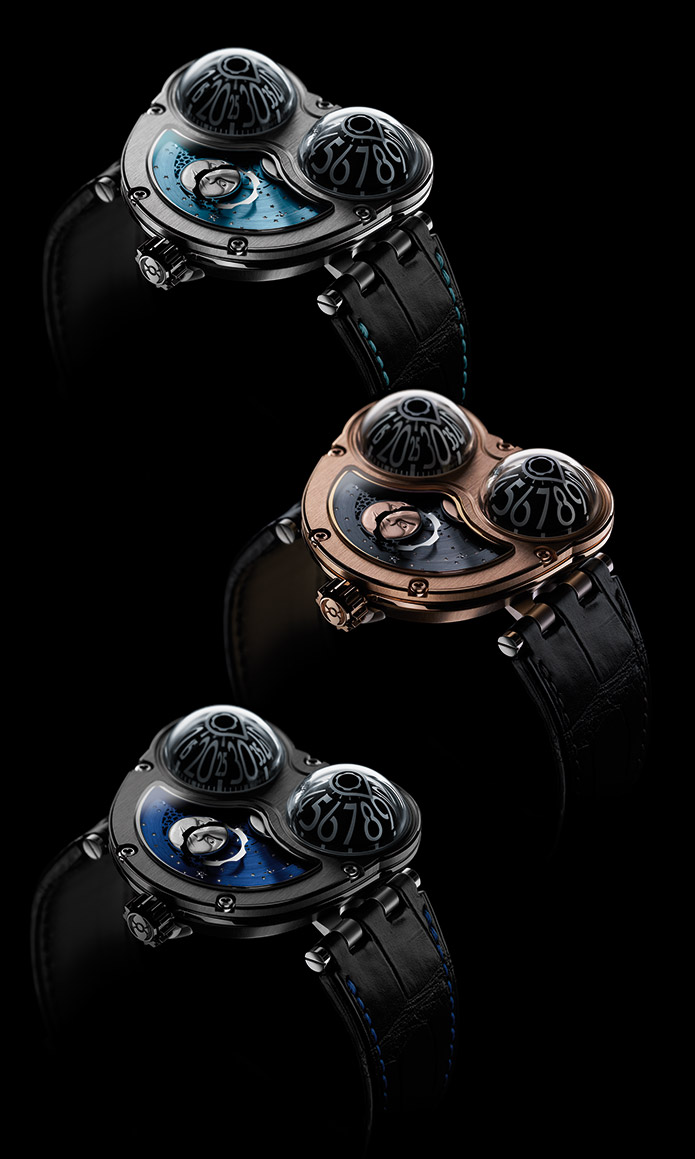 MOONMACHINE is based on a specially configured HM3 Frog and the moon complication was imagined, designed and created by Stepan Sarpaneva. It is available in three limited editions of 18 pieces each.

Powered by a Sowind base, modified by Stepan Sarpaneva

Number of jewels: 36 (all functional)

Hour on one dome (aluminium dome rotating in 12 hours)

Domes and both display backs with anti-reflective treatment on both faces.
Dials: 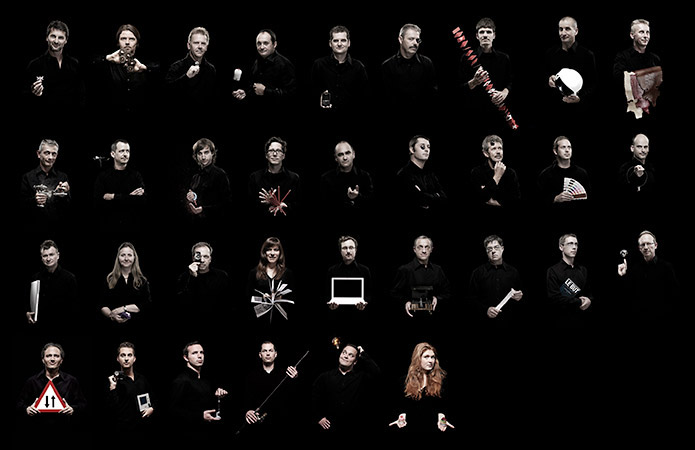 Hand-finishing of movement components: Jacques-Adrien Rochat and Denis Garcia of

Case and buckle construction and production: Dominique Mainier and Bertrand Jeunet of