The Legacy Machine 101 (LM101) series was first launched in 2014. As suggested by its “101” name, it focuses on the essentials of a mechanical wristwatch, contained in one of MB&F’s most compact Machines with a case diameter of 40mm. At the time, the LM101 movement was also the first entirely conceived by MB&F’s in-house engineering team. 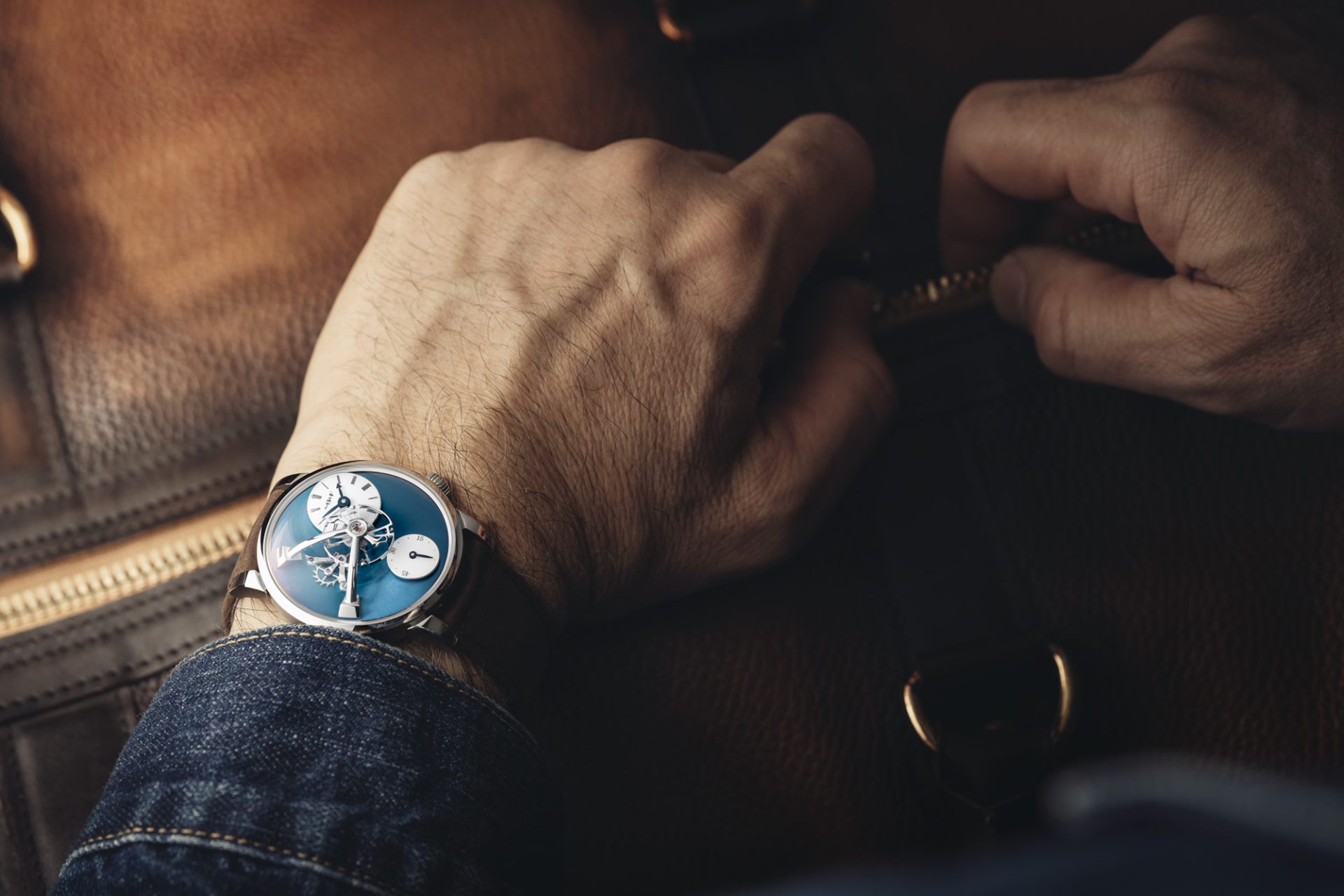 In 2021, the LM101 series evolves with technically and aesthetically-upgraded versions distinguished by colourful dial plates, including a stainless steel version. Focusing further on the essentials, the bezel and “Legacy Machine” engraving on the dial withdraw to highlight the time and power reserve, indicated on slightly larger subdials; and the star of the show, the signature “flying” balance wheel, inherits a double hairspring.

Legacy Machine 101 embodies and accentuates the very essence of what is essential in a wristwatch: the balance wheel, which is responsible for regulating precision; how much power remains in the mainspring, which indicates when it needs to be next wound; and of course, the time.

Visually, LM101 is dominated by the monumental suspended balance wheel, its sedate oscillations drawing the eye ever closer. Two pristine-white subdials hover just above the fine sunray-engraved movement top plate. At the top right, highly legible hours and minutes are displayed by beautiful blued-gold hands contrasting against the immaculate white, while the 45-hour power reserve indicator is displayed in a smaller, but similar subdial below. Two ‘Frost’ limited editions presented in 2015 provided additional contrast between these elements and the effervescent backdrop of their hand-finished frosted dial plates.

In an apparent feat of magic, the sapphire crystal protecting the dial appears to be invisible; creating the illusion that you can reach out and touch the prodigious balance wheel hanging mesmerisingly from elegant twin arches. The arches are milled from a solid block of metal and require many hours of hand polishing to achieve their mirror-like lustre. 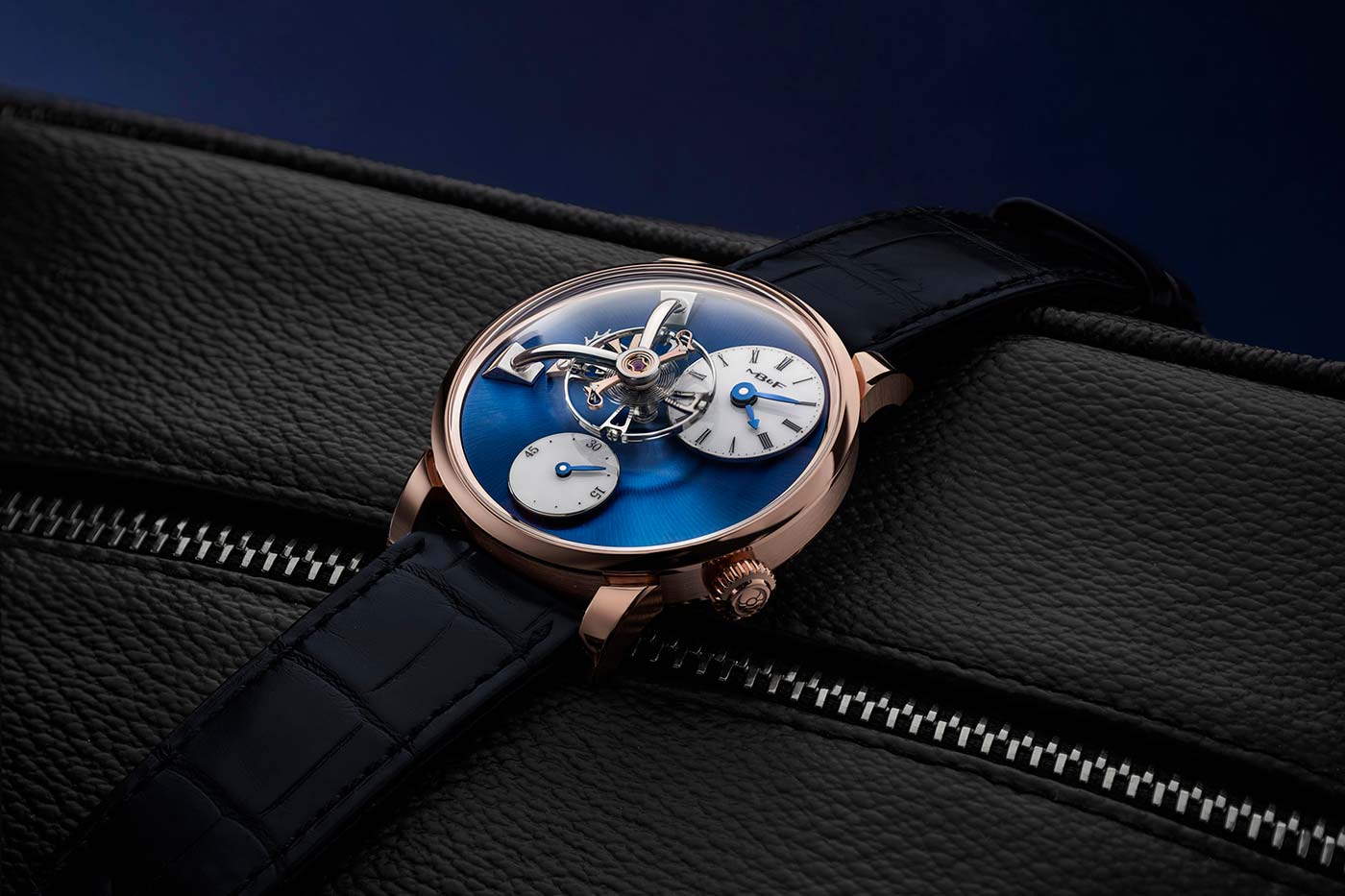 Turning over Legacy Machine 101, the display back crystal – domed to reduce the thickness of the caseband and, visually, the height of the watch – reveals the exquisitely hand-finished movement. Sensually curved plates and bridges pay homage to the style found in high quality historic pocket watches and testify to the respect accorded to historical legitimacy.

With its undulating Geneva waves, hand polished bevels, gold chatons and countersunk blued screws, the beauty of LM101’s movement doesn’t just stay faithful to a bygone era. It also heralds the dawn of a new epoch as it was the first MB&F calibre to be entirely conceived and designed in-house. Indeed, while award-winning independent watchmaker Kari Voutilainen took responsibility for the movement’s fine finishing specifications and fidelity to the horological past, its architecture and construction are 100% pure MB&F.

LM101 was first launched in 18k red or white gold, then in two limited ‘Frost’ editions with frosted finishing (18 and 33 pieces), followed by limited editions of 33 pieces in platinum 950 and 18 pieces in palladium. The 2021 upgraded versions are available in 18k white gold with a purple dial plate, 18k 5N+ red gold with a royal blue dial plate, and stainless steel with a light blue dial. 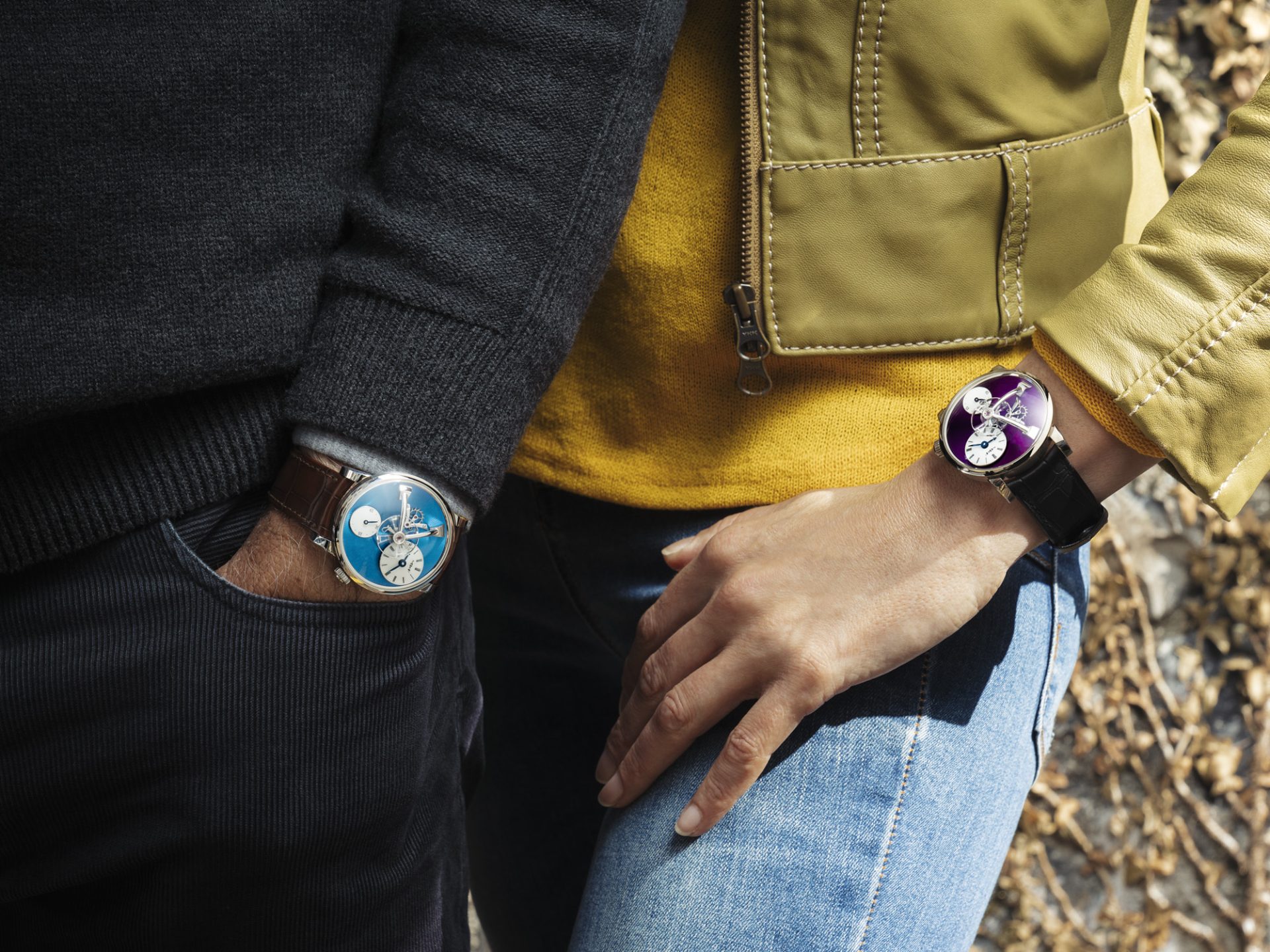 Engine: While the movement of Legacy Machine 101 is superficially similar to that of Legacy Machine No.1, closer examination reveals that it is an entirely different calibre. It is not merely a scaled down version of LM1’s movement, but was specifically conceived and developed in-house by MB&F with the objective to fit in a 40mm case.

The balance wheel and spring are at the very heart of any mechanical watch movement and their isochronal (equal intervals of time) oscillations regulate the movement’s precision. MB&F founder Maximilian Büsser has long been fascinated by the large slowly oscillating – 2.5 Hz/18,000 vph compared with the much faster 4 Hz/ 28,800 vph more common today – balance wheels of antique pocket watches. So it was no surprise that this was his starting point.

What was surprising though is just how radically he re-interpreted tradition by relocating the balance wheel from its more usual position hidden at the back of the movement to majestically floating not just the above movement but high above the dial.

If you thought that the balance wheel looks impressive in Legacy Machine N°1, it looks even larger in the smaller diameter setting of LM101.

Dial and Indications: While the animated suspended balance visually dominates LM101, the immaculate white dials for the time (hours and minutes) and power reserve indications are both aesthetically appealing and highly legible thanks to the high contrasting blue hands.

Complementing the three-dimensionality of the balance floating in space, the white dials with their bright blued-gold hands float just above the top of the movement. The dials are gently domed with a translucent, high-gloss lustre created using a laque tendue process in which multiple layers of lacquer are applied and heated, causing them to stretch over the surface of the dials.

To ensure aesthetic purity of the dials, a sophisticated fixation underneath removes the necessity of visually obtrusive attachment screws. A fine golden perimeter circumscribing each dial elegantly reinforces their timeless classicism.

A finely engraved sun-ray pattern on top of the movement plate (dial side) subtly catches the eye at certain angles without distracting attention from the white dials of the time and power reserve indications and suspended floating balance. But it is in the style and finish of the bridges and plates visible through the display on the back of the movement where Kari Voutilainen has excelled in providing exquisite historical fidelity in both the shape of elegantly curved bridges and the traditionally wide space between the bridges and between the perimeter of the bridges and the case.

On the back of the movement, over-sized ruby jewels set in highly-polished countersunk gold chatons provide striking visual counterpoints to the Geneva waves. While providing historical links with the large jewels seen in high-grade antique pocket watch movements, the ruby bearings have a practical application in reducing wear/increasing longevity by accommodating large diameter pinions and holding more lubricating oil.

Frosted finish for the Frost editions: In the late 18th and early 19th centuries, frosting was created by treating the components with a special acid mixture and then heating on an open flame (what could possibly go wrong). The result was a silvery-white effect looking similar to frost, which protected the surfaces from oxidation; this was important when watches and clocks were not water resistant at all.

As watchmakers became more attentive to the potential hazards associated with working with powerful acids, alternative methods were explored, the most effective – in terms of the quality of finish – being to very carefully brush the surface with a wire brush. However, it is extremely difficult to obtain a uniform result because just slightly too much pressure or brushing for too long can quickly ruin the desired matte surface with uneven polish.

Today there are very few craftsmen with the skills and experience necessary for creating a traditional frosted finish, and they closely guard their secrets. Modern traditional brushed frosting actually burnishes the surface (compresses the metal without removing material), creating a finish so hard that it is impossible to hand engrave. 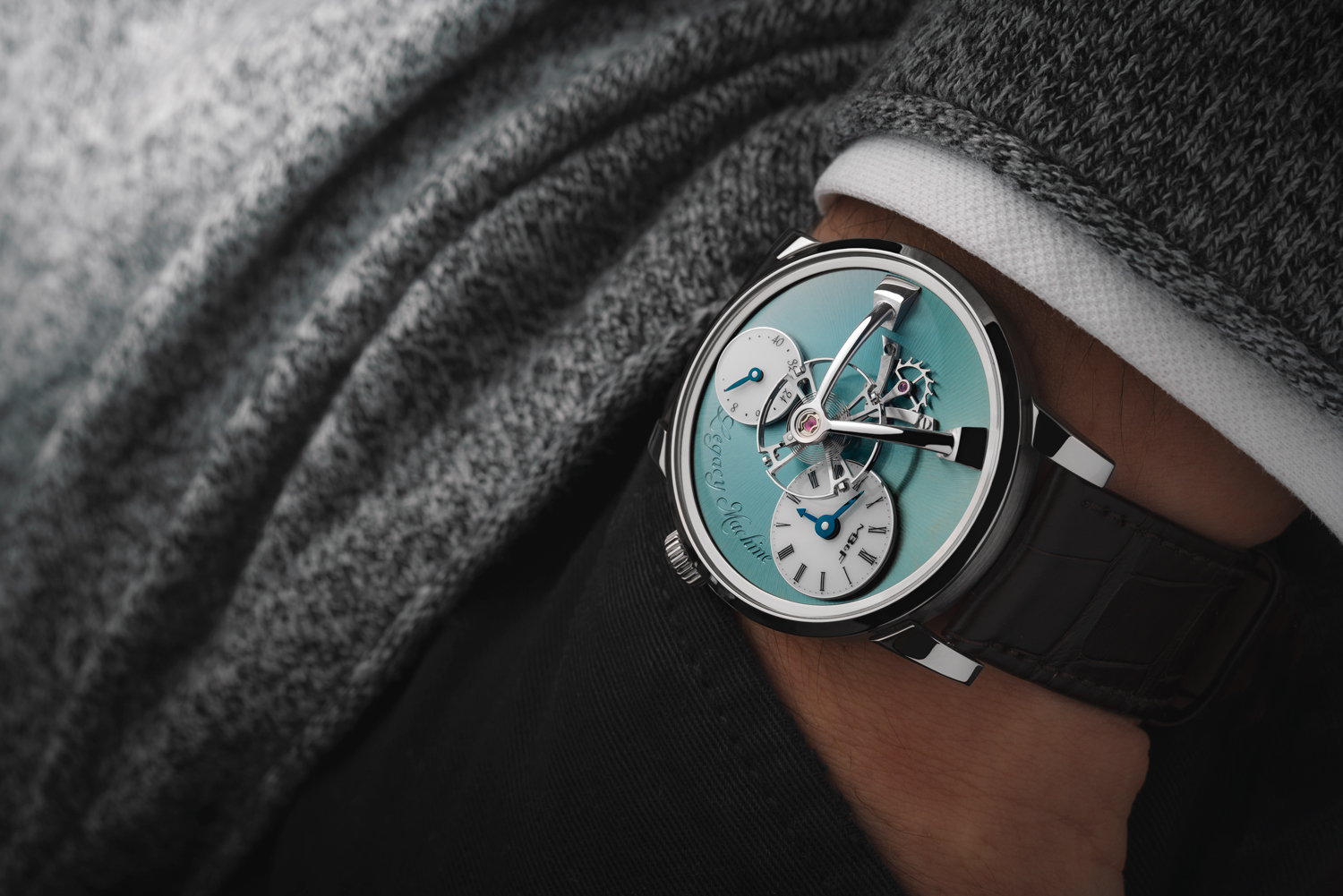 MB&F’s Legacy Machines were conceived when Maximilian Büsser started fantasising: “What would have happened if I had been born in 1867 instead of 1967? In the early 1900s the first wristwatches appear and I would want to create three-dimensional machines for the wrist. There are no Grendizers, Star Wars or fighter jets for my inspiration but I do have pocket watches, the Eiffel Tower and Jules Verne. So what might my early 20th century machines look like? They had to be round (tradition) and three-dimensional (MB&F Machine): Legacy Machines are the answer.”

Maximilian Büsser has had a long affinity with pocket watches of the 18th and 19th centuries. Virtually all horological complications we see today were not only imagined in that period, they were developed using just paper and pen (no sophisticated computer programs), components were produced to extremely high precision using – by today’s standards – fairly primitive machines (no electricity) and finely finished, assembled and regulated to an incredibly high quality that we still strive to match today. Their generous size compared with modern wristwatches allowed for uncluttered movement architectures with beautifully shaped bridges and plates.

While MB&F’s futuristic Horological Machines have a firm foundation in the very best of traditional horology, Büsser wanted to pay homage to that rich tradition by imagining the type of timepiece he might create if he had been born a 100 years earlier. With its large, sedately oscillating balance, domed dials, historical bridge design and classical fine-finishing, Legacy Machines are the very contemporary, yet traditionally elegant fruition of that dream. 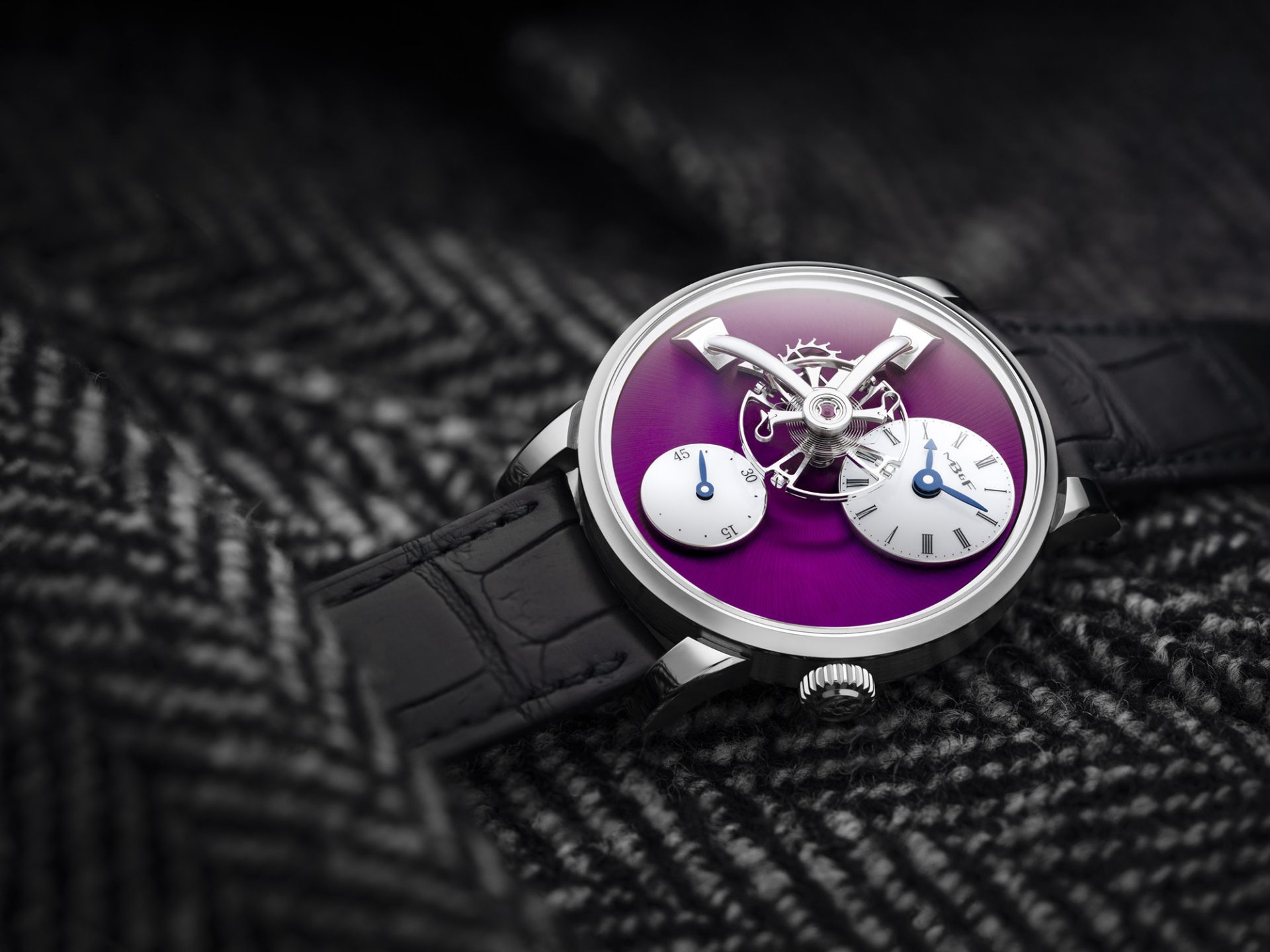 High domed crystal sapphire on top and box sapphire crystal on back, both with anti-reflective coating on both sides 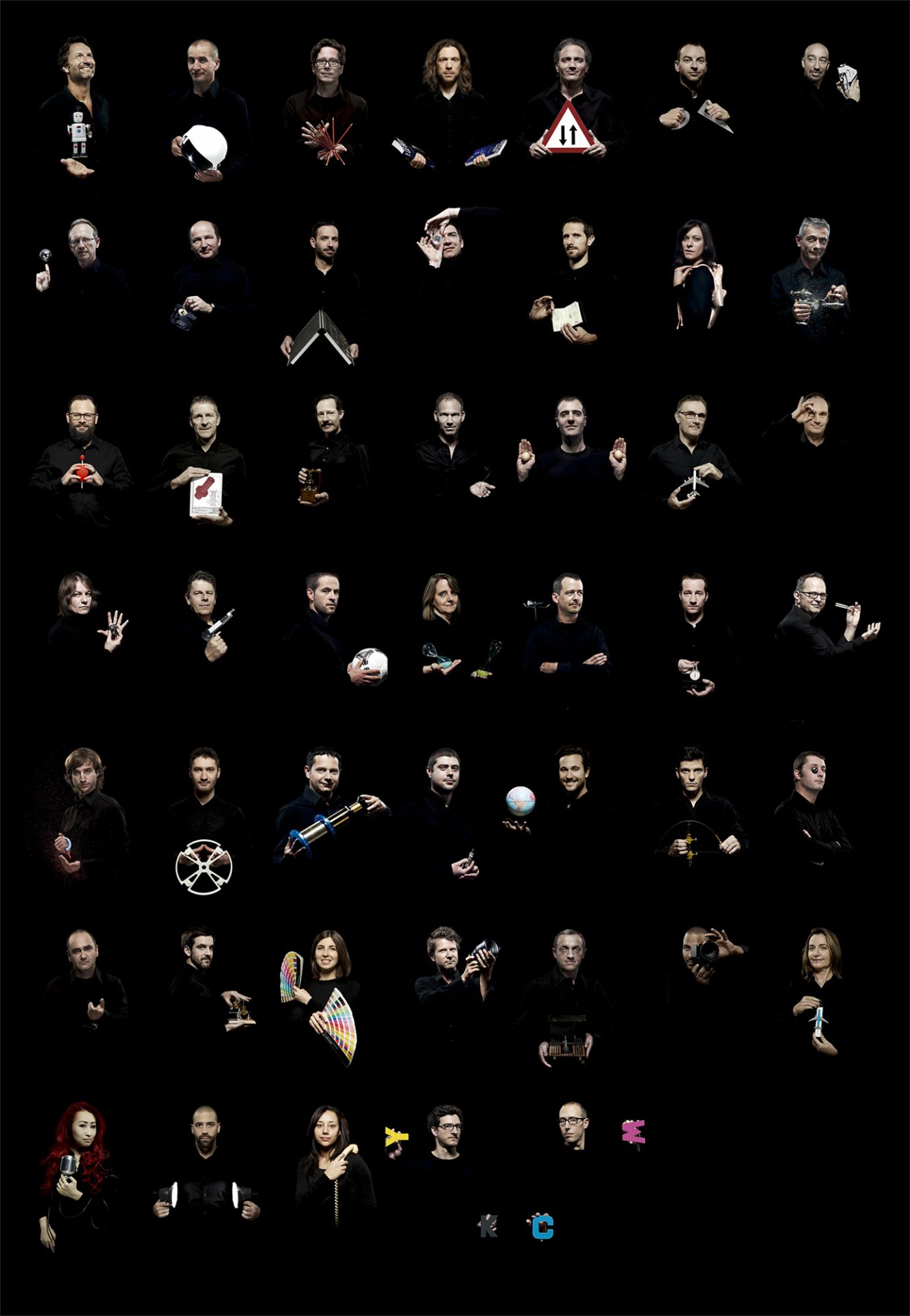 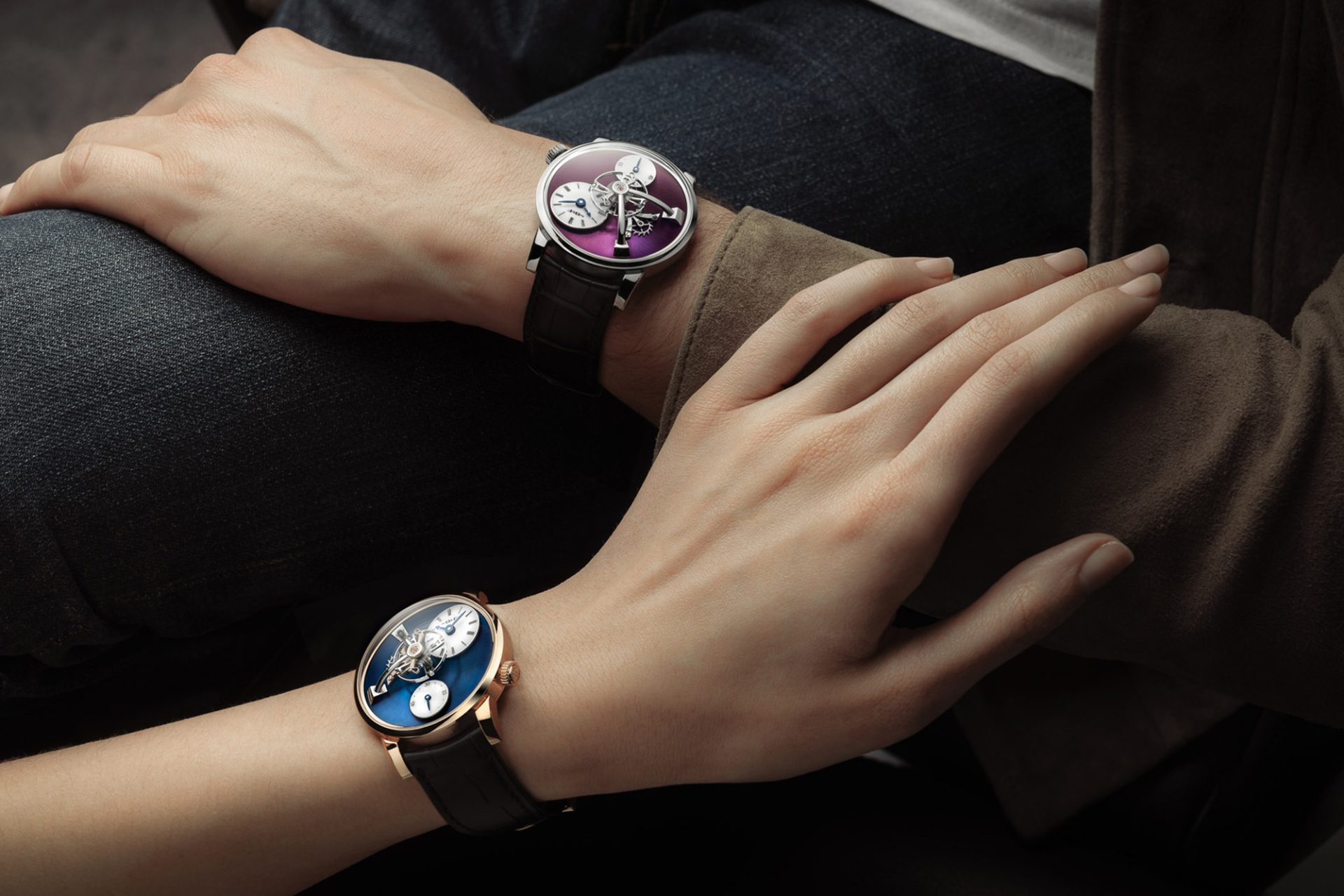