Even the most unpredictable and audaciously led lives, when observed from a distance, form patterns and fall into cycles. This is a fundamental truth that underlies all human existence, whether individual or collective. For Maximilian Büsser and MB&F, creative energy comes in seven-year cycles. It was in MB&F’s seventh year that the Legacy Machine collection was born, that the first M.A.D.Gallery opened in Geneva and opened the door to the MB&F co-creations. 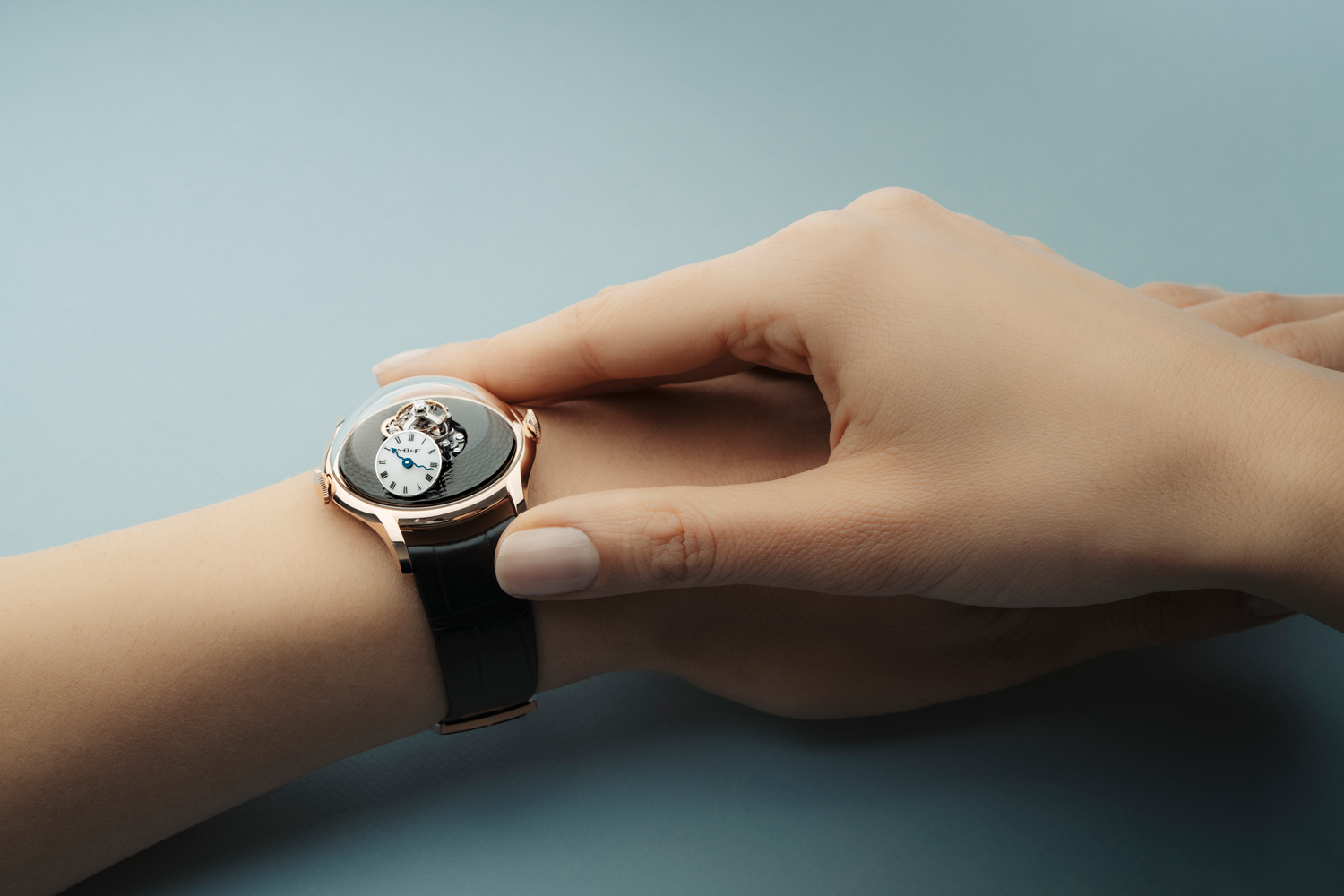 The 14th year of MB&F unveiled a new avenue of horological exploration, an evolution of creative horizons for founder and company alike: the Legacy Machine FlyingT, first launched in 2019, is the first of MB&F’s three-dimensional horological art pieces dedicated to women.

A round case in gold or platinum, with a steeply cambered bezel and slender, elongated lugs, often fully set with diamonds. A high, extravagantly convex dome of sapphire crystal rises from the bezel. Beneath the dome, a subtly curved dial plate in various finishes: liquidly black with layers of stretched lacquer, guilloche, vibrant gemstonesor glittering with blazing white diamonds.

An asymmetric ventricular opening in the dial plate frames the heart of the LM FlyingT engine – a cinematic flying tourbillon that beats at a serene rate of 2.5Hz (18,000vph). The tourbillon projects high above the rest of the engine, a kinetic, dynamic column that stops just short of the apex of the sapphire crystal dome. Affixed to the top of the upper tourbillon cage is a single large diamond that rotates simultaneously with the flying tourbillon, emitting the fiery brilliance of the very best quality stones.

At the 7 o’clock position – another reference to the numeric theme that runs throughout LM FlyingT – is a dial of black or white lacquer (or gemstone) that displays the hours and minutes with a pair of elegant serpentine hands. The dial is inclined at a 50° tilt so that the time can be read only by the wearer, an intimate communication that highlights the personal nature of LM FlyingT.

On the reverse, the automatic winding rotor takes the shape of a three-dimensional red gold sun with sculpted rays, providing LM FlyingT with four days of power reserve. 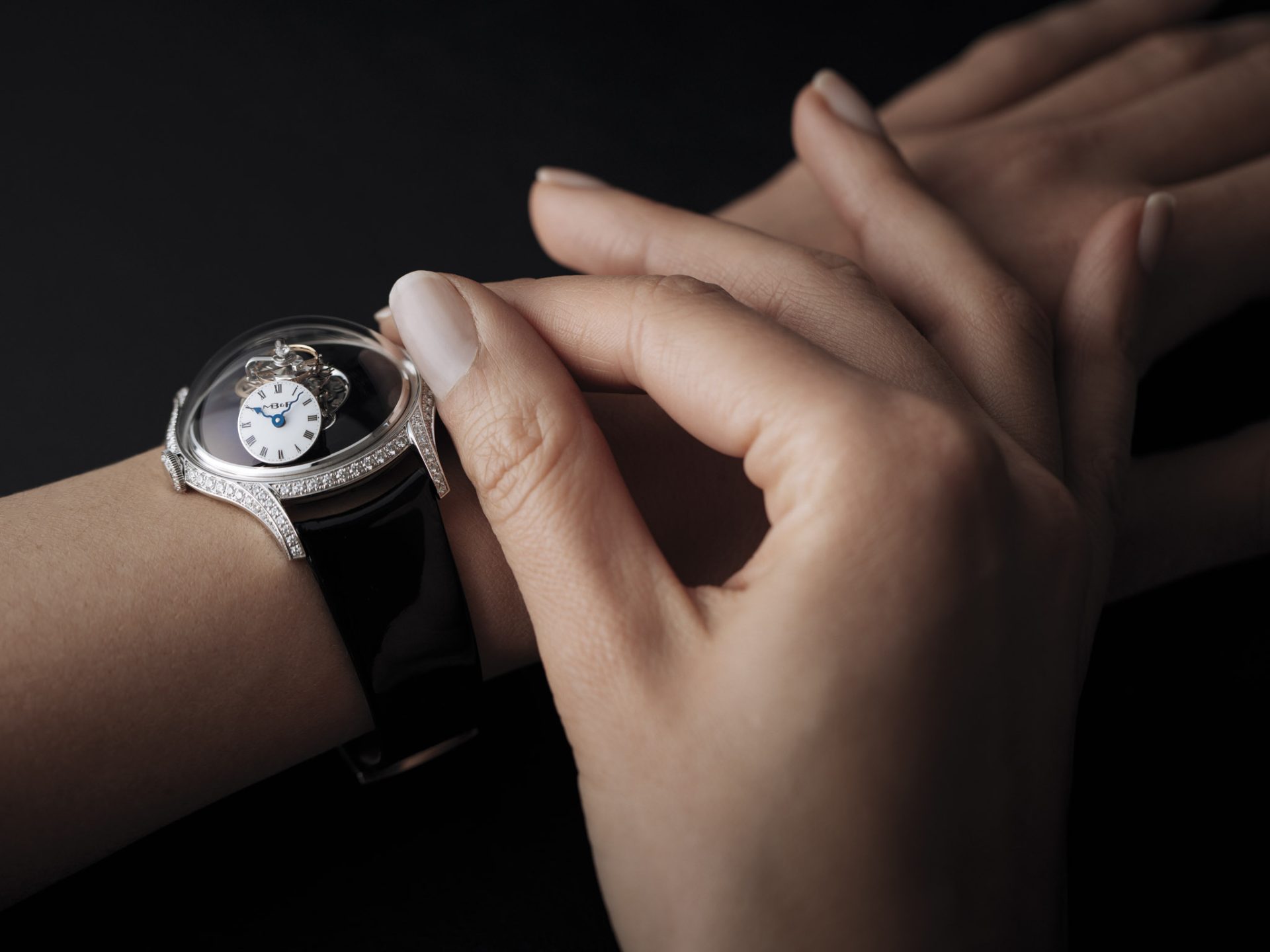 The design of Legacy Machine FlyingT is replete with associations drawn from the feminine and maternal influences in Maximilian Büsser’s life. Says Büsser, “I wanted LM FlyingT to possess the epitome of femininity as reflected by the women in my life, particularly my mother. It had to combine supreme elegance with tremendous vitality. The column-like structure of the flying tourbillon was very important to me as I felt very strongly that women form the pillar of humanity. At the same time, there is another layer of meaning coming in from the sun-shaped rotor, which incorporates the element of life-giving, a source of sustenance which we gravitate towards and around.” 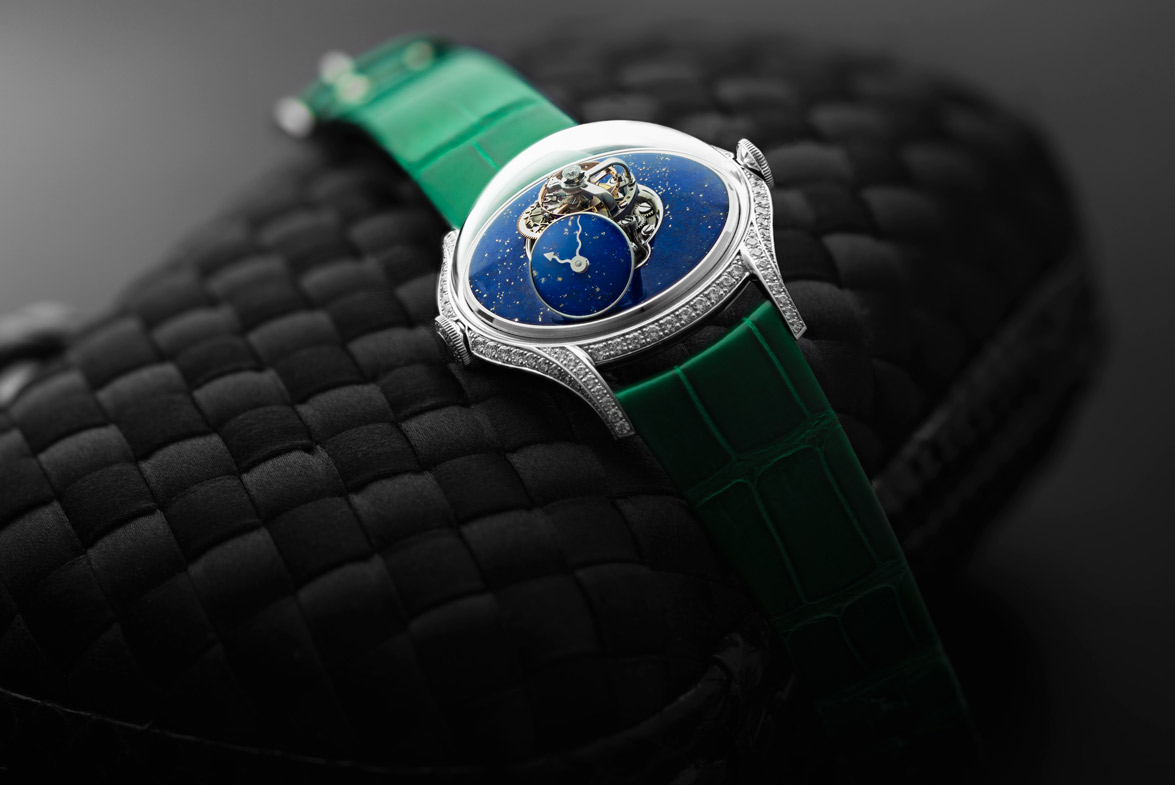 The creative process behind Legacy Machine FlyingT started four years ago, when Maximilian Büsser began thinking about making something inspired by the feminine influences in his life. Says Büsser, “I created MB&F to do what I believe in, making three-dimensional sculptural kinetic art pieces that give the time. I was creating for myself, which is the only way we could have made all these crazy and audacious pieces over the years. But at some point there came a desire to create something for the women in my family. I’ve been surrounded by their influence all my life, so I gave myself the challenge to do something for them.”

Inspiration came from the combination of seemingly incompatible qualities that characterised the greatest feminine figures in Maximilian Büsser’s life. Elegance was key, but so was an infectious energy that could captivate an entire roomful of people. The lines and composition of Legacy Machine FlyingT epitomise these qualities, being as refined and pure as any other Legacy Machine, but with the dynamism and exuberance of a central flying tourbillon.

The intimate and personal nature of LM FlyingT led to the ultimate placement of the time indication at the 7 o’clock position on the dial plate, with the dial tilted 50° to face the wearer. The message is subtle but clear – that whoever the owners and wearers of Legacy Machine FlyingT may be, their time belongs to them and no one else.

UNLOCKING THE FEMININE SIDE OF MB&F 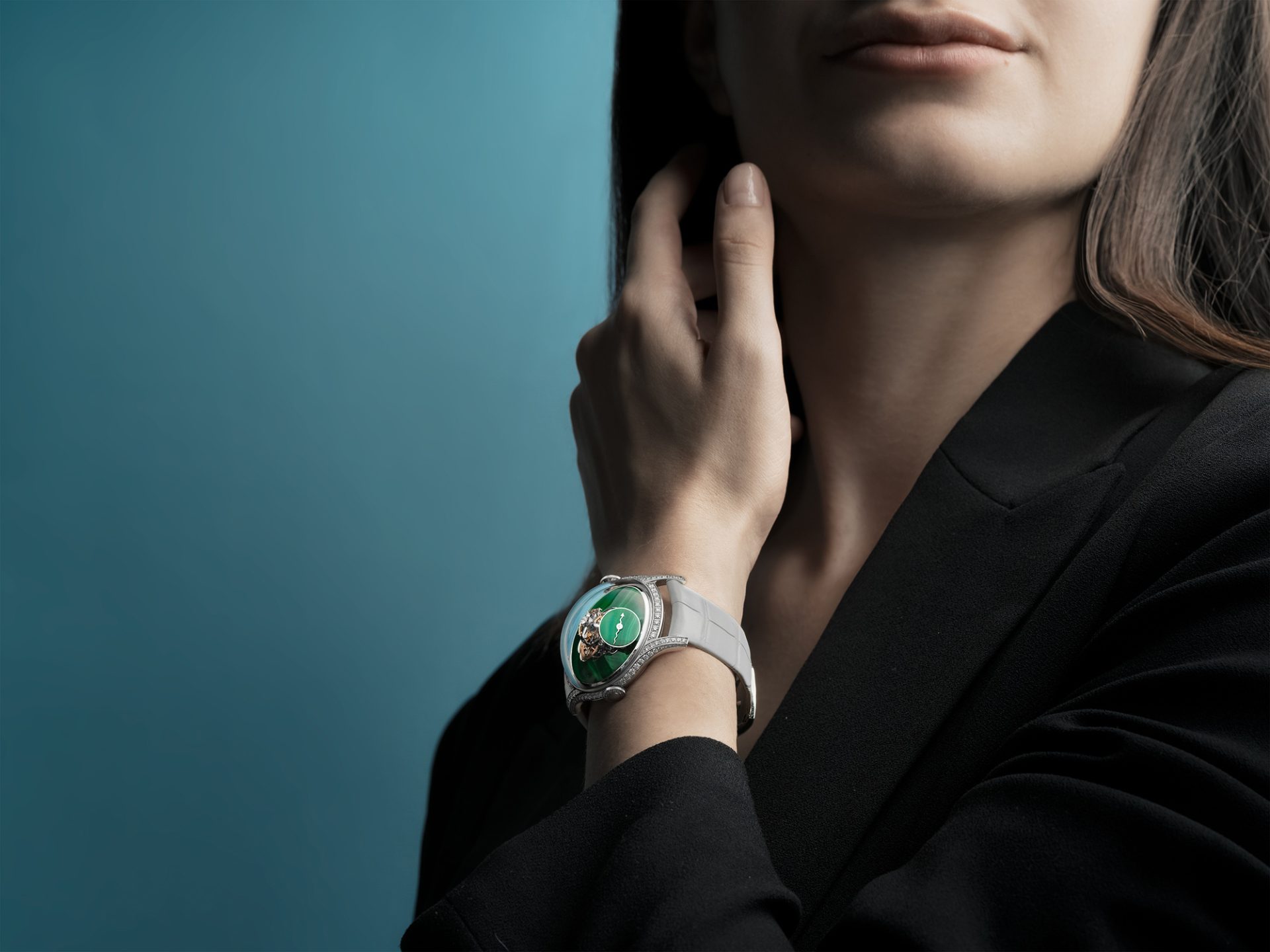 “The last thing I wanted to do,” says Maximilian Büsser, “was to take a masculine timepiece, resize it, put a different colour on it and call it a ladies’ watch.” Each MB&F creation is drawn together in a complex process that is equal parts original Max Büsser concept, design finesse by Eric Giroud, and mechanical ingenuity by the in-house technical team. Aesthetic and philosophical coherence is essential to the final result, from the adventurous Horological Machine N°5 “On The Road Again” to the high-complication, technically ambitious Legacy Machine Perpetual.

To bring out a different level of refinement for the feminine LM FlyingT, the Legacy Machine case was completely redesigned. Case height and diameter were reduced in order to shift the focus to the highly convex sapphire crystal dome. The lugs were slimmed down, their curves were emphasised, and deep bevels were introduced to create a more elegant profile.

Harsh or particularly defined lines have been tempered throughout LM FlyingT, such as in the example of the hour and minute hands, which take on an undulating shape – echoed in the rays of the sun-shaped automatic winding rotor.

Asymmetry is highlighted in the design of LM FlyingT, from the positioning of the time display at 7 o’clock to the ventricular dial-plate aperture that frames the emerging tourbillon. Even the tourbillon cage itself embraces asymmetry, opting for a cantilevered double-arch upper bridge instead of the symmetrical battleaxe which has topped all other MB&F tourbillons.

Woven throughout Legacy Machine FlyingT are subtle references to the aspects of femininity that resonate strongest with Max Büsser, such as the solar motif of the automatic winding rotor and the column construction of the tourbillon, which introduce concepts of life-giving and support.

The mechanical antecedents of Legacy Machine FlyingT lie mostly in the Horological Machine collection, namely with the HM6 series and HM7 Aquapod. 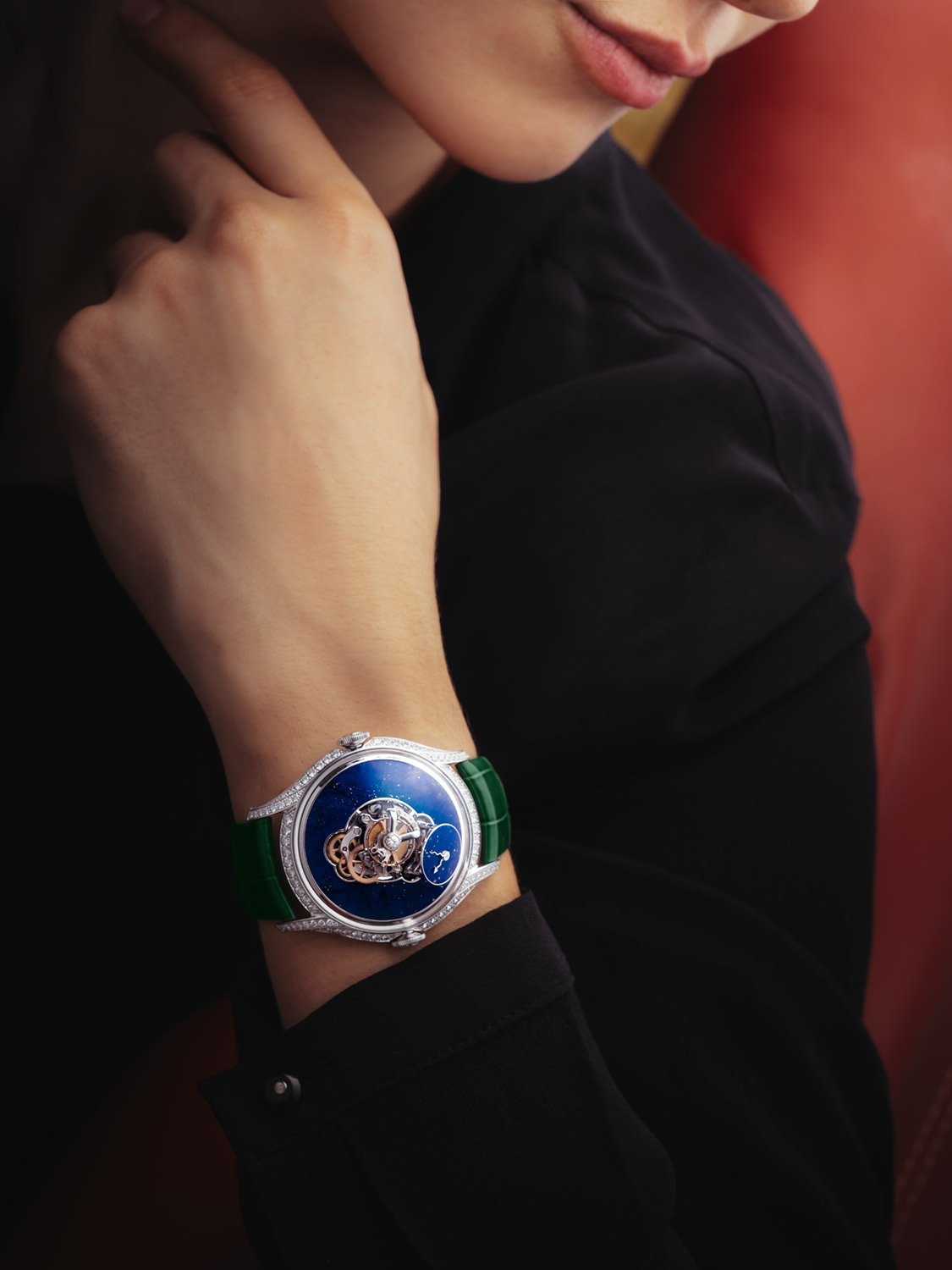 In a departure from most modern watch movements, which take a radial and co-planar approach to movement construction, the LM FlyingT engine utilises a vertical and co-axial approach. The cinematic flying tourbillon, which boldly projects beyond the dial-plate of LM FlyingT, is a visually stunning example of the rotating escapement and stands in stark contrast to other flying tourbillons, which usually do not venture past the confines of their surrounding watch dials.

Flying tourbillons, as their name suggests, are anchored only at their base, with no stabilising bridge to restrict lateral motion at the top. This increased need for overall rigidity is what causes the conservative placement of most flying tourbillons within their movements. Legacy Machine FlyingT breaks free of this limiting need for movement security and confidently displays its flying tourbillon in all its glory.

In order to display the time as precisely as possible on the 50° inclined dial, conical gears were employed to optimally transmit torque from one plane to another, a solution first used in HM6 and subsequently in HM9 Flow.

The 280-component engine of Legacy Machine FlyingT has a power reserve of four days (100 hours), which is among the highest within MB&F, a testament to the growth of in-house expertise and experience. 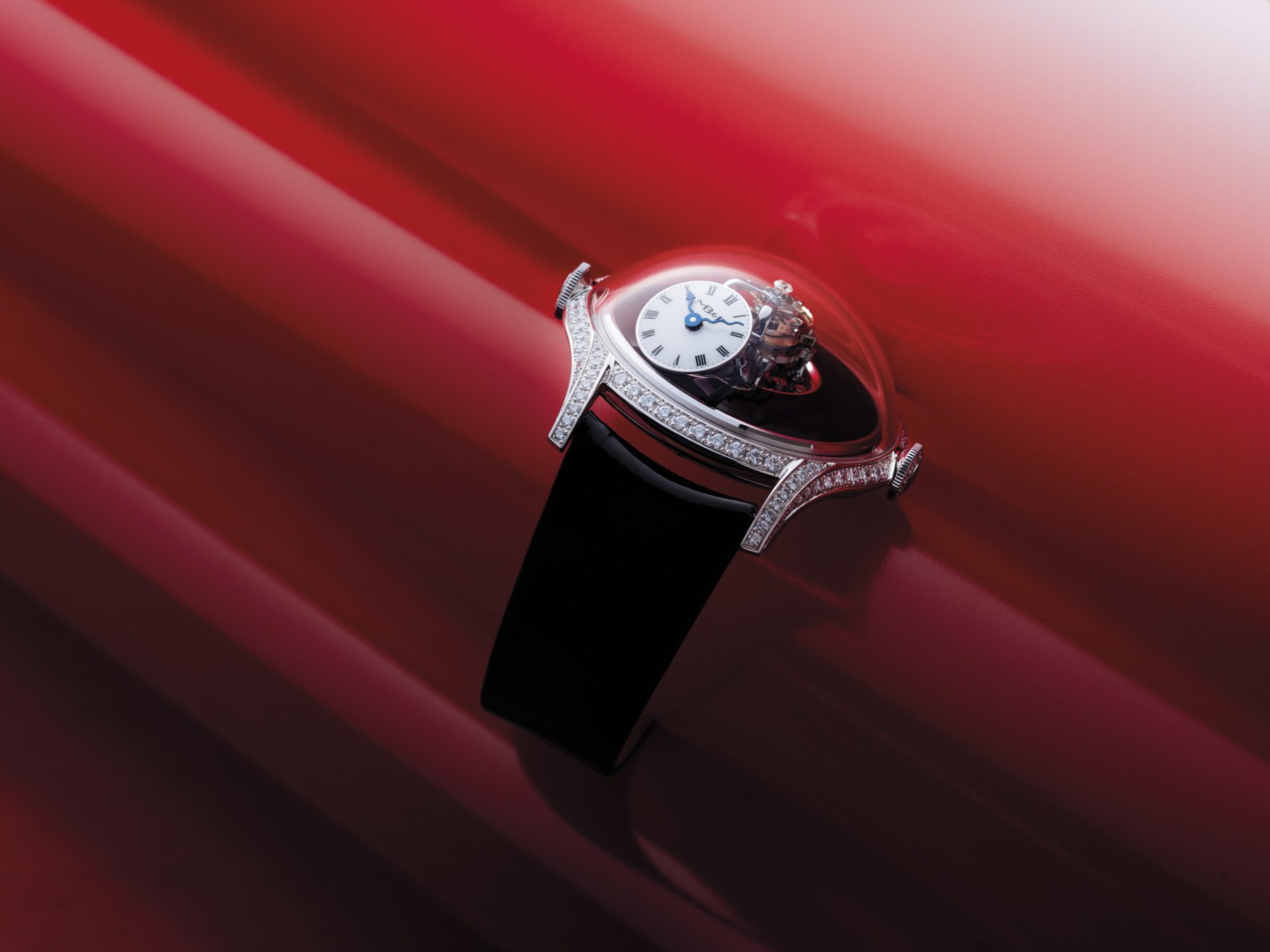 Hours and minutes displayed on a 50° vertically titled dial with two serpentine hands.

Two crowns: winding on left and time-setting on right.

‘FRIENDS’ RESPONSIBLE FOR THE LM FlyingT 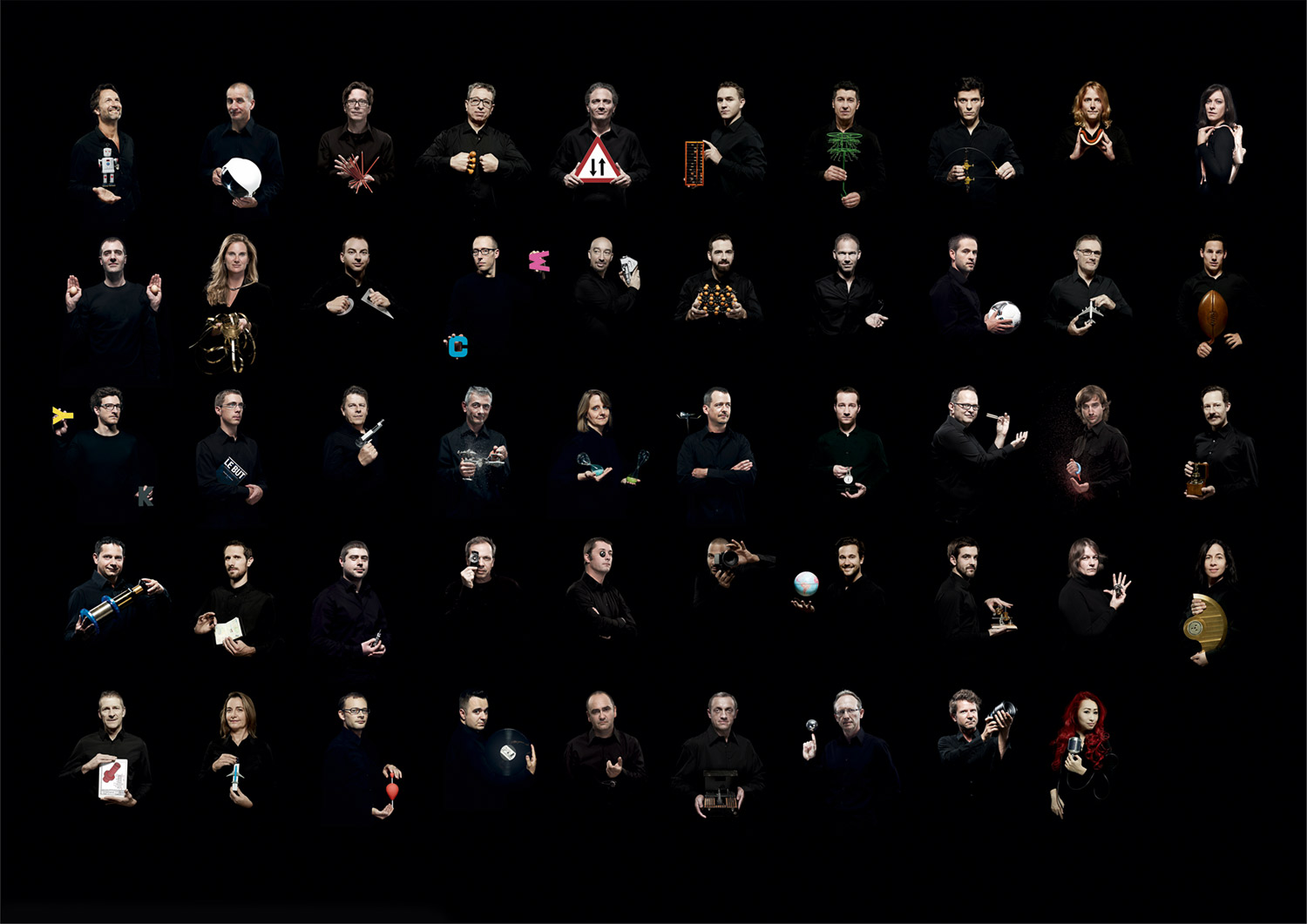 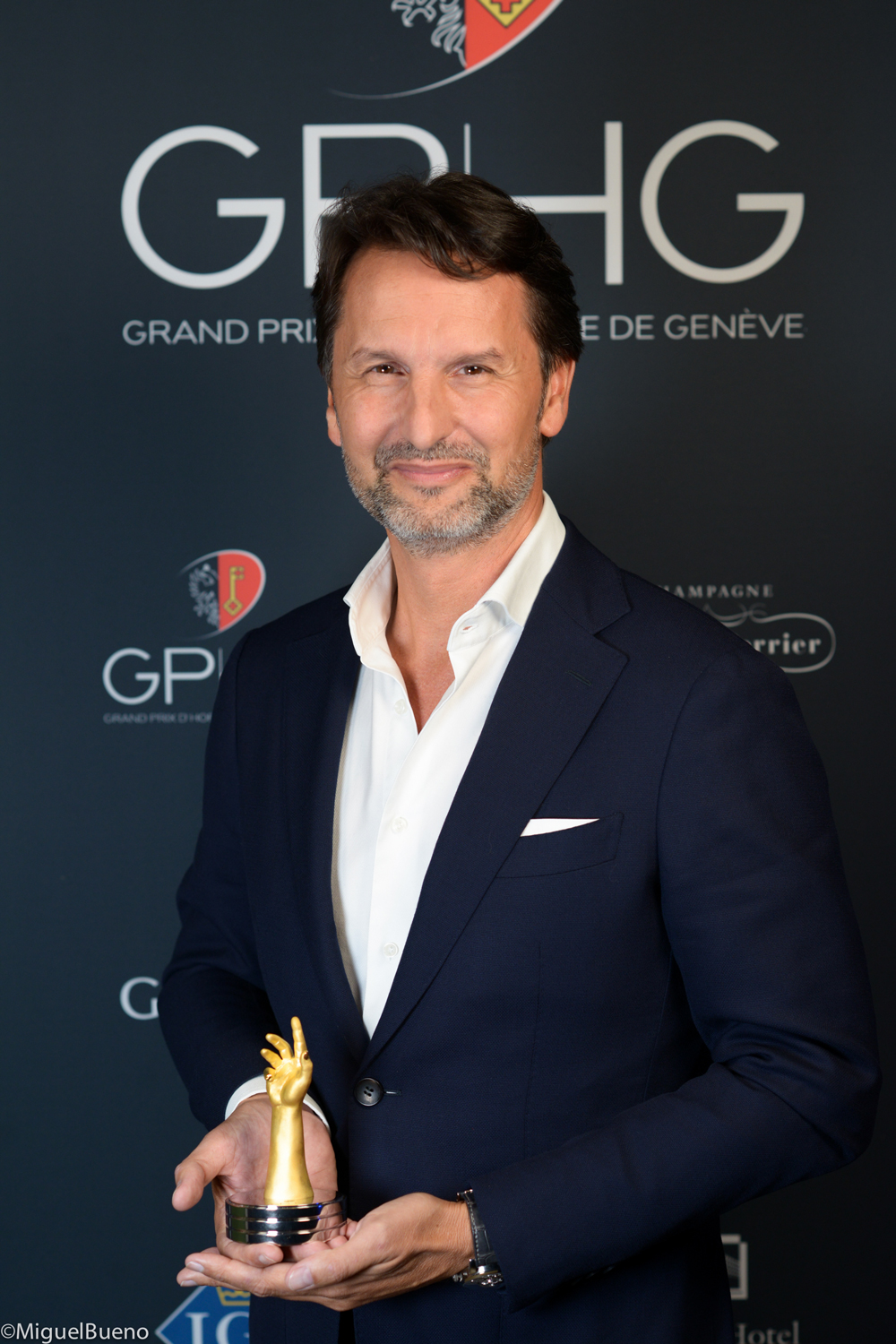 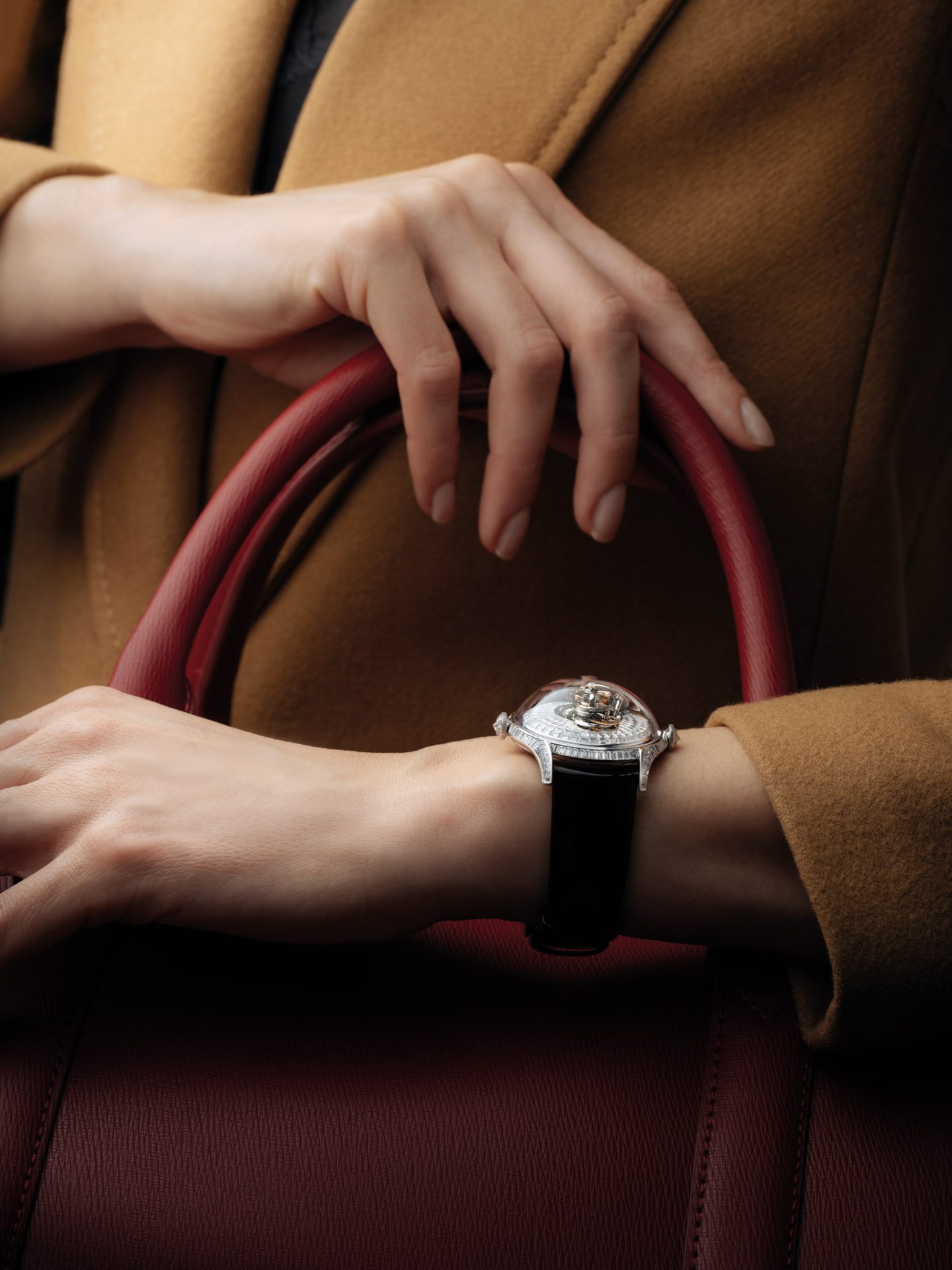