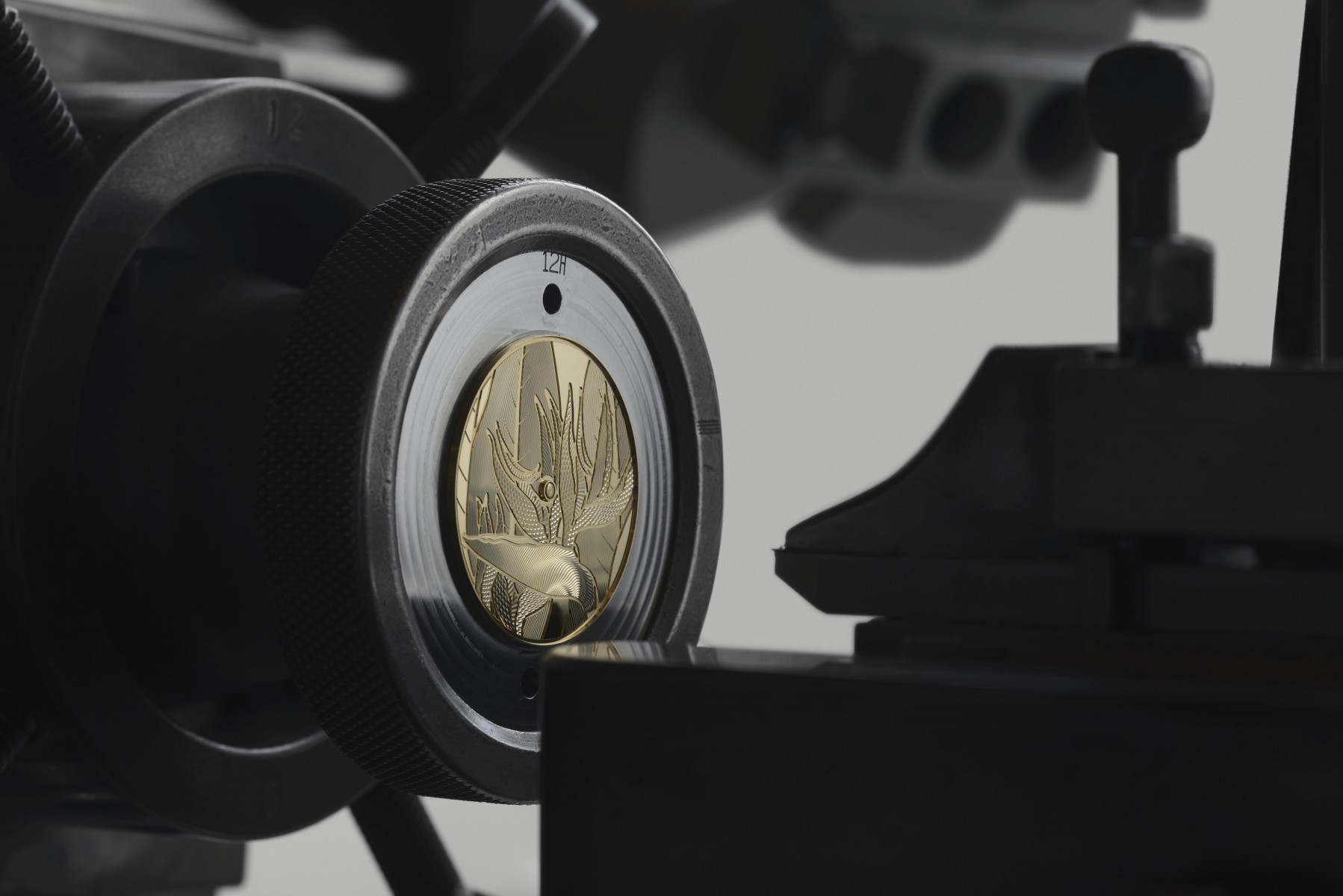 The art of guilloché is not simply explained; it is sensed and admired, requiring infinite time and two expert hands. “Guilloché is the artistic production of mechanised decoration done by incising metal, generally gold, and based on a geometric system of repeated lines”, explains Vacheron Constantin’s master guillocheur.

In concrete terms, a guillocheur uses two separate machines to produce the designs. The first is an in-line machine for linear and rectilinear designs. The second is a lathe machine for circular and curved designs. The traditional patterns carry names such as “Clous de Paris” (hobnail) or “barleycorn”. When the design radiates from the centre, like Vacheron Constantin’s famous “rayon de gloire” (beam of glory), it is called “flinqué.” Whatever his choice, the artisan guides the guilloché of symmetrical motifs with extreme dexterity and an innate sense of aesthetics.

With one hand, he turns the crank driving the part to be decorated and with the other, he pushes the carriage bearing the burin to engrave fine and regular lines. By playing with the shape, spacing and criss-crossing, he can give free rein to his imagination and create an infinite variety of decorations. It is an ancestral, rare and unique art exercised on machines from another age. The machines on which Vacheron Constantin’s artisans work are all vintage, the most recent dating from 1950 and the oldest from the 1800s.

While the origins of guilloché work are mysterious, it is said to have been inspired by the architectural decorations in the form of drops of water made in stone by Italian artists in the 16th century. The Italian word goccia (drop) is thought to have given rise to ghiocciare, an ancient term translated as “guillocher“. A second etymological alternative attributes the origin of the word to a late 18-century French worker named Guillot who invented a pedal-operated machine tool designed to engrave interlaced curves that were perfectly suited to watch decoration.

On these very old machines, excellence depends largely on the artistic sensitivity and skill of the craftsman. He configures the design, measures the pressure exerted on the burin and controls the speed of execution, creating the pieces one by one to make each one a unique work. “What counts is the beautiful legibility of the decoration and the play of light and shade”, explains Vacheron Constantin’s master guillocheur. “Perception must be immediate while finding a middle path that is all about subtle refinement and tangible presence. This implies striking a good balance between discretion and the revelation of innovative excellence.”

The result with its many light effects is incomparable to that which would be obtained through modern industrial processes. One thus refers to “hand guilloché” to distinguish this extraordinary work, today executed in miniature form on the limited surface areas of wristwatches: dials, cases or movement components such as the oscillating weights.

“The machine is merely an extension of the human touch.”

As of 1780, the date of the Maison’s oldest watch to feature this pattern, the Manufacture began adorning its timepieces with an infinite wealth of guilloché work. Even today, these motifs engraved in hollows on the various metal bases are entirely hand-crafted. The machine is merely an extension of the human touch. “Line-by-line guilloché patterns require great concentration, regularity and accuracy”, notes Vacheron Constantin’s master guillocheur. “The creative process remains empirical, stemming from a blend of expertise and creativity.”

Thanks to his or her constant quest for innovation, Vacheron Constantin’s guilloché artisan has revolutionised tradition by inventing “figurative guilloché“. This unique craft process, carried out on traditional machines, replaces the tracing of lines with the application of micrometric dots, allowing for an infinite variety of designs.

The designs created by this guilloché work radiate incomparable strength and vibrancy. This technique has worked wonders on several of the Maison’s exceptional creations, notably with the Métiers d’Art series, where the exceptional mastery of guilloché work is perfectly combined with different enamelling techniques. This is particularly true of the two Métiers d’Art Florilège series inspired by the illustrations in the famous book The Temple of Flora published in 1799 by the English botanist Robert John Thornton. The master guillocheur began by tracing the outlines of the plant-life elements on the gold dial plate and then guilloché-engraved the flowers, reproducing the volume and vivacity of each petal. Depending on the model, between 45 and 73 areas require decoration before being further enhanced by Grand Feu cloisonné enamelling requiring several firings in the kiln.

At Vacheron Constantin, traditional know-how is also synonymous with innovation. This constant is a strong marker of the Maison. “Avant-garde guilloché consists in creating non-constant, random shapes like the contours of a non-geometrical design, such as the outline of the body of a dragon, a lion or a crested crane”, explains Vacheron Constantin’s master guillocheur. The same dexterity combining various guilloché techniques and artistic crafts can be found in the Métiers d’Art – Les Univers Infinis Angel watch and its dial populated by angels and demons facing each other in contrasting shapes and colours inspired by the artist M.C. Escher. On a white gold base, the engraver first draws the outline of the figures and then hollows them out as cells using the champlevé technique. In a second step, he defines the details of the demons using fine line engraving before the enameller fills the cavities thus hollowed out with angels and demons, by means of successive firings in the kiln. The guilloché artist then moves into action to craft the enamel coating the angels’ robes and wings.

A decorative technique in watchmaking applied mainly to the dial and case, as well as to certain movement components such as the oscillating weight, guilloché work is one of the most subtle finishes in watchmaking due to the play of light and shadow it creates. It is composed of criss-crossed or interwoven lines or curves, created by a guilloché machine consisting of a crank and a burin. The pattern of grooves that are a three to four hundredths of a millimetre deep serves to create an infinite number of motifs: Clous de Paris hobnailing, barleycorn, sunburst, basket weave. It can even mimic fabrics typical of the classic masculine wardrobe as in the Métiers d’Art Élégance Sartoriale series, which features stunningly original dials adorned with herringbone, Prince of Wales check, tartan, windowpane or pinstripe patterns.

Tapisserie – This technique consists of creating repetitive motifs comparable to those of a tapestry work. It is based on a pattern (matrix or model) reproducing the desired design, like the dials in the Égérie collection, of which the centre and perimeter feature a pleated pattern reminiscent of an Haute Couture fabric. The matrix, also known as the “origin” – formerly made of bronze or even vinyl and now from hardened steel – guides the burin of a tapisserie lathe. This mechanical engraving action, subtly orchestrated by the gesture of the master engraver, serves to create a perfect decoration, sometimes entrusted to the expert hands of the enameller.

This 1780 gold pocket watch is the oldest in Vacheron Constantin’s private collection to feature guilloché work on the dial and case. Although Abraham-Louis Breguet was a pioneer in the world of guilloché dials for pocket watches, Vacheron Constantin was quick to follow in his footsteps, as can be seen in this piece with its radiating guilloché dial bearing enamel Roman numerals and adorned in its centre with a champlevé floral bouquet. This ornamentation corresponds perfectly to the Louis XVI style of the period, which is distinguished by its minimalist geometric compositions of bucolic inspiration with fruits, leaves and flowers, often embellished with musical instruments. The aesthetic sophistication is accompanied by nicely balanced shapes and proportions, accentuated here by the relief engraving technique known as pounced ornament adorning the caseband along with the fine barleycorn guilloché pattern on the caseback.

A new generation of complications dedicated to beauty appeared at the beginning of the 1990s with models featuring jumping hours and retrograde minutes. This subtle display of jumping hours had been perfectly mastered by Vacheron Constantin in the world of pocket watches since the beginning of the 19th century, while exceptional pieces featuring retrograde displays attracted growing interest since the early 20th century. Appearing on pocket watches with elaborate, guilloché, painted or enamelled dials, these two complications were initially designed by watchmakers to offer a new way of telling the time. With the launch of the Saltarello in 1997, Vacheron Constantin revived this highly original mechanical tradition, which is extremely rare in wristwatches and has since become a Vacheron Constantin signature. The retrograde motion of the hand is underlined by a magnificent hand-guilloché pink gold dial featuring a sunburst pattern radiating across the dial from the axis of the minutes hand. The subtle guilloché work is repeated on the gold oscillating weight, which can be admired through the cushion-shaped caseback with its stepped lugs.

The series named “Les Univers Infinis” is inspired by the technique of periodic filling of the plane, known as “tessellation”, dear to the Dutch artist Escher, by combining enamelling, gem-setting, engraving and guilloché, all of which are mastered by the Manufacture. The dial of the Dove watch thus features a flock of doves highlighted by prestigious expressions of Haute Horlogerie. The engraver begins by tracing the outline of the doves on a yellow gold dial base, and then hollows them out as cells using the champlevé technique to engrave the motif. The enameller then fills the cavities thus formed, which are themselves coated in the final firing with translucent or opalescent enamel, depending on the colour of the doves, so as to reveal the engraved motifs. Then comes the gemsetter’s turn to highlight one of the birds. Finally, the guilloché artist enters the scene to accentuate the depth effect on the dial. It is very rare for the guilloché work on an enamelled piece to be carried out in the final stage, due to the delicate nature of the work involved. The expert takes the necessary time to patiently incise the material, bringing life to the interlocking doves.

A unique piece, the Les Cabinotiers Tourbillon Jewellery – Sea Horse watch illustrates the sheer complexity and the complementary nature of Vacheron Constantin’s artistic crafts. To endow the dial with its full depth, the master artisans have combined guilloché work, engraving, enamelling and gemsetting. First, the yellow gold dial is outlined using the champlevé technique to draw the spaces for the guilloché and engraving in this aquatic scene enlivened by seahorses. Once the motif has been traced, the cells intended for enamelling are guilloché-worked and engraved, an operation requiring all the more care in that these surfaces are small and separate from one another. The dial is then coated with the first layer of transparent enamel before the patient work of cloisonné enamelling begins, punctuated by three to four firings in the kiln. To represent the eye of the sea horse, the master gemsetter then fixed the cabochon-cut sapphire in place using the bezel setting technique. The gemsetting continues on the bezel with baguette-cut sapphires in a subtle blue gradient. The result shows the full extent of this quest for excellence, in which deftly mastered touch is accompanied by meticulous attention to the smallest details.