The Master Gemsetter, artisan of light 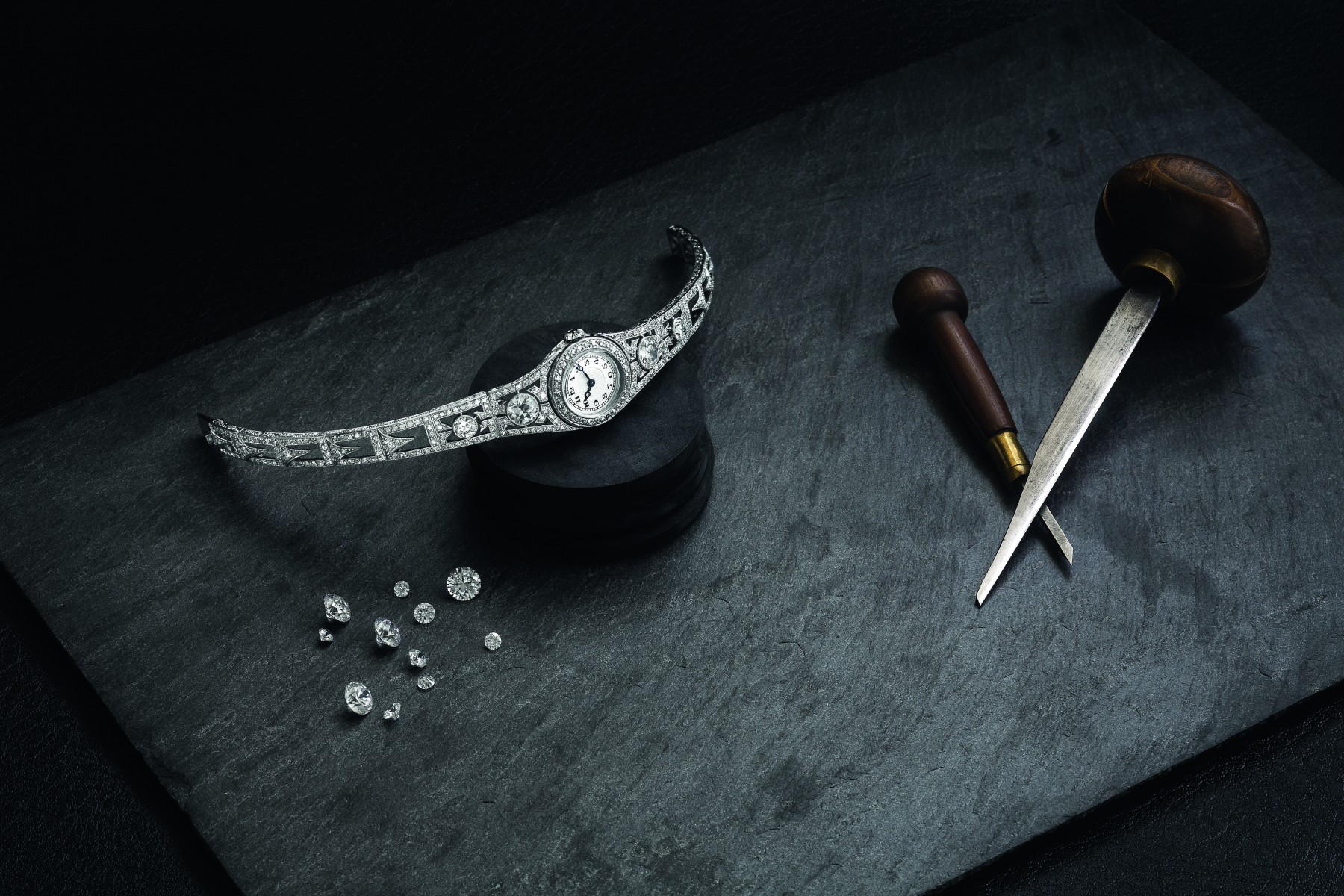 “Manual intelligence is not innate, it is constantly refined. Operations must be almost infinitely repeated, as such is the price to pay for the pursuit of excellence.” Vacheron Constantin’s Master Gemsetter is adamant that beauty takes time.

This quest for craftsmanship, which has characterised Vacheron Constantin since its foundation in 1755, is fully embodied in the art of gem-etting, which the Maison has mastered since the beginning of the 19th century; a period during which watches began to escape from waistcoat pockets to become authentic watchmaking jewellery, symbols of social status and new fashion accessories. Diamonds, rubies, sapphires, emeralds, pearls, onyx and garnets were used to highlight the curve of a bezel, to form the petals of a flower, associated with an enamel miniature or finely engraved decorations. Little by little, precious and hard stones were no longer content to underline a contour, instead constituting the decoration itself. In this field, Vacheron Constantin’s specificity lies in its ability to combine the various artistic crafts: gemsetters work in concert with the engravers, guillocheurs and enamellers. These exchanges give rise to masterpieces such as the Métiers d’Art Fabuleux Ornements collection, combining multiple skills: gem-setting, engraving, glyptics and enamelling.

“Each gemsetter has their own touch, like an invisible signature.”

The art of gemsetting radiates a unique, radiant, almost supernatural emotion. The in-depth knowledge of this ancestral craft is highly complex and requires a wealth of patience to master the many techniques (prong, bezel, snow, bead, pavé or invisible setting, also known as mystery setting) depending on the desired styles and light effects.

“Each gemsetter has their own touch”, says the Vacheron Constantin master setter. “It’s like an invisible signature. A trained eye can also differentiate between the techniques of each artisan.” At Vacheron Constantin, the artisanal gestures and tools have been passed down through the generations and appear immutable. Scorpers, beading tools, spitsticks, pushers … the Vacheron Constantin master gemsetter makes her own tools, just as her predecessors did, using a blend of creativity, dexterity and devotion. “Every day, I set myself a challenge, to try to do better than the day before and even better than the day before”, she explains. “I prepare myself physically and psychologically just as an athlete would do for a competition, yet without falling into the trap of aiming for speed. Once my eyes are glued to the binocular microscope, the notion of time vanishes completely. You have to have the dexterity but also a keen eye, to seek artistic harmony.”

“Once my eyes are glued to the binocular microscope, the notion of time vanishes completely. You have to have the dexterity but also a keen eye, to seek artistic harmony.”

Stylistic research has always been omnipresent in Vacheron Constantin’s jewellery watches. It is a sign of the prolific creativity that is often a step ahead of trends. During the Art Deco period, for example, the Maison demonstrated uncommon daring through jewellery watches featuring atypical, imaginative and sometimes playful designs. “When I prepare a snow setting, I feel like I’m going back to my childhood days; I prepare my canvas with tiny coloured paper dots”, explains the Vacheron Constantin master gemsetter. “I then play with the different diameters of stone.”

In the workshops of the Maison, all the artisans work in teams and enjoy a rare freedom of expression. “We are constantly sharing ideas between guillocheurs, enamellers, engravers, gemsetters and watchmakers, which is a fabulous opportunity.” This tremendous freedom goes hand in hand with creativity, which is a real asset within the Manufacture in terms of the strength of its proposals and its daring. In 2009, to celebrate the 30th anniversary of the Kallista, Vacheron Constantin presented the Kallania watch, setting a new world record with its 186 diamonds totalling 170 carats. One year later, the Maison innovated again with the Métiers d’Art Lady Kalla Flamme watch, which revealed a new diamond cut: the flame cut.

“When I prepare a snow setting, I feel like I’m going back to my childhood days; I prepare my canvas with tiny coloured paper dots.”

A gemsetter can neither glue nor weld precious stones into metal. Their art consists of drilling a ‘seat’ in the base, which is then adjusted to the stone, which is secured in place by pushing back the metal. There are several gemsetting techniques and they are used according to the desired aesthetic effect.

This technique encloses the stone in thin, folded metal rods taking the form of two to eight prongs of various lengths, featuring round, herringbone or pointed ends. On some models, the gem is mounted in a sort of cage or “chaton”. This prong-setting technique, which is more suited to jewellery than watches, can nevertheless be found in the Vacheron Constantin private collection, notably in inventory References 10353 from 1948 and 11446 from 1964.

This is one of the oldest and most robust setting methods, used on the Les Cabinotiers Minute Repeater Minutes Tourbillon sky chart – Leo Jewellery timepiece. It consists of encircling the perimeter of the stone with a strip of metal, the upper part of which is pushed back so as to slightly cover the edge. If the metal does not surround the entire gem, it is referred to as semi-bezel setting.

Rail setting – This type of setting, notably illustrated by the dial of the Traditionnelle Tourbillon jewellery watch, consists of setting the stones side by side between two metal rails. The stones can be round, oval or square-shaped, or baguette-cut.

Bead or pavé setting – This technique is especially suitable for small stones of the same size. The craftsman creates a paving by inserting the gems into holes hollowed out from the metal base and then holding them in place with tiny metal beads. This technique is ideal for setting the bezel, such as the King Kalla bezel with its 192 diamonds.

Snow setting – The diamonds are positioned randomly, playing on their different diameters to cover the entire base. The Traditionnelle moon phase watch is lit up by this type of setting on the dial: 548 brilliant-cut diamonds – of ten different diameters ranging from 0.7 to 1.5 mm – are randomly placed to obtain a striking effect, as if melted into the light. This type of setting requires the most rigorous discipline in selecting the stones, which must be set to the nearest micron.

Invisible or mystery setting ™ – Double-patented in the 1930s, this technique enables gemstones to be set without any visible prongs or metal.  The stones are cut with a groove at their base so that they can be slid into a rail with no space between them. The result is a surface entirely covered with gems that appear to remain in place without any means of securing them, such as the Malte Regulator tourbillon high jewellery invisible-setting watch entirely paved with 565 baguette-cut diamonds

This ladies’ watch from 1812 is the oldest gemset timepiece in Vacheron Constantin’s private collection. In the 19th century, as part of consistent efforts to endow its timepieces with ornamentation as accomplished as its watchmaking mechanisms, the Maison used precious and semi-precious stones or even half-pearls. This setting also serves to magnify the finely chased and recessed motif and “mille-feuilles” engraving on the back, or the guilloché work on the gold dial.

In 1979, in response to a special order, Vacheron Constantin created the Kallista (“the most beautiful” in Greek) watch, a one-off model based on a project by artist Raymond Moretti. Carved from a gold ingot and set with 118 emerald-cut diamonds totalling 130 carats, this was the most expensive wristwatch ever produced. Dedicated to the couple who commissioned it, the Kallista watch features a diamond-paved caseback bearing a gold applique featuring a male and female profile.

In 2009, to celebrate the 30th anniversary of the legendary Kallista, Vacheron Constantin presented the Kallania watch, setting a new world record with its 186 diamonds totalling 170 carats. This piece was followed a year later by the Métiers d’Art Lady Kalla Flame watch, which unveiled a new diamond cut – the flame cut – exclusive to Vacheron Constantin in the world of jewellery and bearing official homologation from the Gemological Institute of America, which had not approved a new cut for 20 years.

The pink gold case of this timepiece features an engraved decoration of vine leaves interspersed with ruby grapes. The work of the engraver is combined with that of the gemsetter on the outside of the case to give life to figurative motifs. The two master artisans took turns, with the gemsetter receiving the case from the engraver and returning it to him for the final finishing touches, a progressive tandem operation.