TAG HEUER REIMAGINES THE LEGENDARY
“DARK LORD” FOR ONLY WATCH 2021 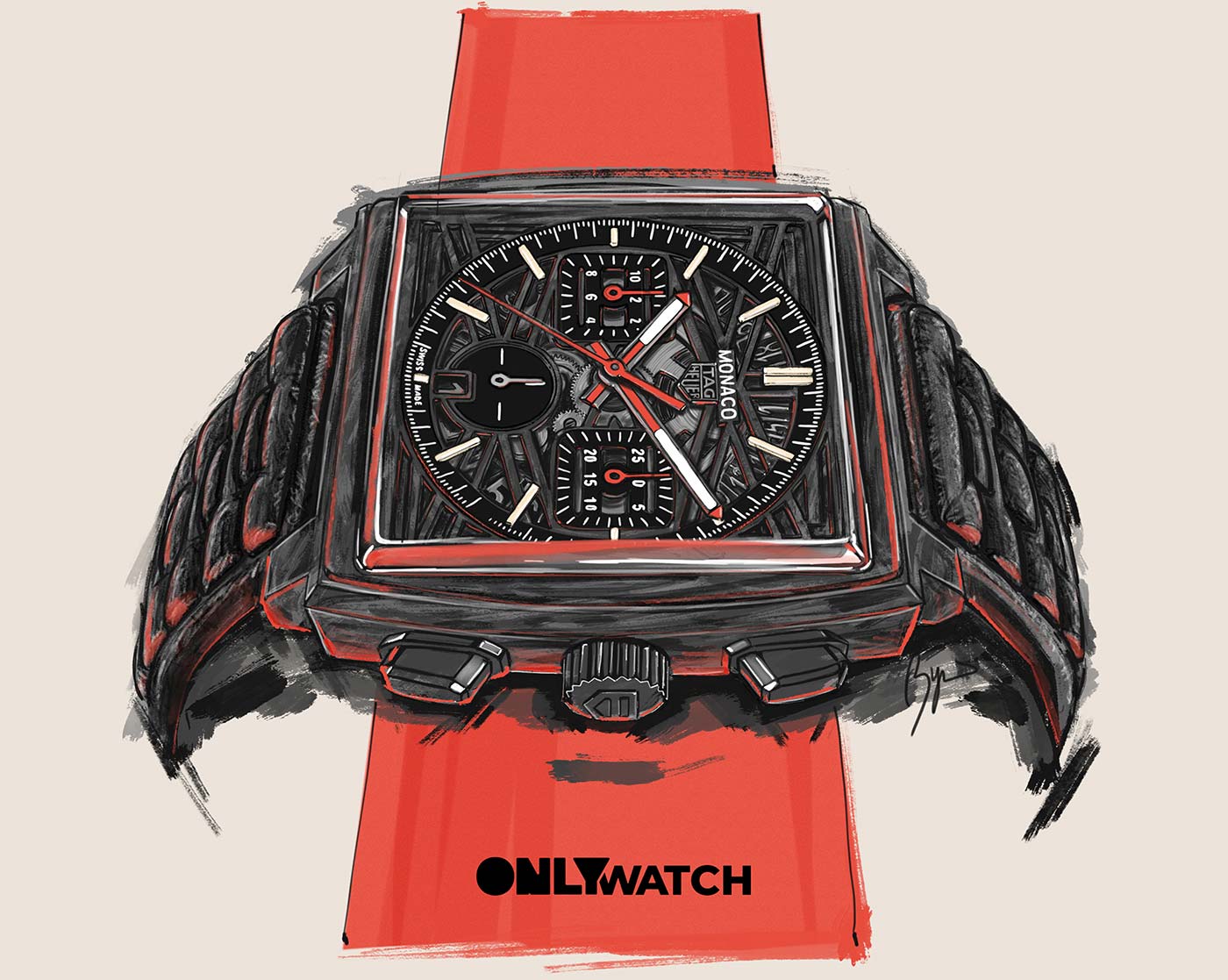 La Chaux-de-Fonds, Switzerland 1st July 2021 : TAG Heuer is delighted to announce its return to Only Watch with the TAG Heuer Only Watch Carbon Monaco, a one-off, high-end, hand-finished version of the Swiss watch company’s iconic square-cased automatic chronograph that will never be recreated.

For the Only Watch 2021 auction, the Swiss watchmaker channels the spirit of the ultra-rare Monaco “Dark Lord” with a one-off, high-end, carbon-cased version of its inimitable square-cased chronograph.

The unique watch will be auctioned at Only Watch 2021, the biennial charity watch auction, which is scheduled to take place this year in Geneva on 6 November.

“Only Watch has become one of the highlights of the watchmaking calendar, and we are so glad to be taking part again and to help raise vital funds for research into Duchenne muscular dystrophy,” said Frédéric Arnault, TAG Heuer Chief Executive Officer. “It’s also our great pleasure to put forward for auction the TAG Heuer Only Watch Carbon Monaco, one of the most spectacular, imaginative wristwatches we have ever created.”

The carbon-cased piece is a true watchmaking tour de force, playing on more than half a century of TAG Heuer heritage, while also embracing the best of the company’s 21st century savoir faire and innovation. The result is a very special watch that’s both a fond nod to the past and a symbol of TAG Heuer’s insatiable appetite for avant-garde Swiss watchmaking.

ONLY WATCH: IF THERE WAS ONLY ONE 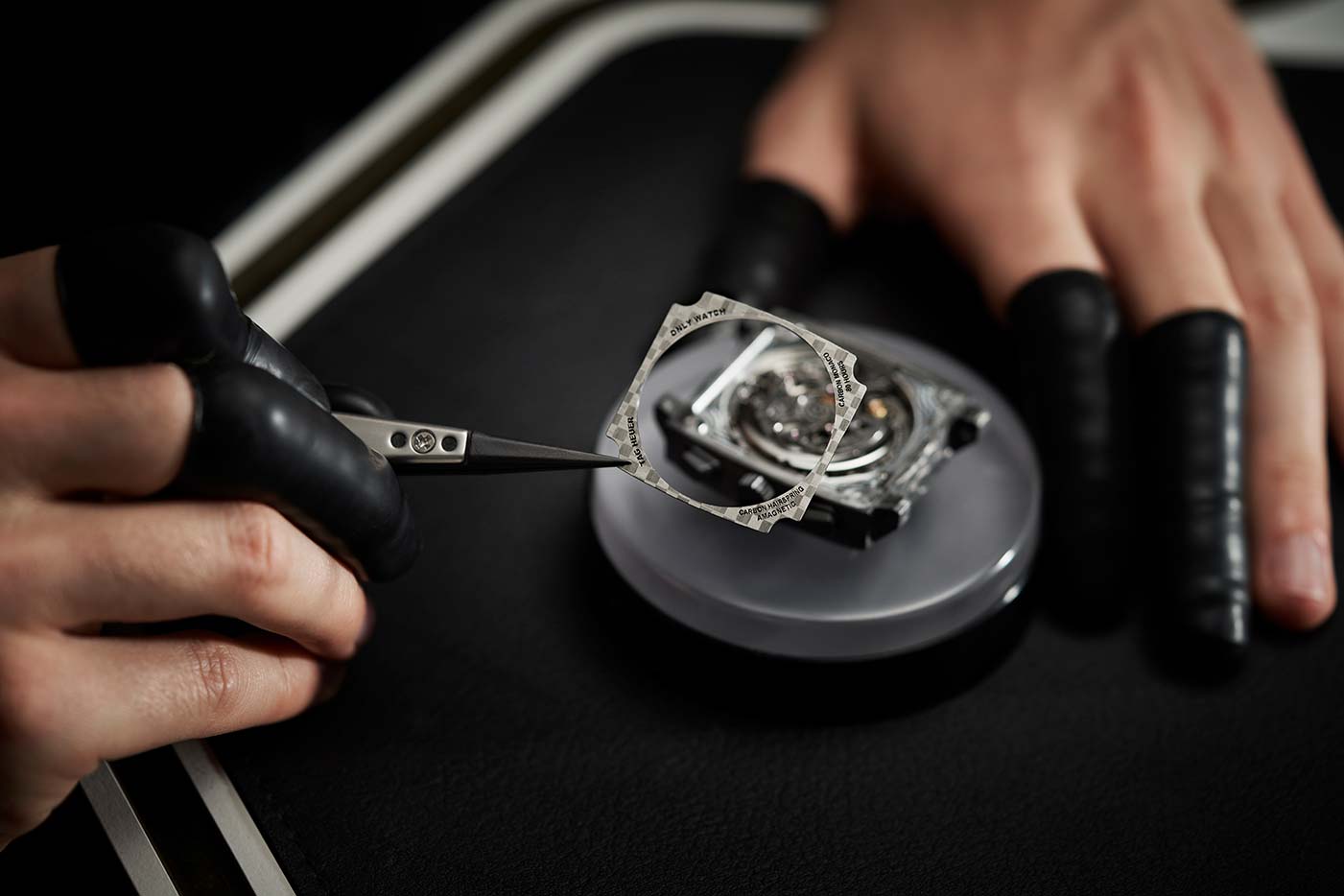 Only Watch was founded by Luc Pettavino and first held in 2005. The event, which is under the high patronage of H.S.H. Prince Albert II of Monaco, is now entering its ninth edition. It continues to unite the world’s finest watch companies, which donate spectacular one-off watches to the auction. To date, Only Watch has raised more than 70 million euros in support of research projects into Duchenne muscular dystrophy, with 99 per cent of proceeds going directly towards funding those projects.

“We wanted to support this magnificent initiative with a unique, memorable watch that celebrated a legend from our past, but that also showcased our passion for fine watchmaking, innovation, aesthetics and avant-garde design,” continued Mr Arnault. “The TAG Heuer Only Watch Carbon Monaco is that watch.”

For TAG Heuer aficionados, the Only Watch Carbon Monaco will have clear echoes of the mythical black-PVD-cased Monaco Reference 74033N known by collectors as the “Dark Lord”. It was produced in limited quantities in the mid-1970s and never appeared in a Heuer (as the company was called until 1985) catalogue or any of the company’s advertising. Today, it is extremely rare and highly prized.

TAG Heuer has used carbon fibre for the Monaco case before with the 2018 Monaco Bamford, but this is a unique case that was designed explicitly to carry the largest sapphire crystal caseback ever applied to a Monaco. TAG Heuer’s engineers wanted to give the watch’s future owner an unimpeded view into its bespoke movement, while ensuring the watch remained water-resistant.

THE DIAL: OPEN ALL HOURS

The striking skeletonised dial that gives the watch so much of its character is also carbon. It was created in collaboration with TAG Heuer’s long-time partner, the highly regarded dial specialists ArteCad, and is worked from a single piece of carbon fibre.

The dial’s architectural look was created by milling and drilling the basic form to reveal striking structural shapes that stretch across the face of the watch like the struts on a racing car, a design that makes subtle reference to TAG Heuer’s integral role in the evolution of modern motor sport over more than six decades.

It’s here that we see the first example of the handcraftsmanship involved in creating this watch. Each of the dial’s intricate skeletonised facets has been finished by hand using the fine-watchmaking technique
of anglage, which gives the dial its depth and multidimensional look.

Underneath these, a date wheel peeks through, as does the top side of the movement. Typically, the top side of a calibre is left raw as it’s unseen, hidden by a solid dial. But in this case, TAG Heuer elected to hand-finish it to ensure every element was as exceptional as it could be, even when partially obscured, a decision that’s symbolic of the relentless attention to detail applied to the watch. Sitting on top of the carbon dial are three black galvanised brass plates that form the watch’s chronograph and small-seconds subdials. Orange detailing sampled from Only Watch’s 2021 sun-kissed colour palette makes the hands stand out against the black dial, while the hour markers are individually machined blocks of highly luminescent beige Super-LumiNova®.

THE MOVEMENT: FINISHING IN STYLE 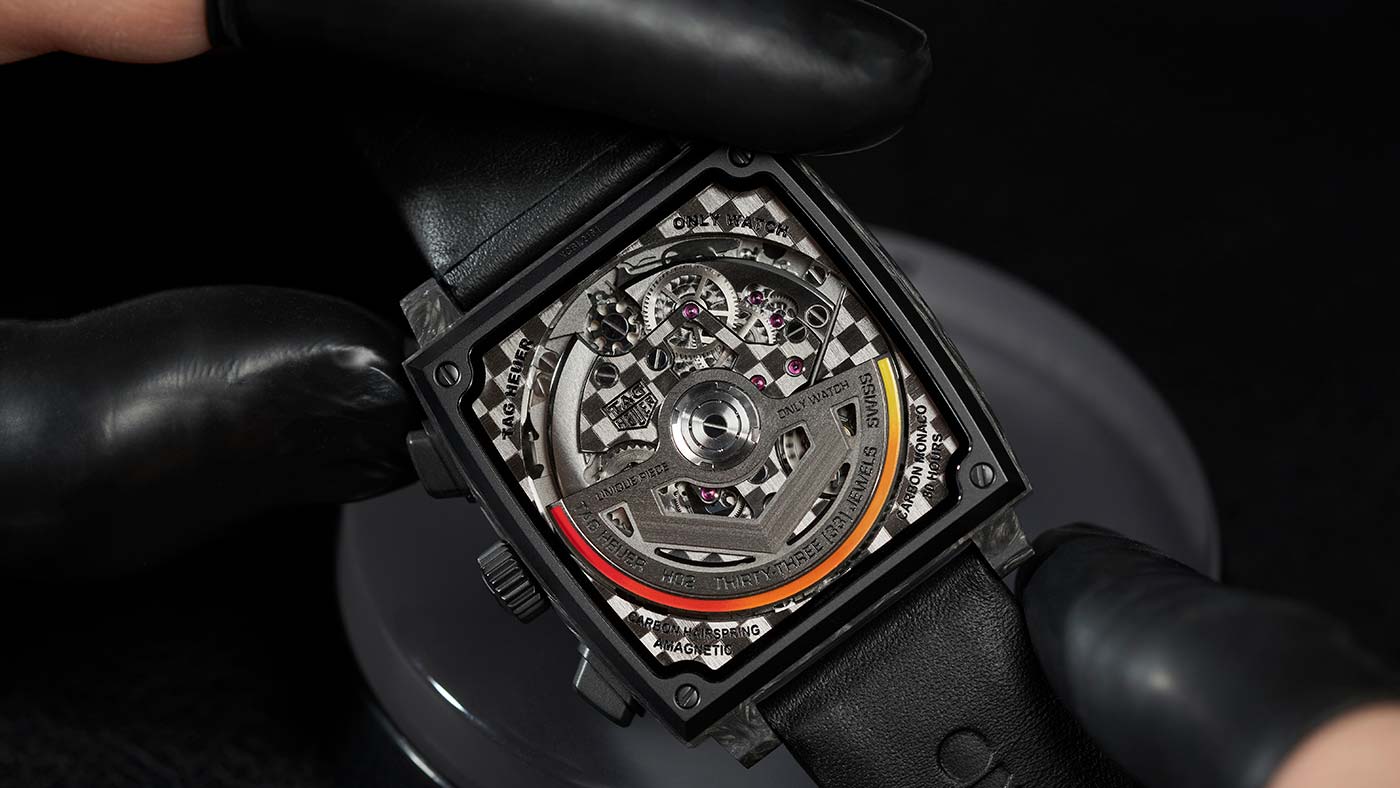 This, however, is a unique expression of the Heuer 02, created exclusively for the occasion. Not only has the movement been beautifully decorated by hand, it also carries TAG Heuer’s groundbreaking inhouse carbon hairspring, developed by the company’s celebrated TAG Heuer Institute. Appearing in the Heuer 02, and therefore a a Monaco for the very first time, the carbon hairspring delivers exceptional levels of anti-magnetism, shock resistance, stability across temperature ranges and refined geometry for excellent chronometric performance.

The movement also features a unique oscillating weight in the form of the TAG Heuer shield, which is not only hand finished throughout, but is also decorated with a fine line in the gradient orange to yellow colour of Only Watch 2021. Astonishingly, the seamless transition from orange to yellow was achieved by hand, painted by the master dial artist and micro-painter André Martinez. André is based in Le Locle, only a few kilometres from TAG Heuer’s headquarters in the Swiss watchmaking town of La Chaux-de-Fonds.

But the movement’s story doesn’t end there. To match the spirit of Only Watch, TAG Heuer decided to give the movement an exceptional level of finishing and to work with Artime SA, one of the watch industry’s leaders in decorative techniques. This continued the watch’s bespoke story and demonstrated the company’s ongoing commitment to traditional watchmaking savoir faire.

There are no fewer than 10 types of hand finishing. The most visible is the rare graté decoration. Applied by hand, this creates the chequered-flag motif seen on the movement’s bridges and its surround, which carries further special engravings. To create an additional sense of depth, the movement also features further hand finished techniques including anglage, black polishing, circular graining, straight graining, perlage, snailing, sandblasting, chevron engraving and sunburst finishing.

It took 25 hours of additional hand-finishing to create this spectacular effect, producing a finewatchmaking story worthy of Only Watch.

THE STRAP: (NOT) IN THE METAL 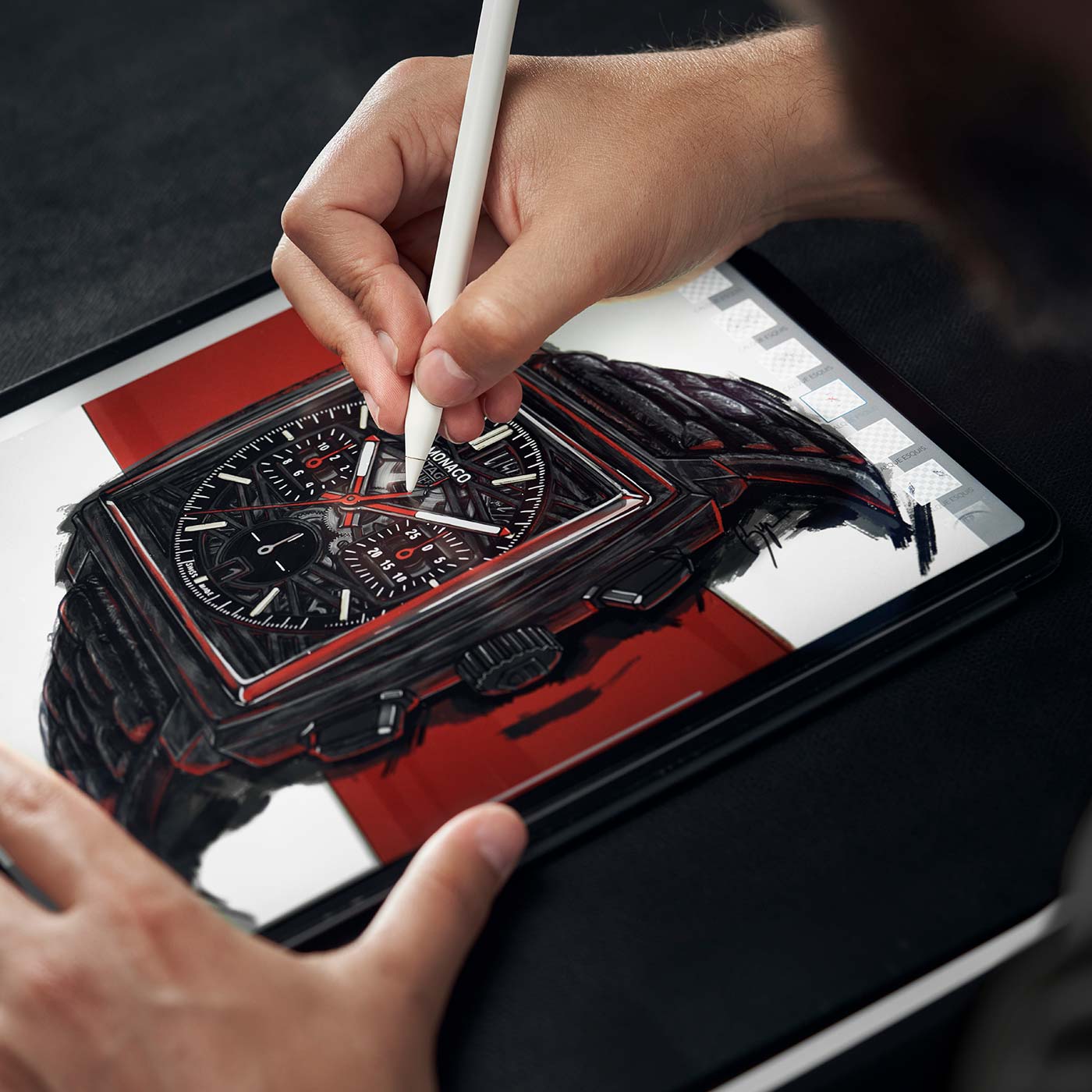 To finish off this spellbinding watch, TAG Heuer has created a novel strap that looks like a metal bracelet, but which is in fact made of leather. The link effect is produced using a highly skilled process that took months to perfect. First, silicon is injected into the sole of the leather. This is then heat-stamped with a mould in the shape of a metal link bracelet, creating the threedimensional effect. TAG Heuer has never used this technique on a watch strap before.

UNDER THE HAMMER:
A STORY FIT FOR ONLY WATCH

The TAG Heuer Only Watch Carbon Monaco arrives after months of development. TAG Heuer’s designers, engineers and partners have poured their hearts and souls into it, creating a truly outstanding wristwatch that brings together more than five decades of watchmaking heritage, fine-watchmaking traditions passed down through the generations and the most advanced contemporary watchmaking techniques available today.

“My profound congratulations to the team for producing a watch that pushes TAG Heuer watchmaking beyond the edge,” said Mr Arnault. “And my very best wishes to H.S.H. Prince Albert II of Monaco, Luc Pettavino, Christie’s and the Only Watch team ahead of this year’s auction. We’ll see you in Geneva.” 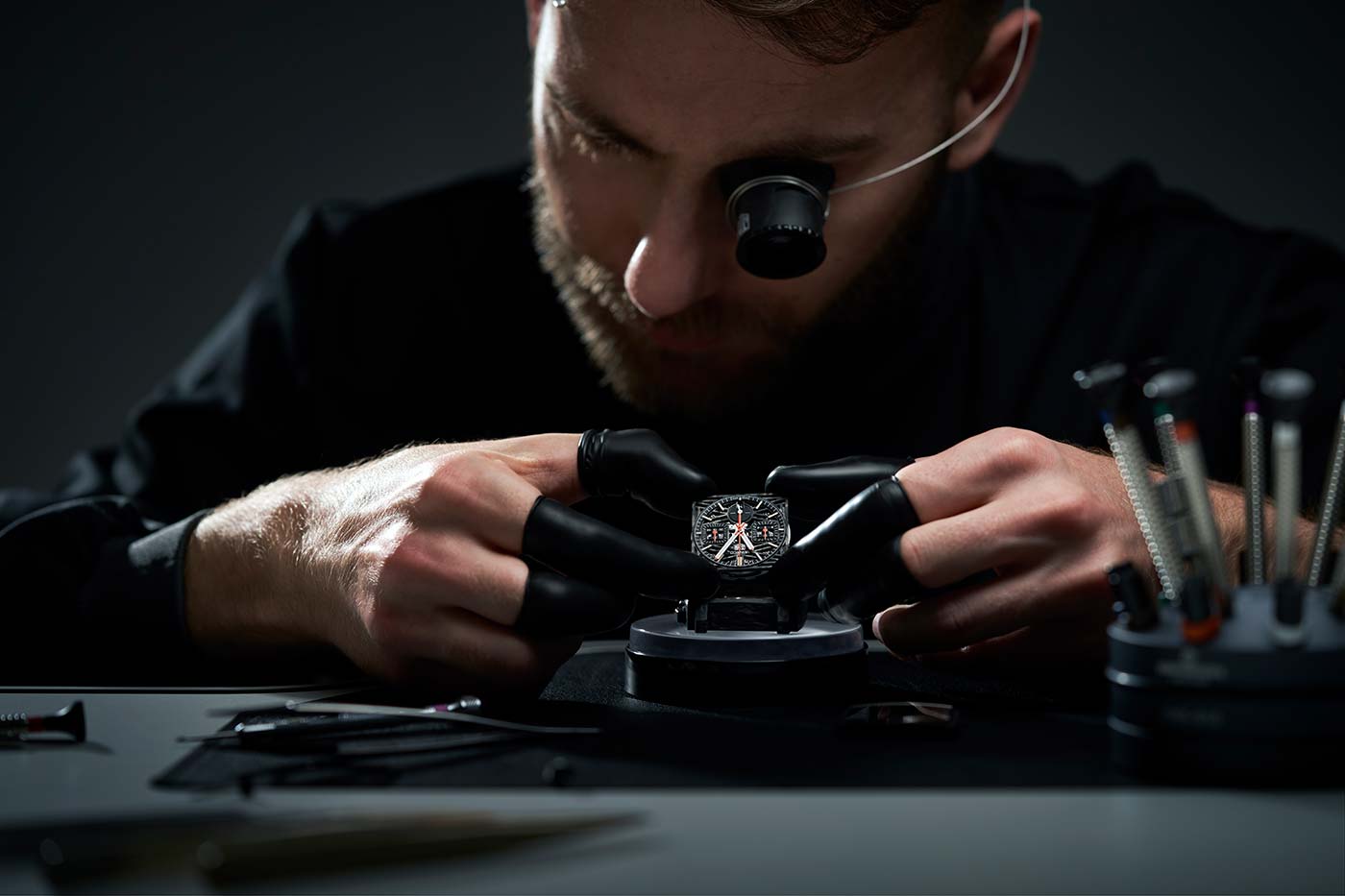 TAG Heuer, founded in 1860 by Edouard Heuer in the Jura Mountains of Switzerland, is a luxury watch brand that is part of LVMH Moët Hennessey Louis Vuitton SE (“LVMH”), the world’s leading luxury group. Based in La Chaux-de-Fonds, Switzerland and with four production sites, TAG Heuer has 1470 employees and is active in 139 countries. TAG Heuer products are available online on www.tagheuer. com for select countries and in 160 boutiques and 3,000 points of sale worldwide. The company is headed up by Frédéric Arnault, CEO of TAG Heuer.

For 160 years, TAG Heuer has demonstrated pure avant-garde watchmaking spirit and a commitment to innovation with revolutionary technologies that have included the oscillating pinion for mechanical stopwatches in 1887, the Mikrograph in 1916, the first automatic-winding chronograph movement – Calibre 11 – in 1969 and the first luxury smartwatch in 2015. Today, the brand’s core collection consists of three iconic families designed by Jack Heuer – TAG Heuer Carrera, Monaco and Autavia – and is rounded out with the contemporary Link, Aquaracer, Formula 1 and Connected lines.

Downloads:
All press material can be obtained free of charge at https://presscorner.tagheuer.com/directlogin