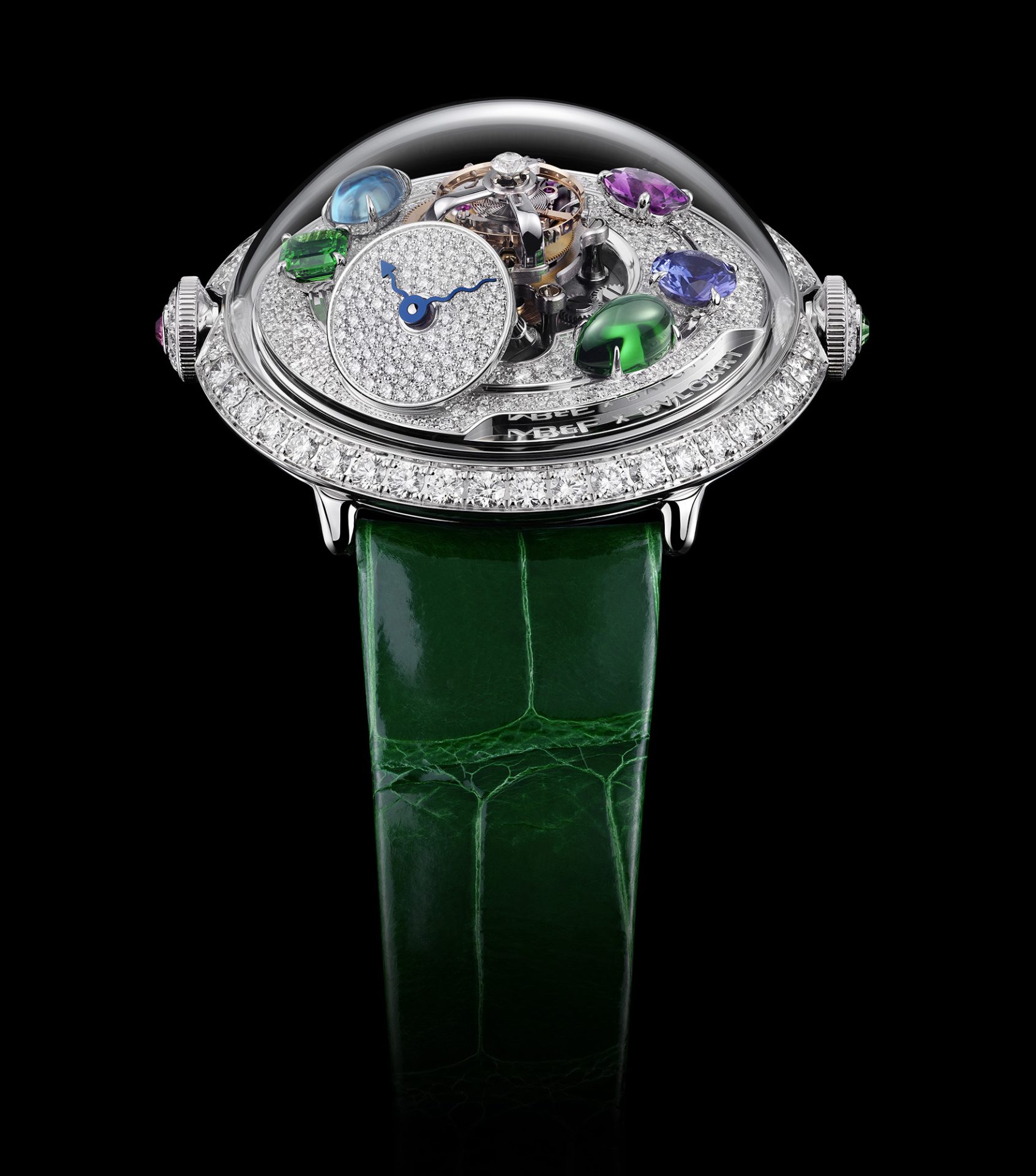 The story of the collaboration between Bulgari and MB&F is first and foremost that of an encounter – initially motivated by mutual professional respect and subsequently evolving into a strong friendship – between Bulgari’s Product Creation Executive Director, Fabrizio Buonamassa Stigliani; and MB&F’s Founder and Creative Director, Maximilian Büsser. The outcome is FlyingT Allegra, a joint and unexpected feminine creation merging various skills, but above all two mindsets. 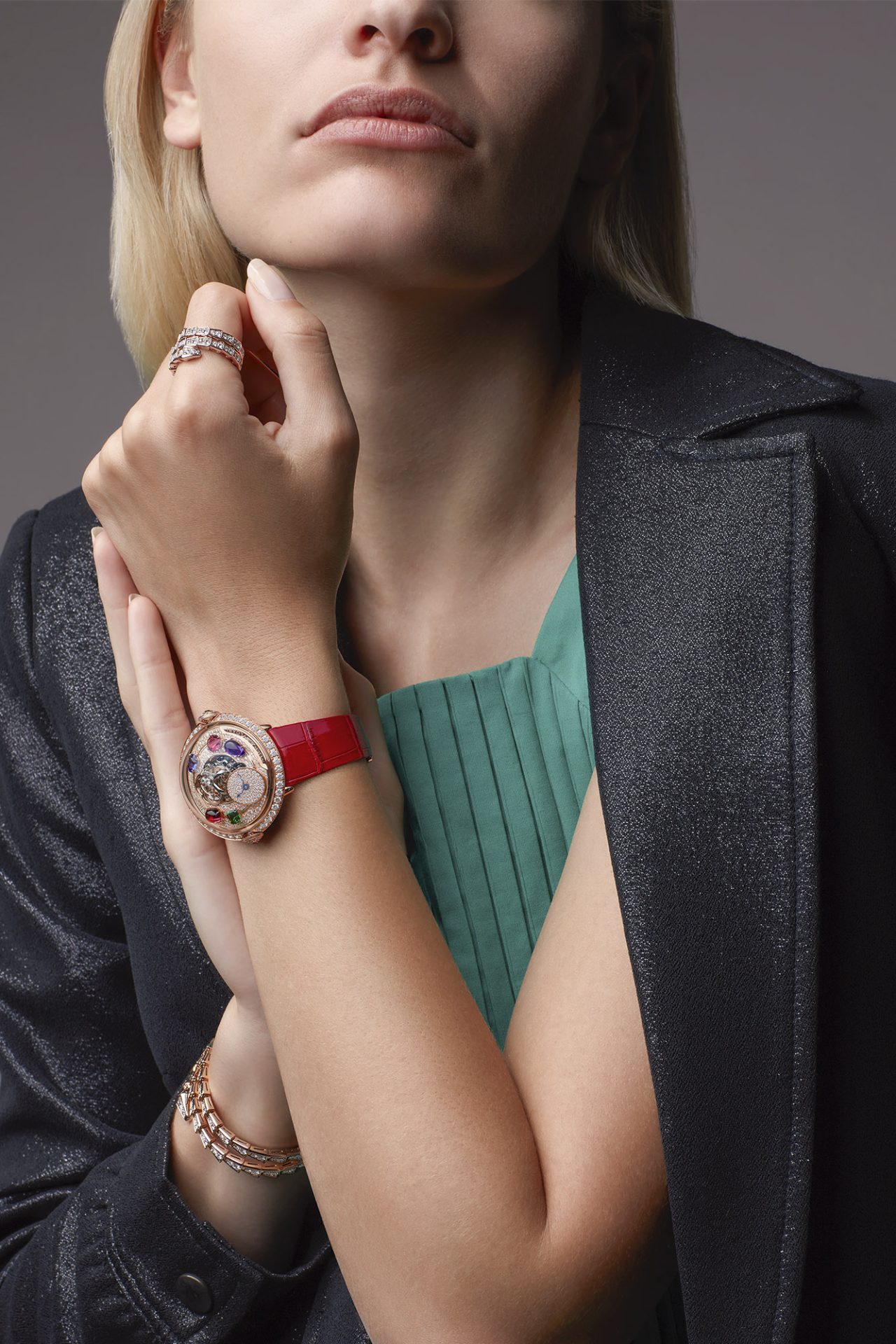 This story is also that of an unlikely connection, of two paradoxes combining to form a single, homogeneous and sophisticated whole. It is also the story of an encounter between two unusual and unconventional creative approaches. When MB&F and Bulgari decide to join forces, the result can only be extraordinary, in the truest sense of the word.

Both Bulgari and MB&F display strong character in their respective fields yet are also very different. The Rome-based Maison is known for its love of cabochon-cut coloured gems in jewellery watch creations, expressing Mediterranean warmth and exuberance – diametrically opposed to the currently prevailing classicism. Born in 2005, MB&F took the decision to design radical timepieces exploring previously uncharted conceptual territory within a watch industry environment characterised by stubborn conventionalism.

The two brands were thus bound to converge on a shared platform: that of their jewellery-making and mechanical audacity. MB&F works on volumes and complexity, while Bulgari creates two-dimensional models with a radically graphic aesthetic. The choice to revisit MB&F’s Legacy Machine FlyingT was thus both natural and logical, since FlyingT Allegra incorporates both sensibilities.

Radical in terms of its architecture and construction, while exquisitely precious in terms of its opulent ornamentation, this creation was intended as a tribute to femininity. In its name FlyingT, the T stands for the initial of Max Büsser’s wife, Tiffany, as well as for flying Tourbillon. In an ultimate refined touch embodying this sophisticated approach, the movement is designed in such a way that only its owner can read the time.

While this may seem simple, the reality is quite different. The movement is vertically built along a central axis orchestrating the overall architecture of the entirely visible mechanism. In this respect, the watch deliberately goes against tradition, since everything that is usually hidden is highlighted here in a three-dimensional construction. 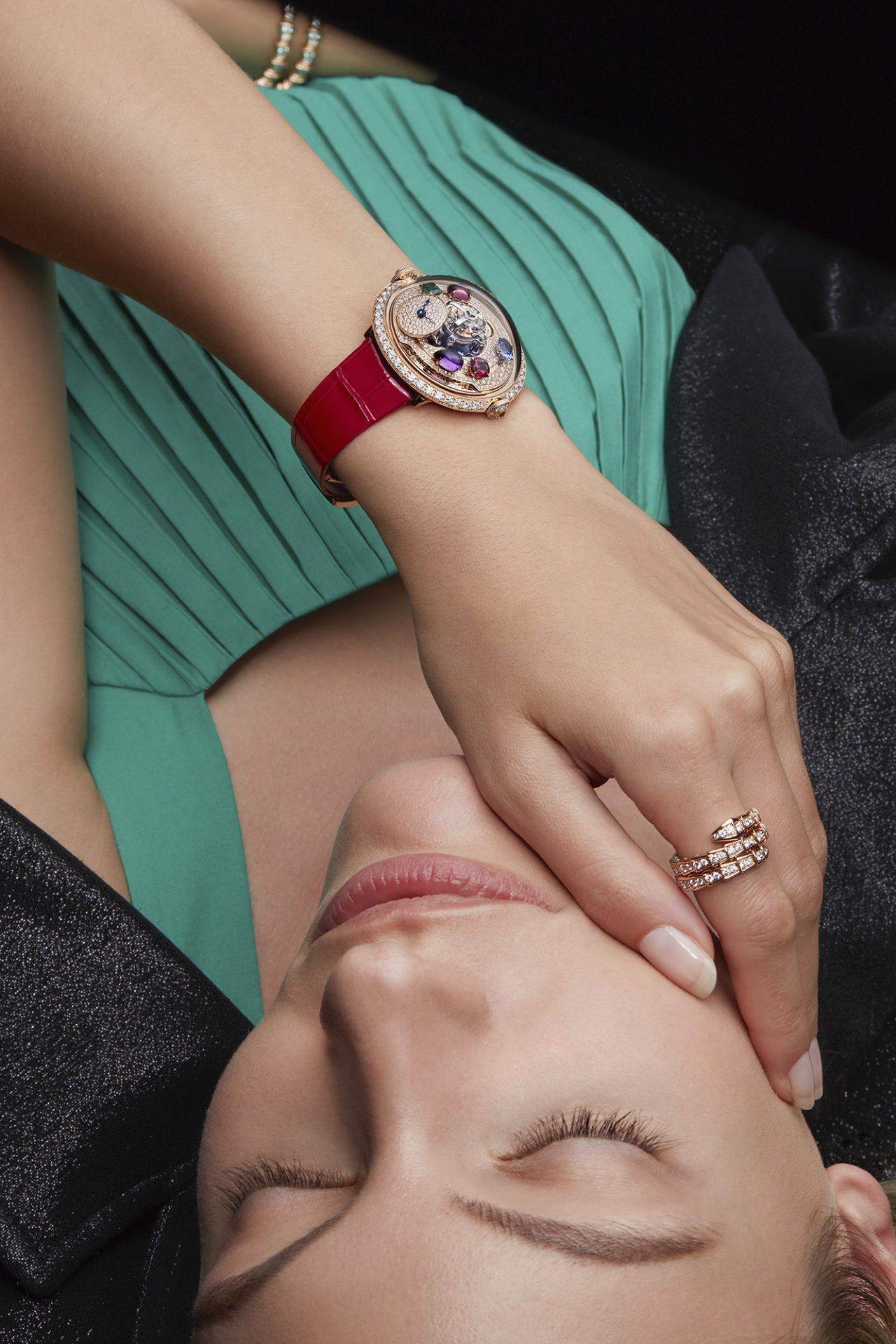 The upper end of the axis carries the diamond-set flying tourbillon and the balance, a vibrant technical organ against which the hours and minutes dial is set at a 50-degree angle, precisely defined so that the owner of the FlyingT Allegra is the only one who can read the time. The case-back reveals the sun-shaped oscillating weight: its gold sandblasted rays rotate on the ruthenium disc positioned above a platinum counterweight.

Between the regulating organ and the rotor, the barrel ensures an extremely generous 100-hour power reserve made possible by the reduction in the number of gears. A sapphire crystal dome tops this three-dimensional assembly, beneath which one can admire the organic life of the movement.

This unusual construction with its feminine-themed design could not have been more appropriate for Bulgari. The volumes of the watch – featuring a case entirely redesigned by Bulgari to give it a futuristic and opulent profile – are matched by those of the coloured stones. These gems serve to counterbalance the cold precision and micromechanical complexity of this model by instilling the Roman jeweller’s warm and exuberant signature touch. For each of the 20 timepieces composing the two pink or white limited editions, jewellers have carefully selected tourmaline, tsavorite, diamonds, rubellite, amethyst, tanzanite and topaz, in an exceptional composition forming a full circle around the movement. The dial entirely paved with snow-set diamonds provides a dazzling backdrop.

In contrast to conventional high jewellery codes, Bulgari has always favoured the use of coloured stones rather than diamonds alone. Coloured gems enable the Rome-based Maison to create authentic compositions through a gradual process aimed at achieving harmony and chromatic power adapted to the design of the model. Cut is very important, and Bulgari favours the cabochon which ensures extreme clarity of the stone while emphasising the opulence of the creation. The cabochon cut perfectly matches the FlyingT Allegra’s round and voluminous case.

This exceptional partnership goes far beyond the realm of the complicated feminine jewellery watch. It highlights two visions of the world, two interpretations of creativity that are radically different in form, yet which merge in substance within an integrated and harmonious co-creation vividly demonstrating the power of two.

ABOUT THE FLYING T ENGINE 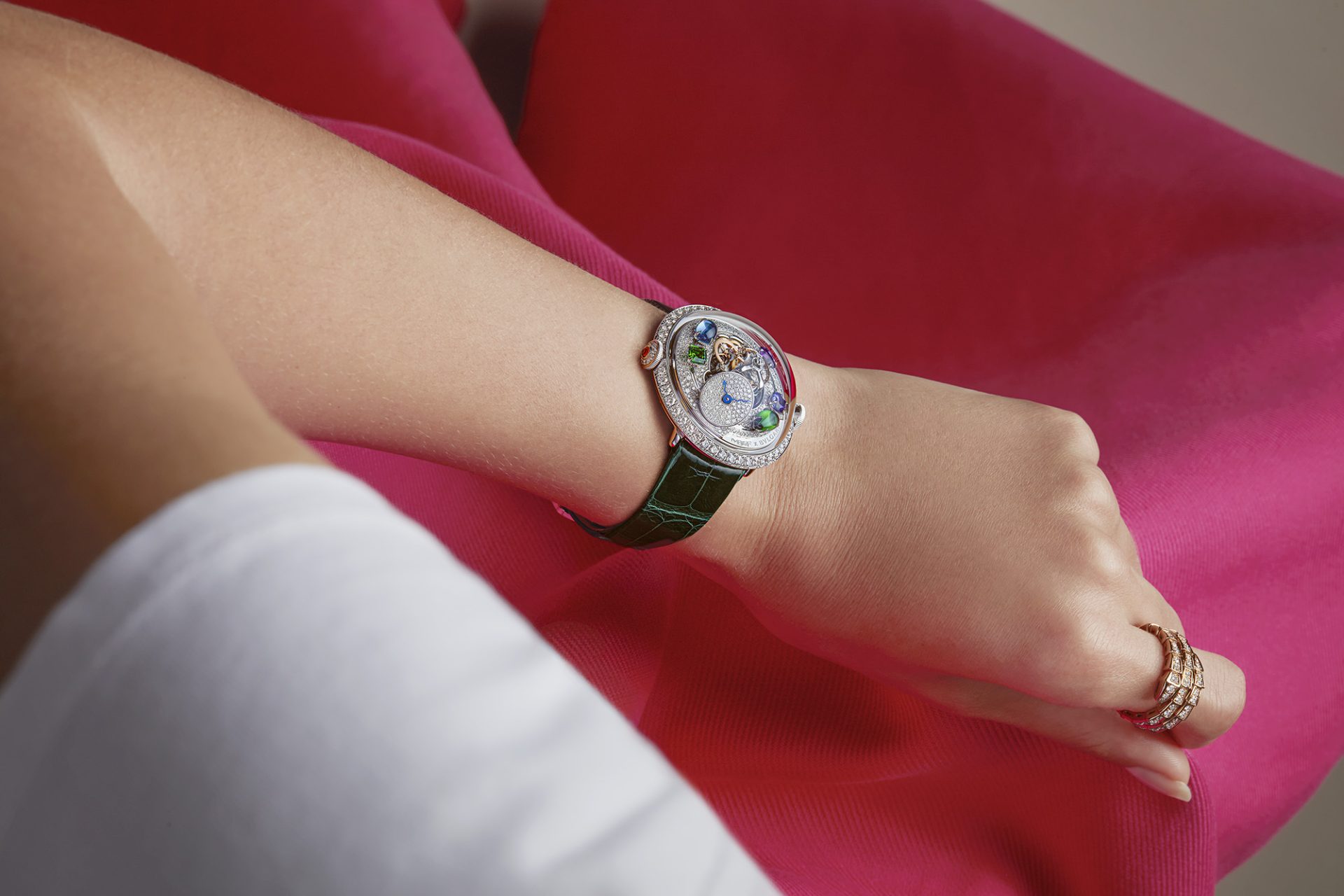 In a departure from most modern watch movements, which take a radial and co-planar approach to movement construction, the LM FlyingT engine utilises a vertical and co-axial approach. The cinematic flying tourbillon, which boldly projects beyond the dial-plate of LM FlyingT, is a visually stunning example of the rotating escapement and stands in stark contrast to other flying tourbillons, which usually do not venture past the confines of their surrounding watch dials.

Flying tourbillons, as their name suggests, are anchored only at their base, with no stabilising bridge to restrict lateral motion at the top. This increased need for overall rigidity is what causes the conservative placement of most flying tourbillons within their movements. Legacy Machine FlyingT breaks free of this limiting need for movement security and confidently displays its flying tourbillon in all its glory.

In order to display the time as precisely as possible on the 50° inclined dial, conical gears were employed to optimally transmit torque from one plane to another. The 280-component engine of Legacy Machine FlyingT has a power reserve of four days (100 hours), which is among the highest within MB&F. 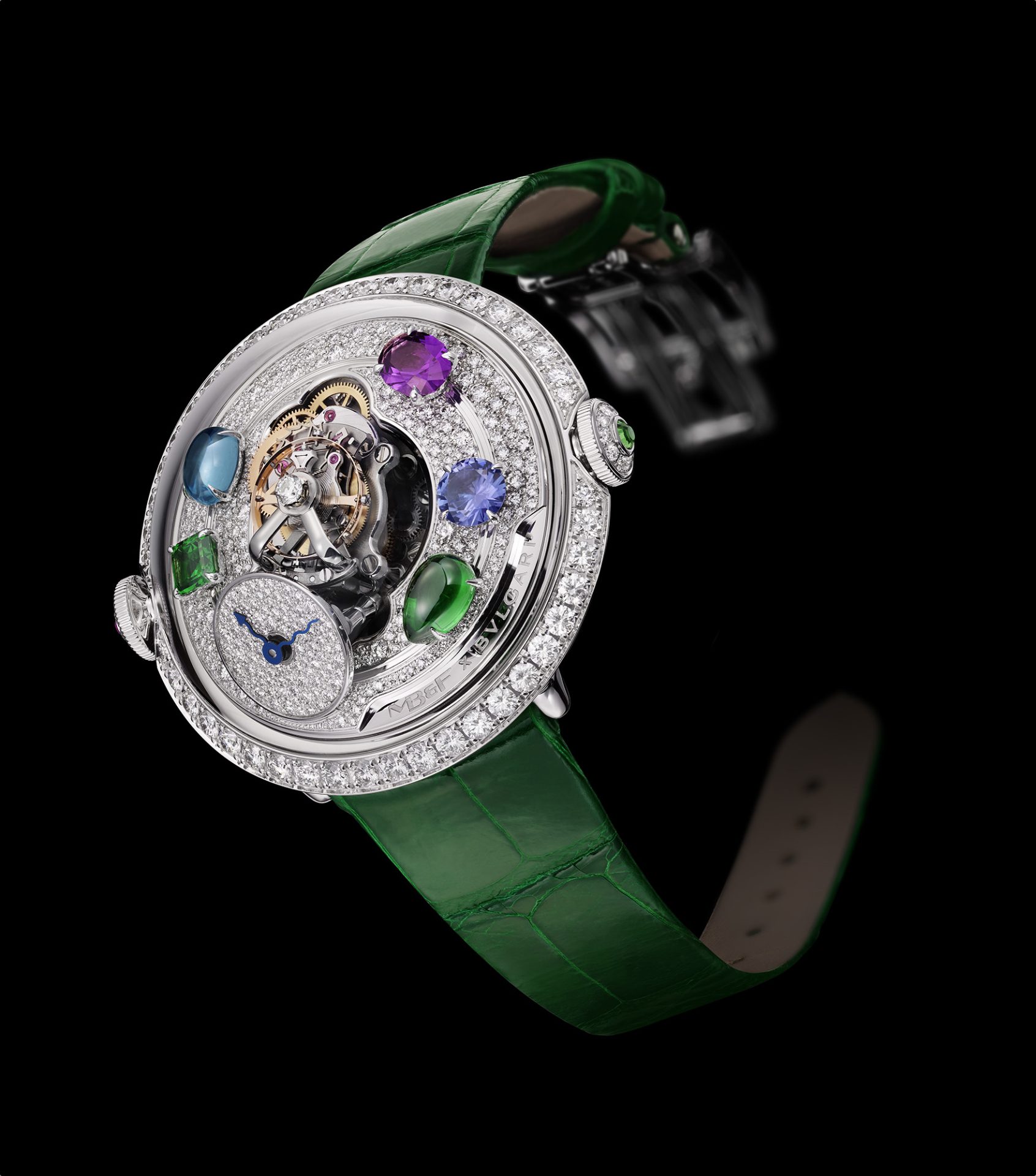 Hours and minutes displayed on a 50° vertically tilted dial with two serpentine hands.

Two crowns: winding on left and time-setting on right.

For the white gold version:

For the rose gold version: 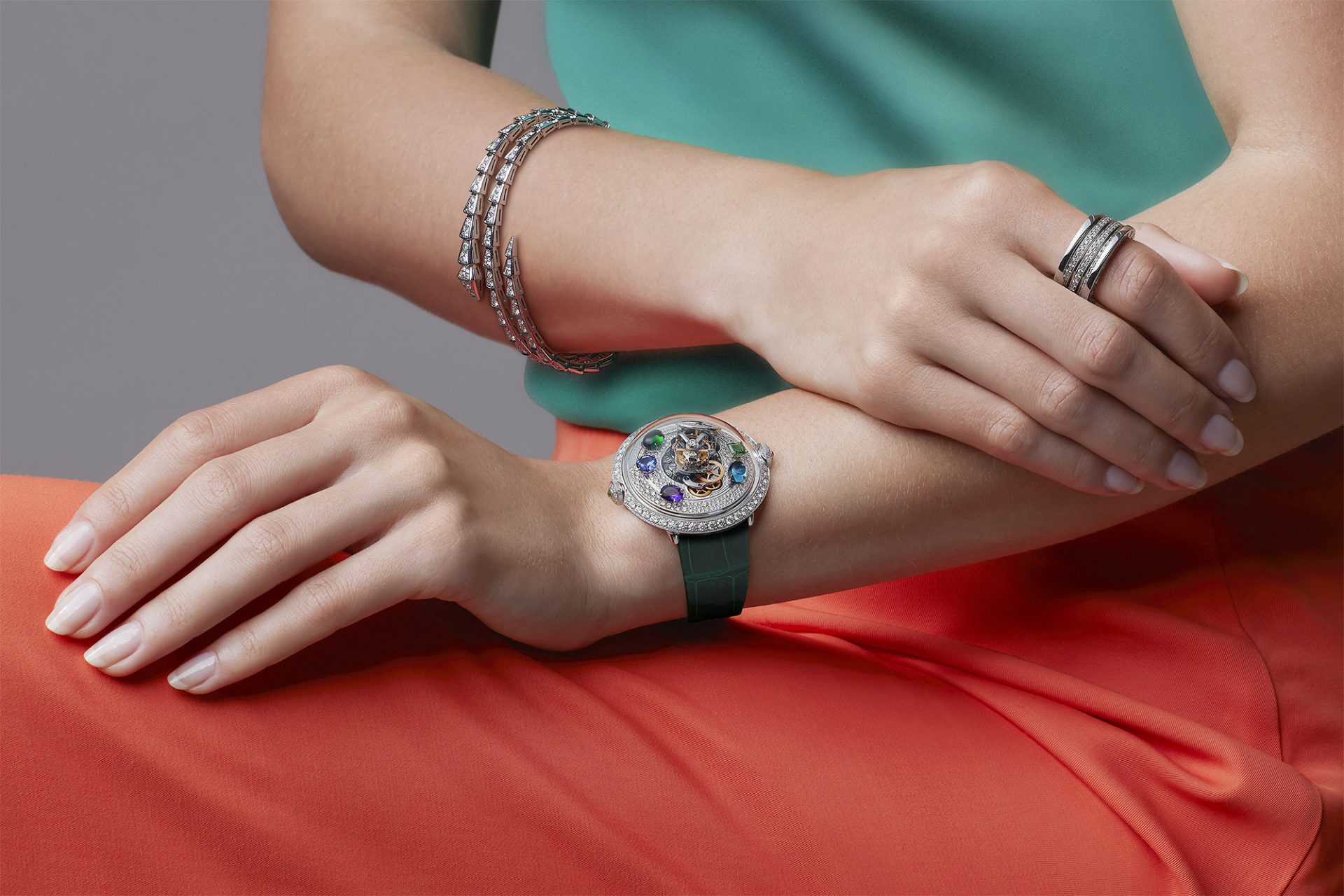 Part of the LVMH Group, Bulgari was founded in Rome in 1884 as a jewellery shop. Known as the magnificent Roman jeweller and master of coloured gems, Bulgari has established a worldwide reputation for Italian excellence and enjoys renowned for its exquisite craftsmanship. The company’s international success has evolved into a global and diversified luxury purveyor of products and services, ranging from fine jewels and high end watches to accessories and perfumes, and featuring an unrivalled network of boutiques and hotels in the world’s most exclusive shopping areas.

Demonstrated through its numerous philanthropic partnerships, Bulgari deeply believes in innovating the present for a sustainable future through its commitment to Corporate Social Responsibility and giving back – to nature and to the community 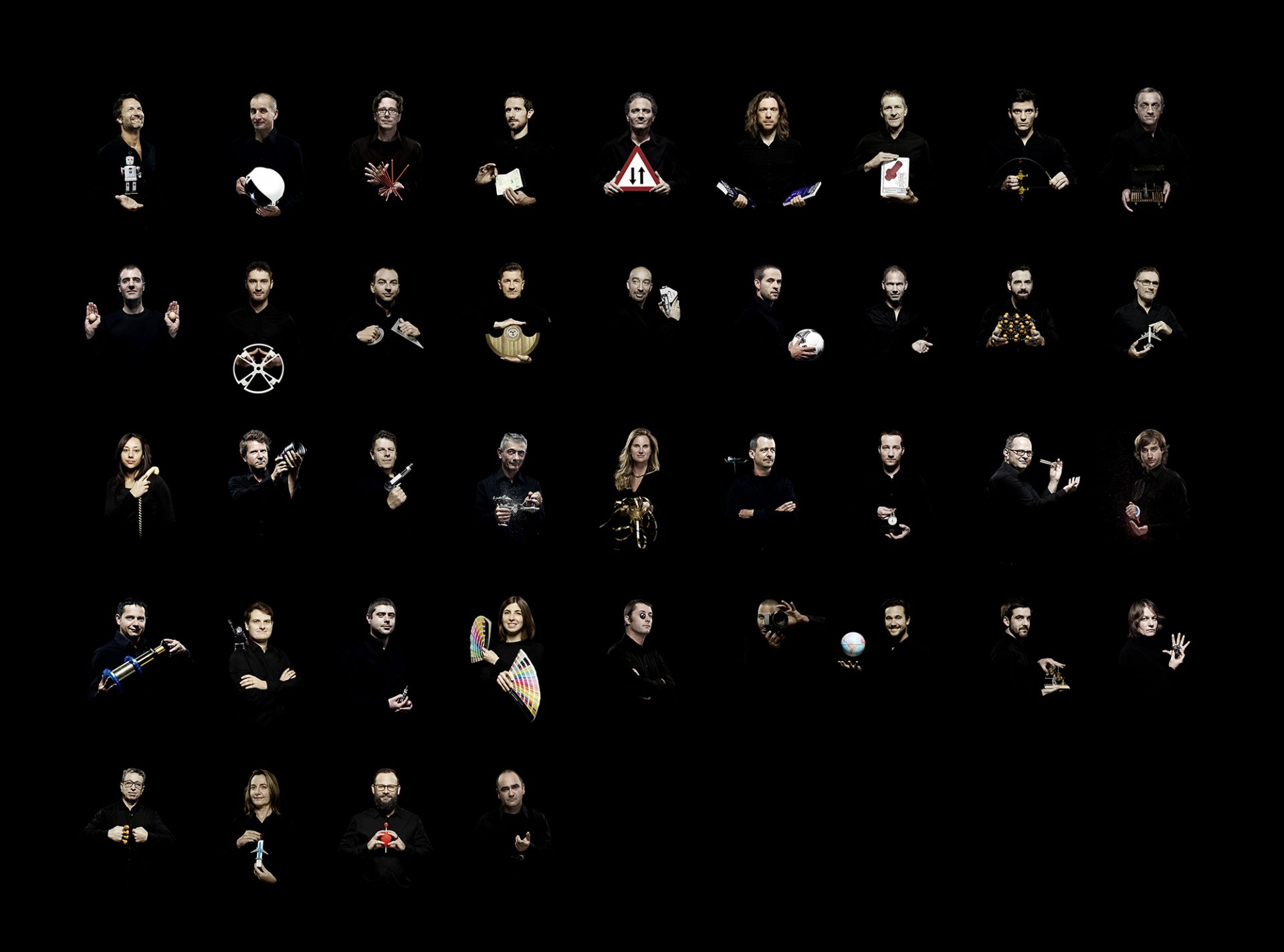 Product design: Eric Giroud / Through the Looking Glass and Bulgari

Gemstone for dial-plate and crowns: Bulgari 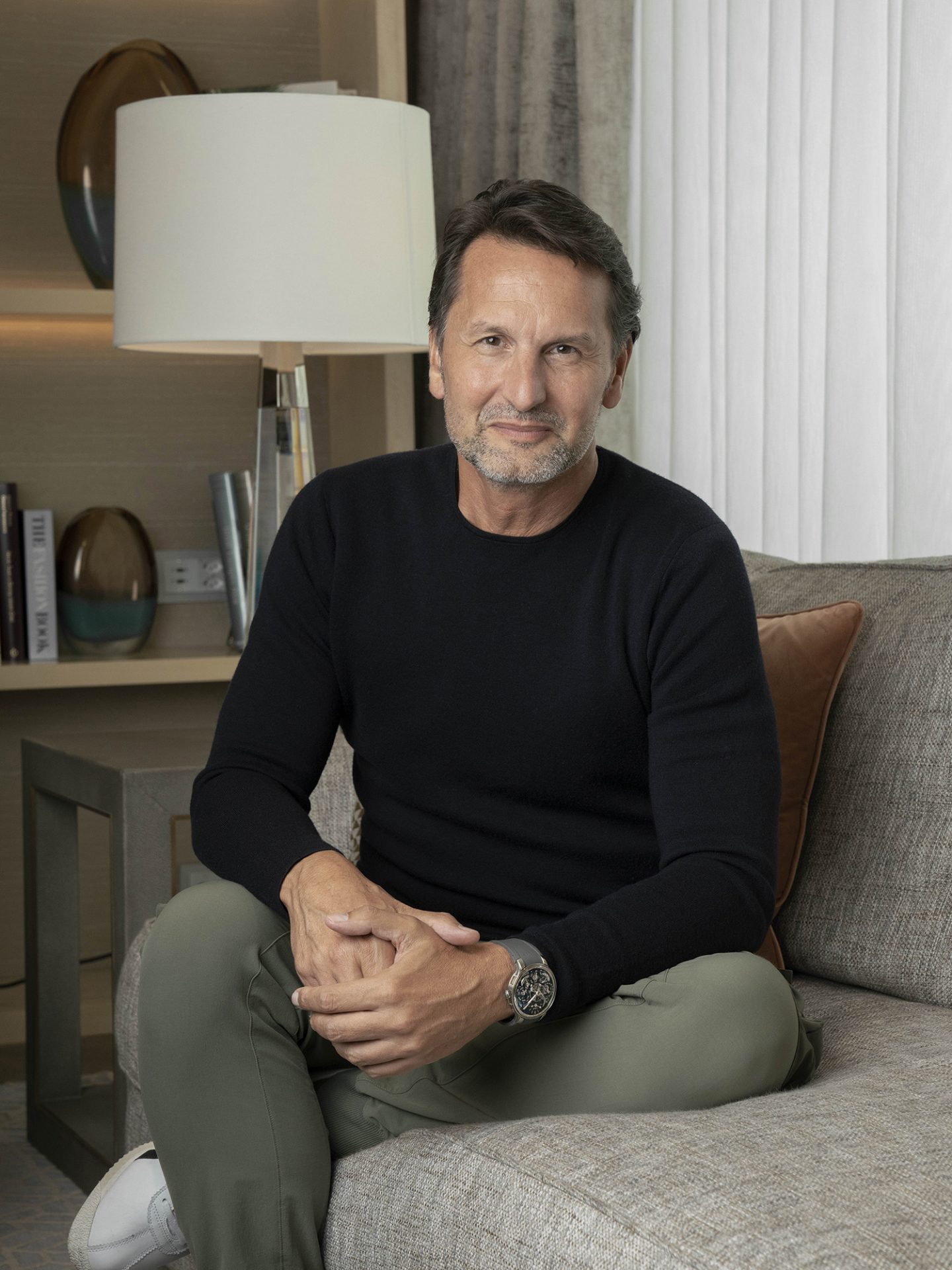 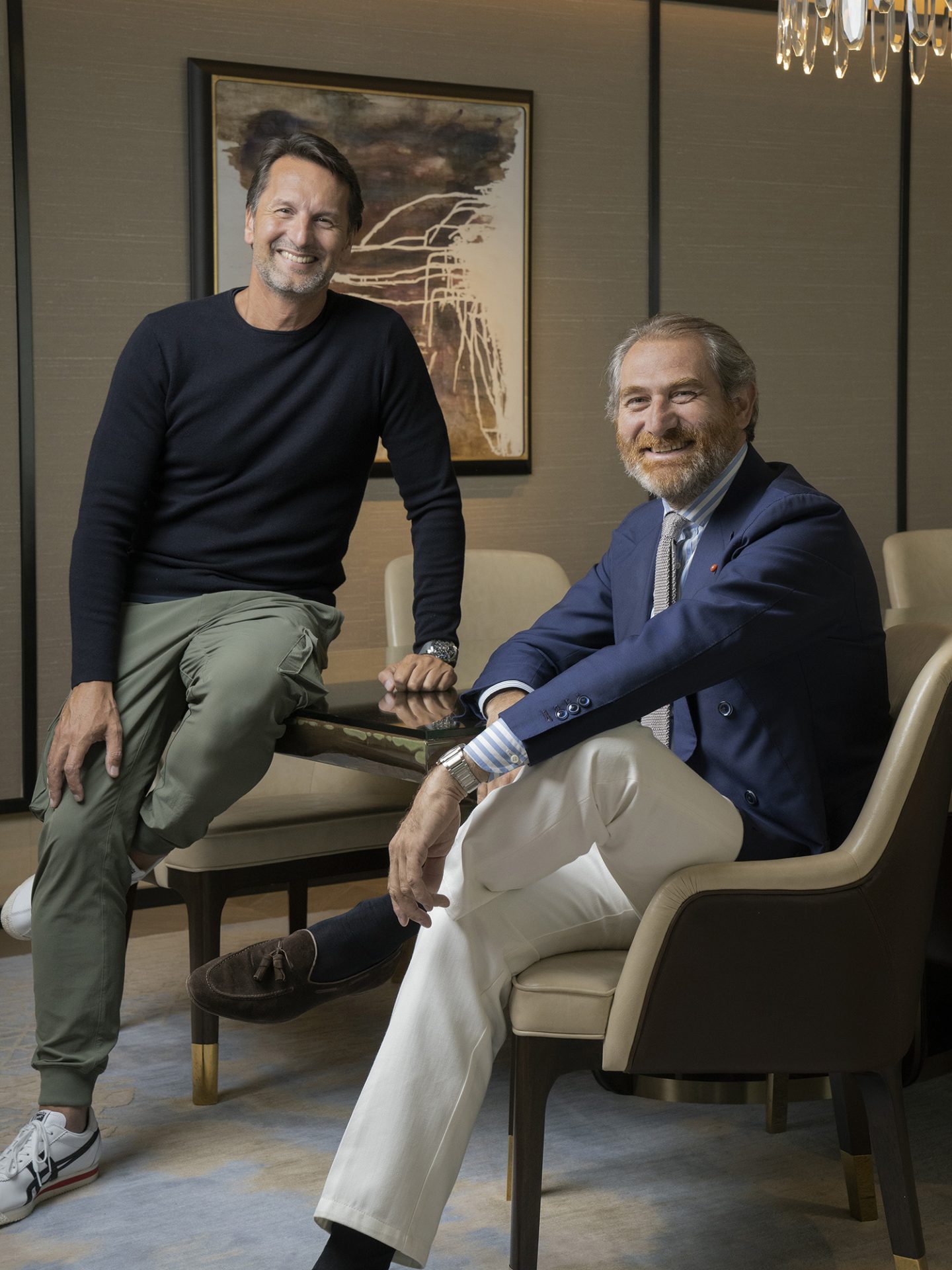 There have been distinguished accolades reminding us of the innovative nature of MB&F’s journey so far. ‘To name a few, there have been no less than 7 awards from the famous Grand Prix d’Horlogerie de Genève: in 2021, MB&F received two prizes: one for LMX as the Best Men’s Complication and one for the LM SE Eddy Jaquet ‘Around The World in Eighty Days’ in the ‘Artistic Crafts’ category, in 2019, the prize for Best Ladies Complication went to the LM FlyingT, in 2016, LM Perpetual won the Best Calendar Watch award; in 2012, Legacy Machine No.1 was awarded both the Public Prize (voted for by horology fans) and the Best Men’s Watch Prize (voted for by the professional jury). In 2010, MB&F won Best Concept and Design Watch for the HM4 Thunderbolt. In 2015 MB&F received a Red Dot: Best of the Best award – the top prize at the international Red Dot Awards – for the HM6 Space Pirate.