In October 2011, people thought they knew what MB&F stood for. Four Horological Machines had been launched, each one more audacious than the last. MB&F founder Maximilian Büsser decided it was time to do something different – again. How does one go about disrupting a habit of iconoclasm? By turning to history, but not a history that we recognised. The MB&F Horological Machines came from an imagined future, so it was only natural that the Legacy Machines drew from an imagined past. Expressed differently: what would MB&F have created a century ago, during the golden age of watchmaking? 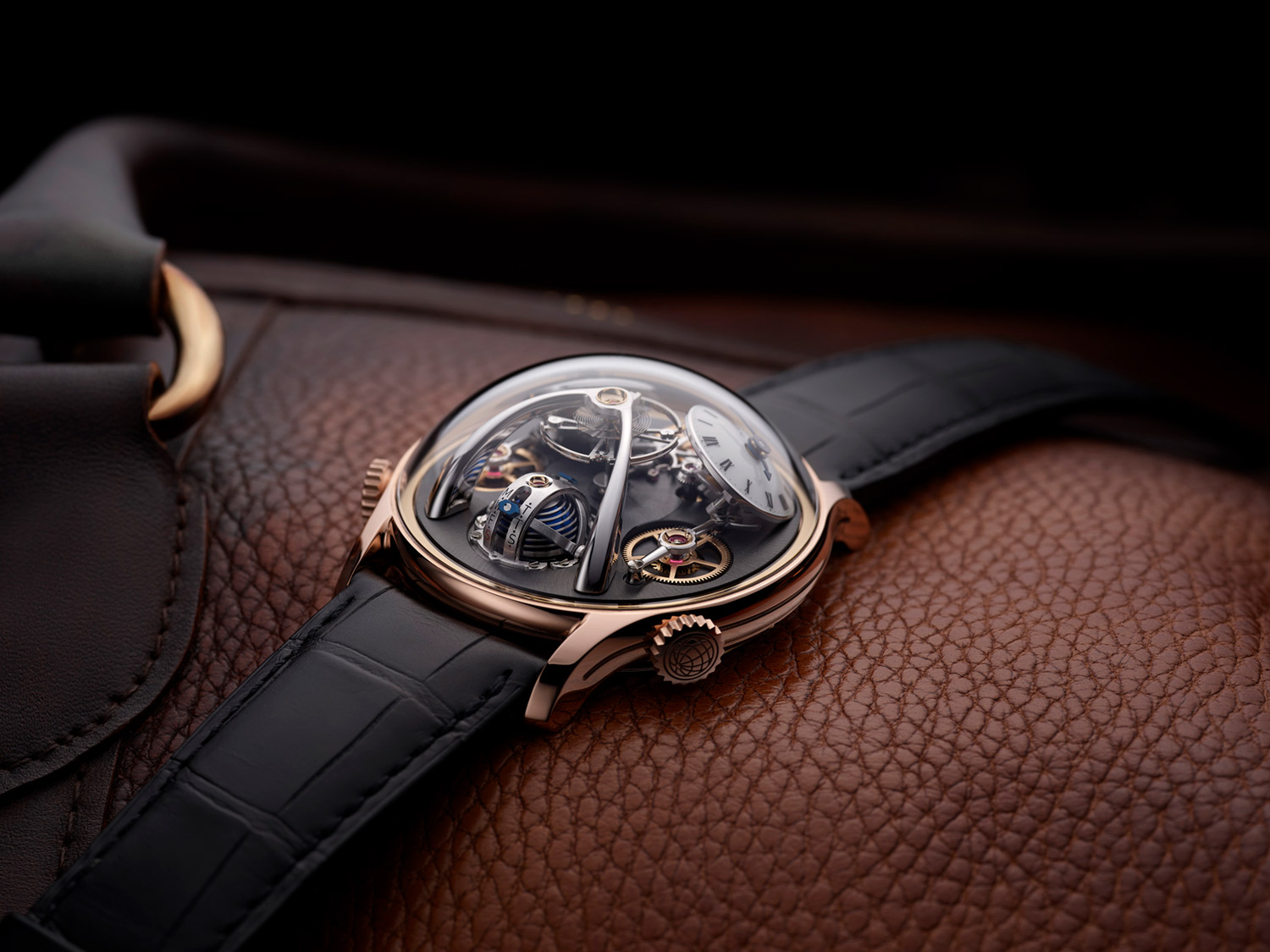 As always with MB&F, the Legacy Machine No1 movement was the result of collaboration – in this case with two exceptional Friends, two horology stars as talented as they are different: Jean-François Mojon, known for his innovative engineering, and Kari Voutilainen, a living legend of classic watchmaking.

LM1 featured a round case – a first for MB&F – along with white lacquered dials, blued hands, and a hallucinatory “flying” balance wheel, plucked from its expected rear-mounted location and suspended like a sky-hovering extra-terrestrial visitor, oscillating under a domed crystal. While Horological Machines 1 through 4 were exuberant flights of imagination, Legacy Machine N°1 was a triumph of reimagination. By harnessing the design conventions of traditional watchmaking to form this singularly defiant configuration of a watch movement, LM1 turned out to be MB&F’s most subversive creation since the company’s inception in 2005.

The mesmeric spectacle of the suspended balance became a conceptual and mechanical leitmotiv that defined the Legacy Machine collection — illustrating how a watch could simultaneously be a part of and apart from traditional watchmaking. 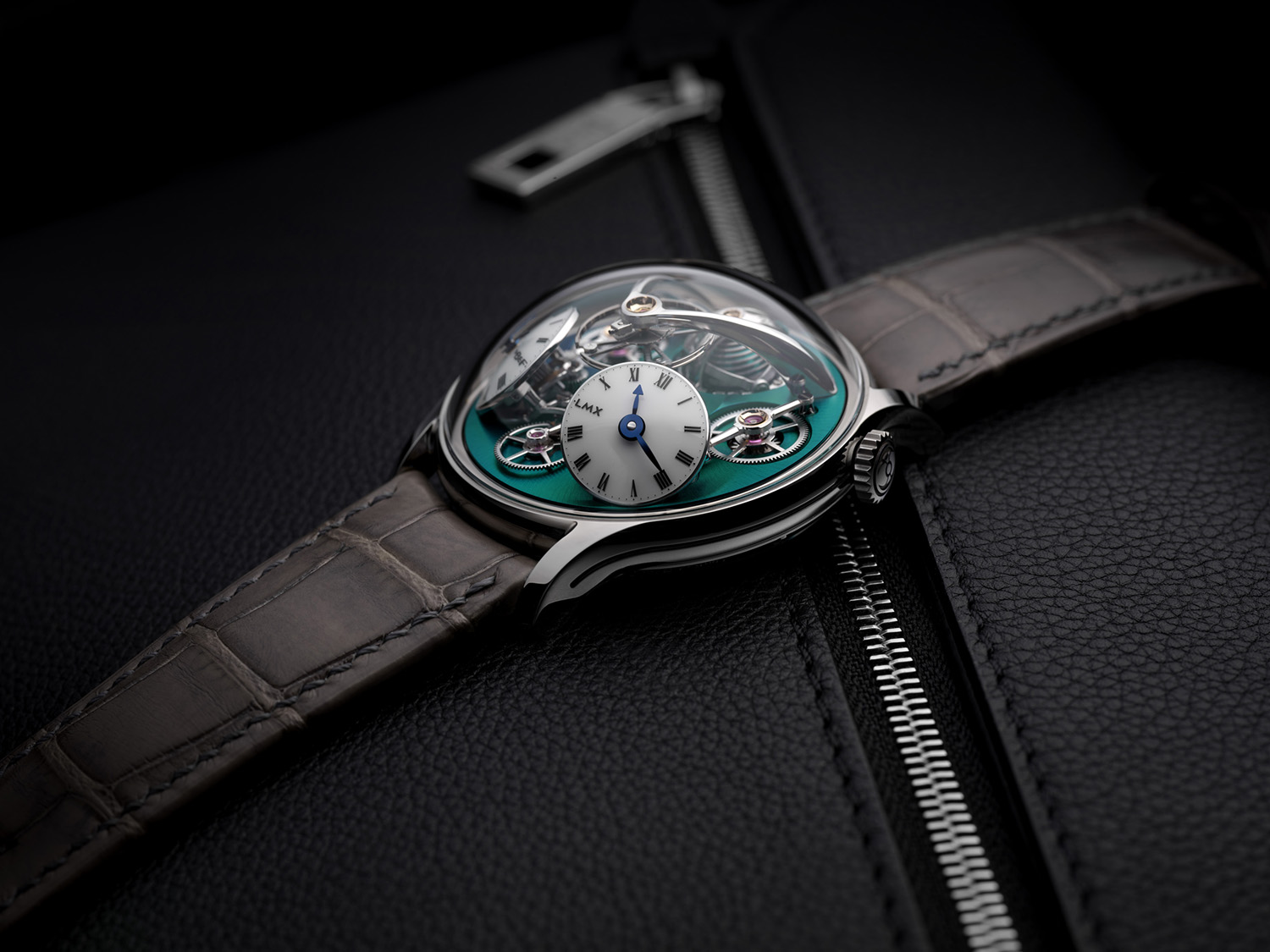 Subsequent Legacy Machines followed this blueprint of brilliant unorthodoxy: with LMX, an impressive series of no less than EIGHT world-premiere calibres. Conceived with another exceptionally talented Friend, Stephen McDonnell, LM Perpetual (2015) brought about a fundamental reengineering of the revered perpetual calendar complication. LM FlyingT (2019) embodied a novel vision of feminine watchmaking — fierce yet elegant, stark yet complex. LM Thunderdome (2019), developed with multi-axis tourbillon expert Eric Coudray, set a new world record with the dizzying speed of its TriAx mechanism. In parallel to these prestigious collaborations, MB&F began conceiving its own movements during this decade; the LMX engine is the sixth fully conceived by MB&F’s in-house engineering team, a considerable achievement for a brand born in the new millennium.

Many did not realise in 2011 how risky this was, but MB&F took a chance on its fledgling brand identity by introducing a Machine that leaned closer to the aesthetic milieu of almost every other watch company out there. Comparing an MB&F to other timepieces was now possible… But great risk often comes with great reward. The Legacy Machine collection has received widespread acclaim over the years, chief among them four awards from the Grand Prix d’Horlogerie de Genève, the industry’s ultimate accolade.

Have Legacy Machines changed the MB&F Horological lab of 2011? Profoundly. When LM1 surprised the watchmaking world 10 years ago, industry experts predicted that MB&F would radically shift its entire production (and sales) to the more consensual aesthetics offered by Legacy Machines. That did not happen: the unconventional Horological Machines continue to represent an essential part of MB&F’s production… but 10 years later, watch collectors have naturally also embraced the more classic-minded Legacy Machines – which have gained their own very significant place. In 2021 MB&F continues to evolve in both directions, seemingly quite different, but always with a fierce sense of independence and creativity.

THE LEGACY OF A DECADE 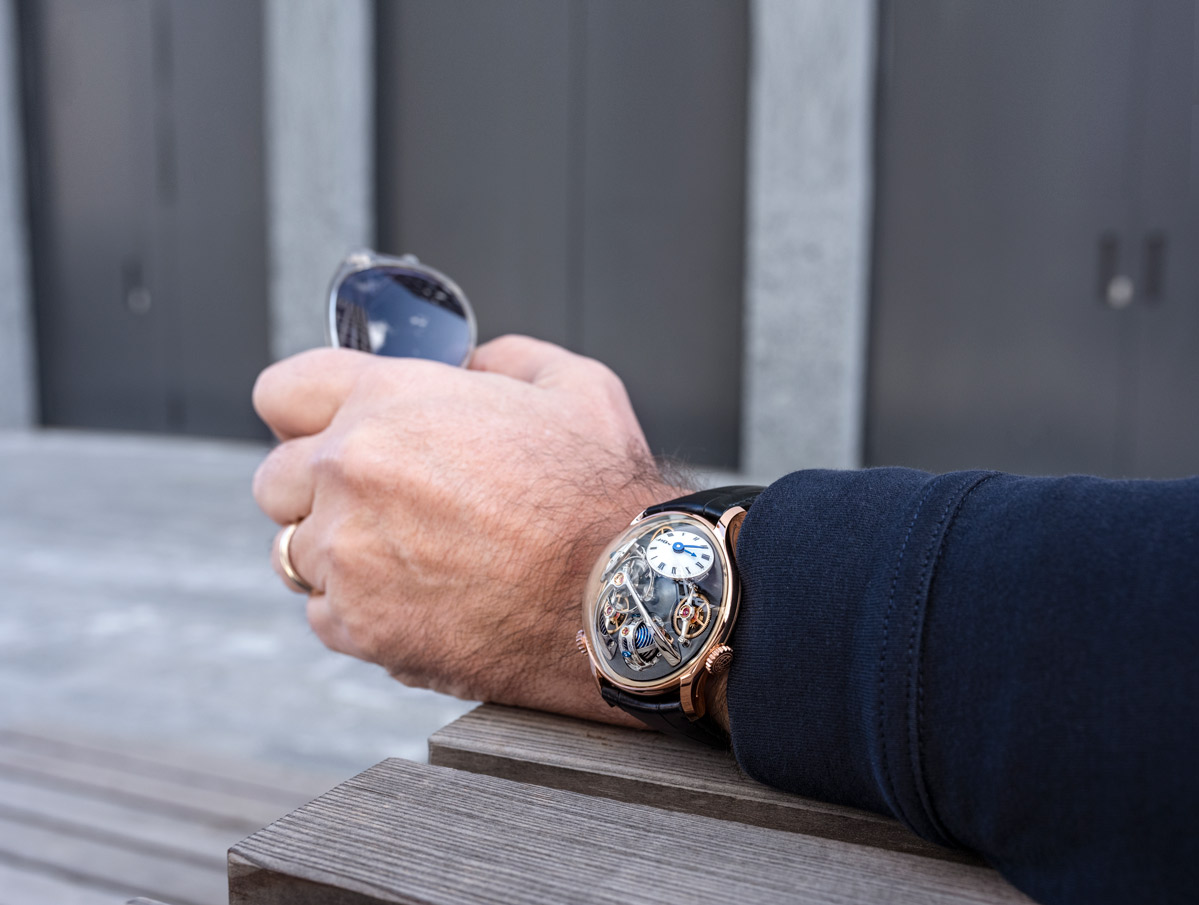 In the MB&F universe, X has a special significance, based on the Roman numeral for 10. It signals a 10th anniversary, like the HM3 FrogX (2020) marking a decade of the totemic HM3, or HMX (2015), which headlined the 10th year of MB&F. But X is more than an ancient alternative to the Arabic numeral 10. In algebra, X is the unsolved variable; in cartography, X is the desired destination. X represents the indescribable, the unexplainable and the uncategorisable; it symbolises everything we do not know – yet. 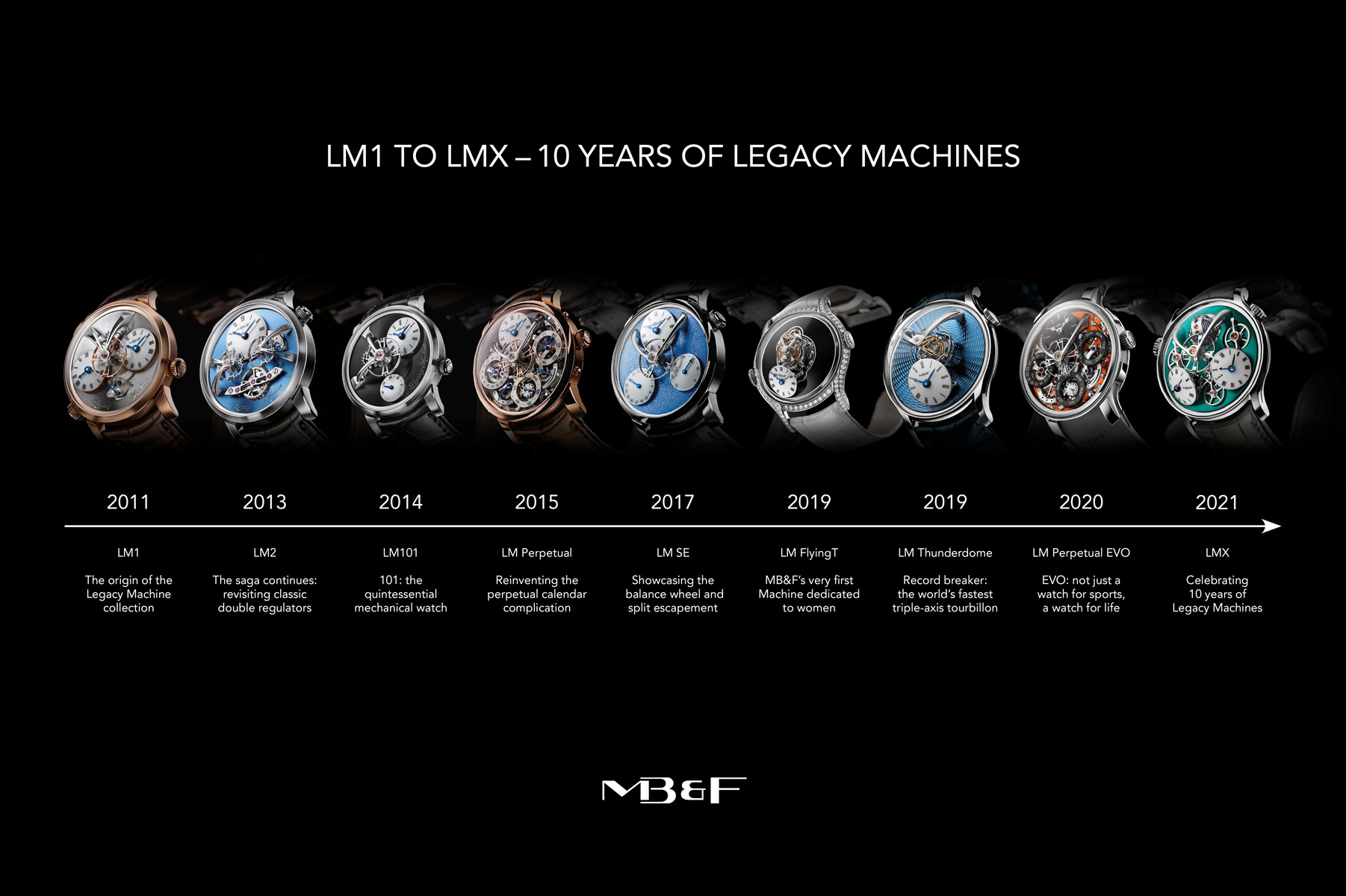 Back in October 2011, MB&F had just launched Legacy Machine N°1, the first creation of a new collection, alongside the existing Horological Machines; one creative lab, two interpretations of time-telling. LMX returns to the earliest encounter with the Legacy Machine collection, utilising the same expression comprising a central flying balance wheel and two dials, although everything else is different.

Those familiar with MB&F’s very first Legacy Machine will instinctively know how LMX operates. Two dials of stretched white lacquer, each with its own display of hours and minutes. The dial on the right is set by the crown at the 2 o’clock position, which bears an engraving of the MB&F battle-axe and also winds the movement. The crown at 10 o’clock, engraved with a globe to acknowledge the potential use of a second time zone, sets the time of the left dial. Unlike the first Legacy Machines however, both dials are tilted at an angle – a more complex feature present on the most recent Legacy Machines, requiring the transfer of energy from horizontal to vertical planes thanks to conical gears. 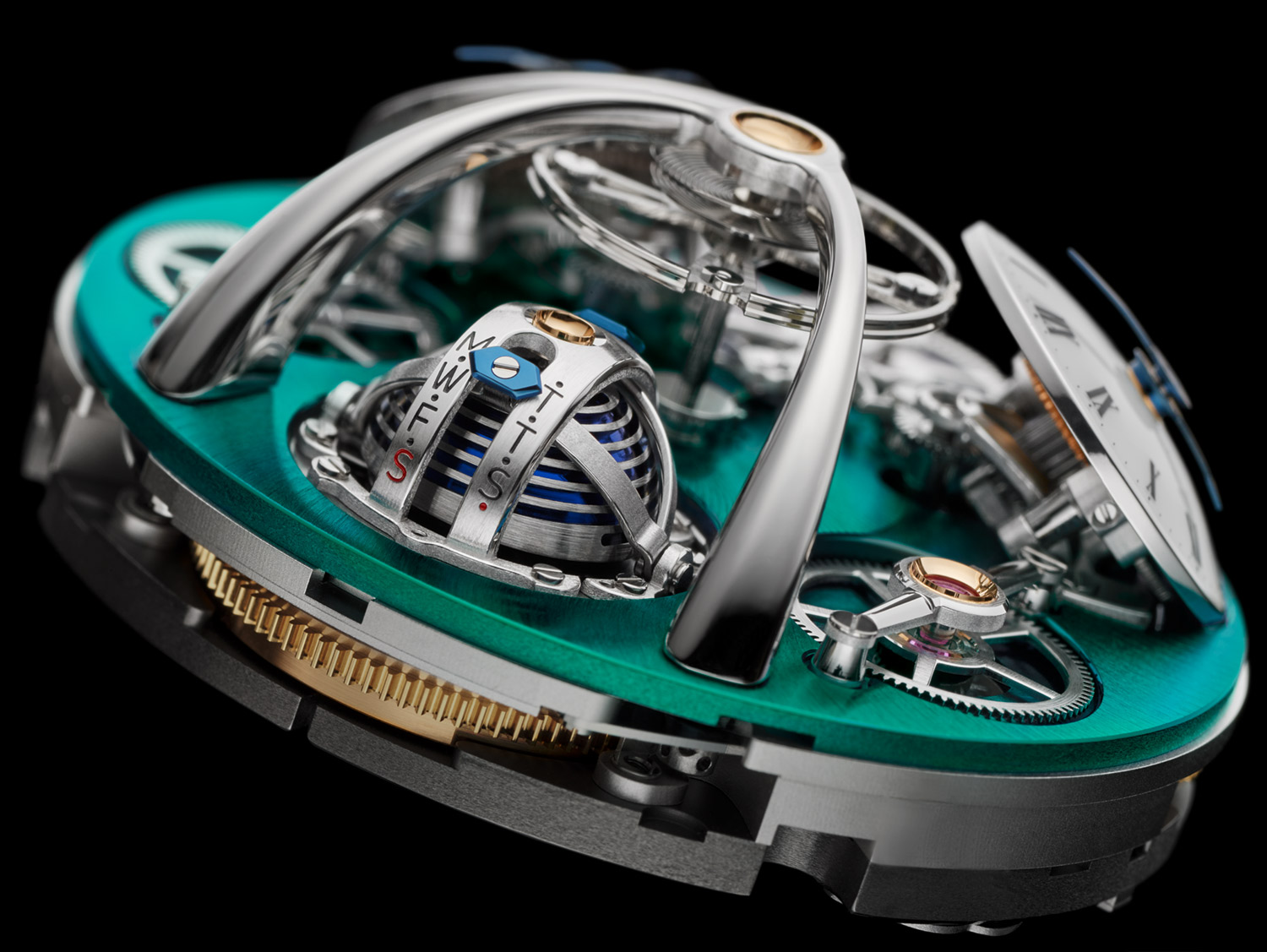 While the first few Legacy Machines took a selective approach to what was showcased between dial plate and sapphire crystal dome, later models such as LM Perpetual, LM FlyingT and LM Thunderdome were more open and demonstrative about their mechanical prowess. LMX follows this latter approach, revealing functional elements such as the battle-axe-shaped escapement bridge and gear-train components. Three large wheels are particularly visible: placed next to each winding crown, two are set in motion when setting the time on the corresponding time display, while the gear at 6 o’clock is the common seconds’ wheel.

Of particular note is the new bespoke balance wheel, a 13.4mm behemoth with inertia blocks that marks a departure from the more traditional screwed balances and offers greater accuracy to the watchmaker in regulating the heart of LMX. Other refinements include the polished arms of the straight bridges exposed on the dial plate, manually finished to impart a curved, or bercé, profile on their upper surfaces.

In another nod to the world-first vertical power reserve indicator of Legacy Machine No1, LMX builds on this slice of MB&F history, with a completely novel three-dimensional display that showcases the engine’s impressive seven days (168 hours) of power reserve. In this evolved display, there is the option to select between two modes of counting down the power reserve. Two markers are positioned on opposite sides of a hemisphere; one framed by an arched scale numbered 1 to 7, another with a scale showing the days of the week.

This complex and completely novel interplay of components is given an additional level of intricacy, by the rotation of the entire power-reserve display itself. This allows wearers to choose their preferred mode of power-reserve indication: by continuing to wind the battle-axe crown even after the power reserve is fully replenished, wearers can adjust the orientation of the indication in order to make the day-of-the-week or numeric scale more visible when LMX is on the wrist.

Like a perfectly balanced X, the engine of LMX is deeply symmetrical – not only dial-side but also as observed through the sapphire case back, revealing the three barrels placed evenly around the centre, accentuated by the sunray pattern of the Côtes de Genève finishing. A treat for those who can read the language of watch movements, who can discern expert intent and refined purpose behind the placement of each component.

The X in LMX is more than just a symbol for symmetry, or another way to indicate the numeral 10. LMX is the crossroads where the first and second decades of the Legacy Machine Collection meet. 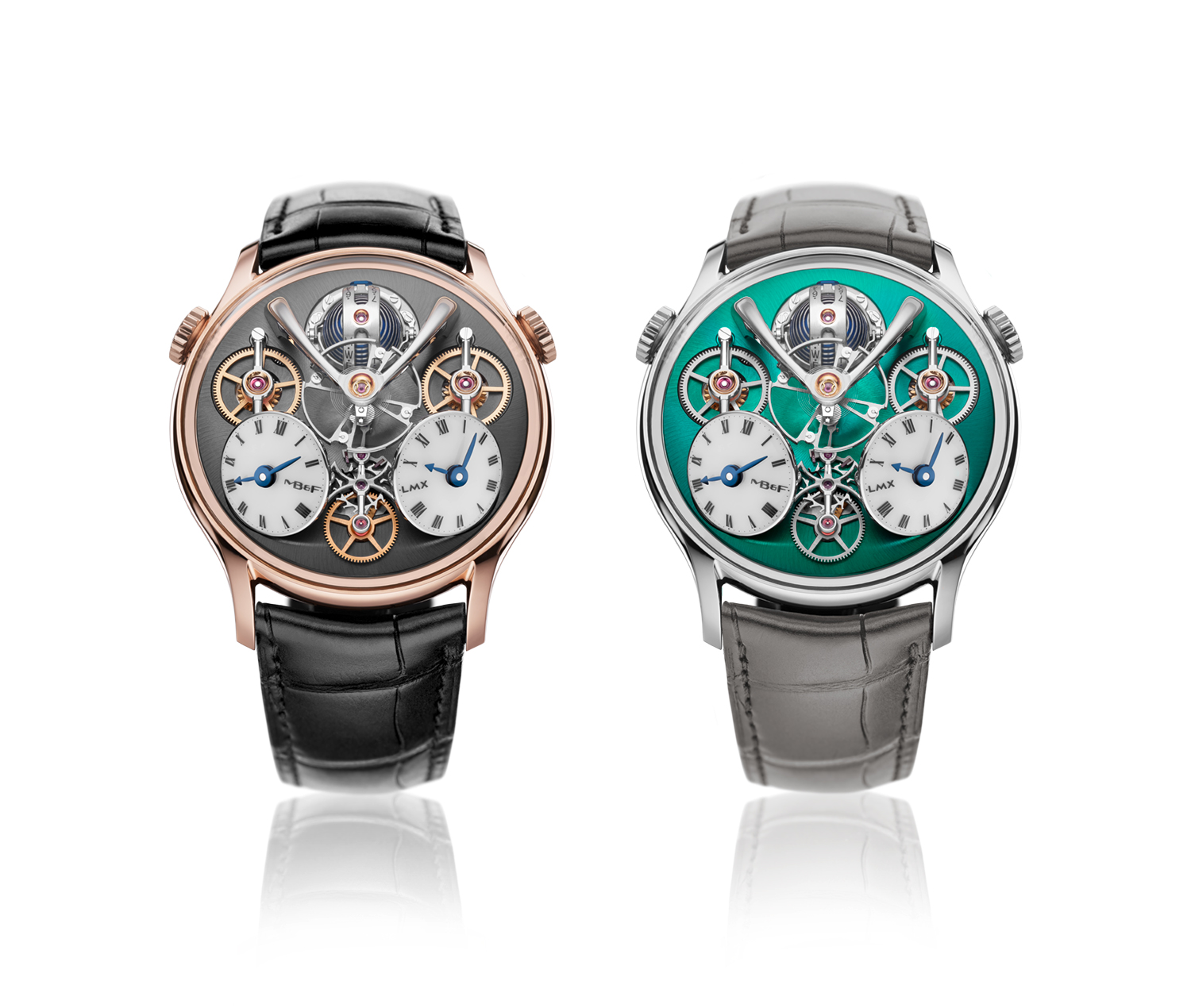 – 18 pieces in 18k red gold with black NAC treatment on plates and bridges;

– 33 pieces in grade 5 titanium with green CVD treatment on plates and bridges.

2013  Legacy Machine No2: two years after the first Legacy Machine, LM2 demonstrates that MB&F is committed to developing the Legacy Machine collection, with a complex timepiece revisiting the works of famous watchmakers on double regulator systems.

With Legacy Machine 101, MB&F focuses on the essentials of a mechanical wristwatch; the LM101 movement is also the first entirely conceived by MB&F’s in-house engineering team.

2015  MB&F teams up with Stephen McDonnell to reinvent the traditional perpetual calendar mechanism. The result is the ground-breaking Legacy Machine Perpetual, offering reliability and user-friendliness.

2017  Again with Stephen McDonnell, MB&F presents the LM Split Escapement (LM SE), showcasing the beauty of the flying balance wheel and the split escapement initially conceived for the LM Perpetual.

2019  In March, MB&F chooses the Legacy Machine collection to launch its first timepiece dedicated to women, the LM Flying T

MB&F and Eddy Jaquet, one of the watchmaking industry’s most talented master engravers, present a series of 8 unique pieces of the LM Split Escapement, inspired by the novels of Jules Verne.

MB&F chooses the Legacy Machine collection to present another important evolution: its first timepiece sporting the “EVO” suffix, designed for more active, everyday use. The LM Perpetual EVO “is not just a watch for sports, it is a watch for life”.

2021  Launch of LMX, celebrating 10 years of Legacy Machines. Echoing the traits of LM1 but in an entirely new execution, LMX features two time zones and a three-dimensional power reserve, while the tilted dials and sleek case design take from the LM FlyingT and LM Thunderdome. 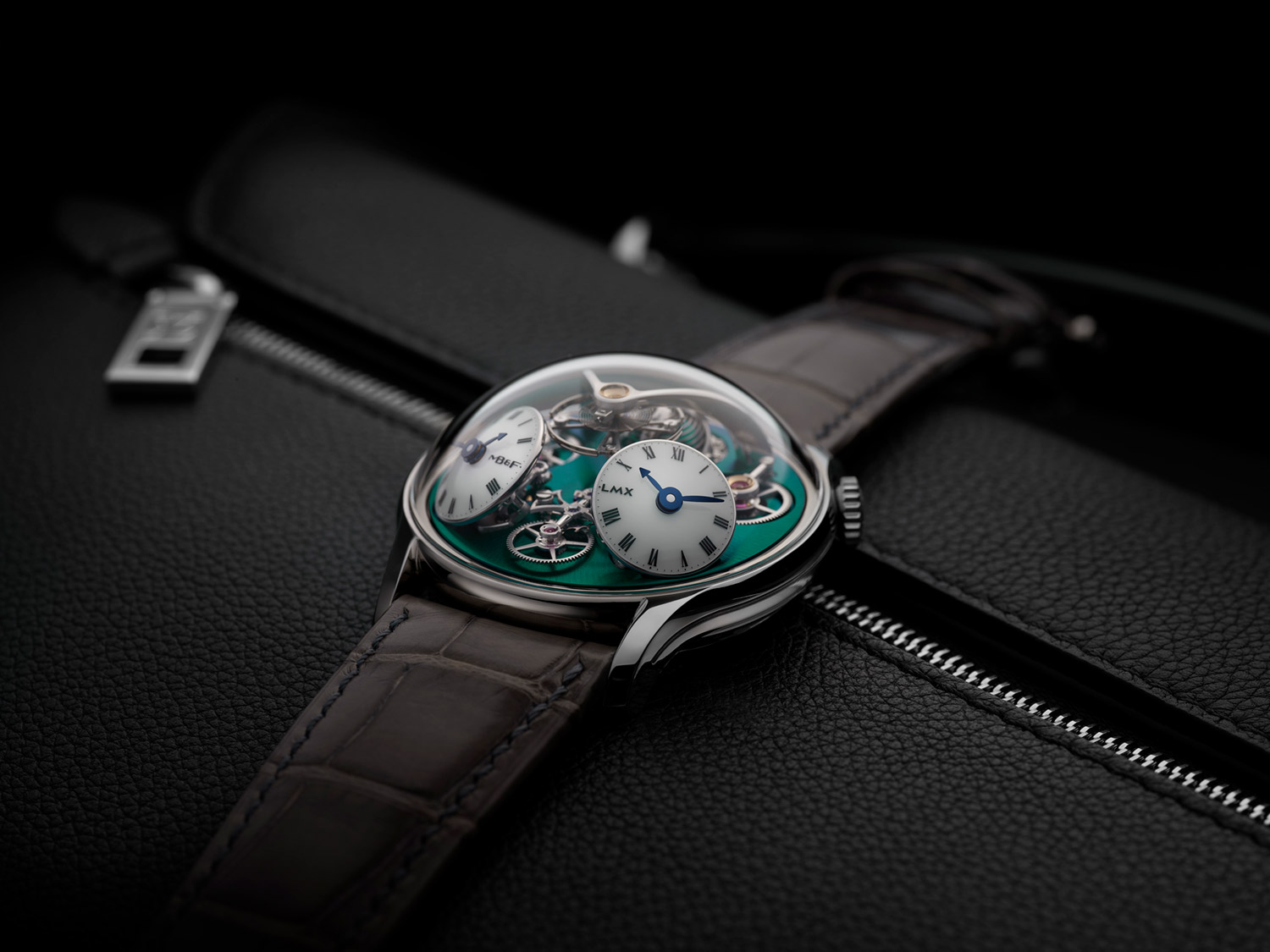 – 33 pieces in polished grade 5 titanium with green CVD treatment on plates and bridges.

hand-made engravings; polished arms of the straight bridges exposed on the dial plate, manually finished to a curved “bercé” profile on their upper surfaces. 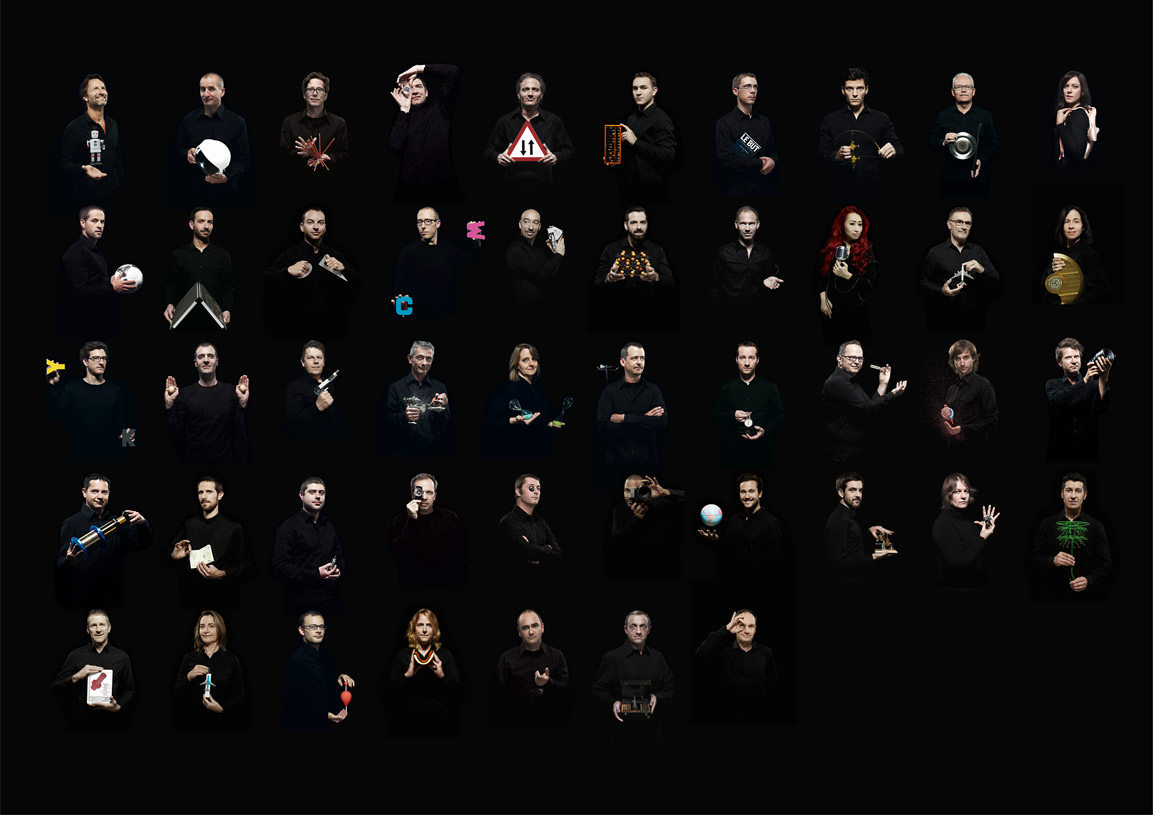 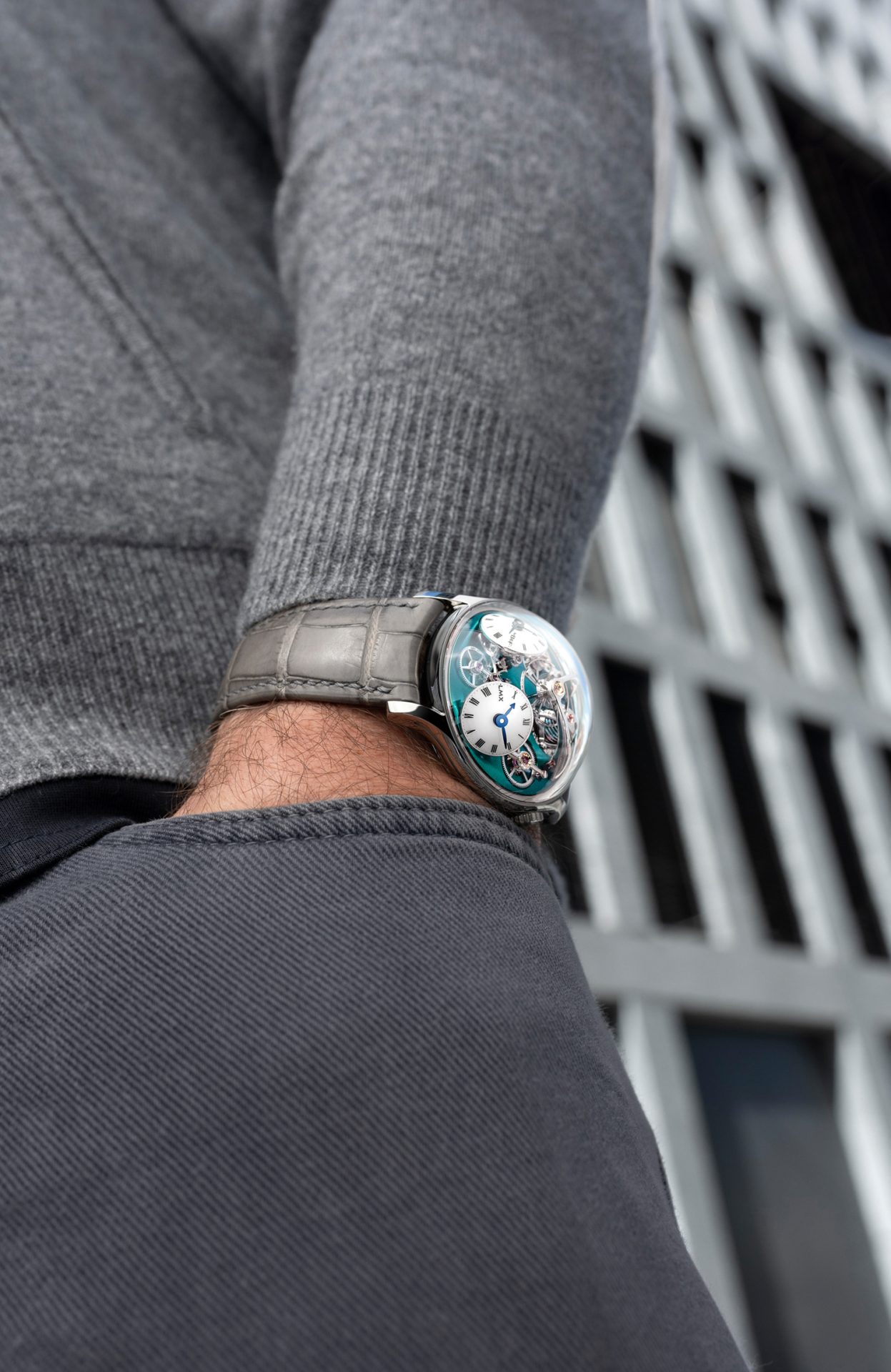