MB&F joins Ahmed Seddiqi & Sons to celebrate the UAE ‘Year of the 50th’with a surprising new interpretation of its Legacy Machine Split Escapement. 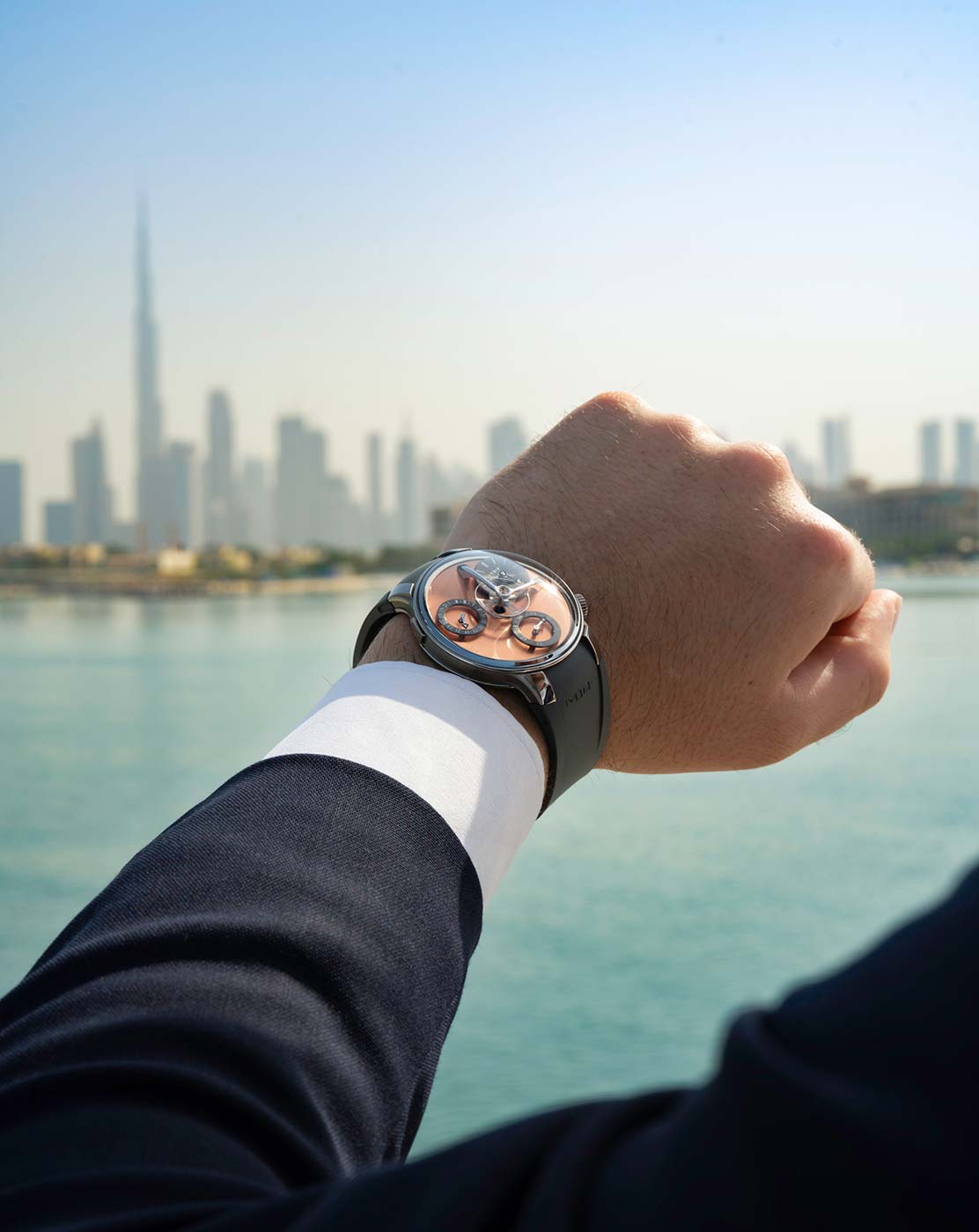 This year marks the 50th anniversary of the unification of the seven emirates under one flag with a whole year of celebrations running from April 2021 until the end of March 2022. The UAE’s leading luxury watch and jewellery retailer, Ahmed Seddiqi & Sons, is commemorating the ‘Year of the 50th’ with the creation of over 35 instantly covetable limited-edition timepieces, including a LM Split Escapement EVO – UAE Golden Jubilee Limited Edition of 10 pieces.

MB&F’s Founder Max Büsser explains why this limited edition is important to him on a personal level: “I have been living in the UAE for seven years now and the country has been incredibly hospitable and welcoming to me and my family. So when the Seddiqi family asked me if I wanted to create a limited edition for this historic occasion, it was a wonderful way for me to say thank you.”

THE STORY OF THE LM SPLIT ESCAPEMENT

The idea behind the LM Split Escapement started life in 2015 with the LM Perpetual. Designed and conceived by Irish master watchmaker Stephen McDonnell, there were two criteria for the perpetual calendar: make it fool-proof and display MB&F’s large signature suspended balance wheel in the centre of the dial. McDonnell was soon to realise that there was a problem: there was nowhere to put the escapement. The concept had worked on the previous Legacy Machines, where the balance wheel was on the front of the watch along with the escapement, but with the LM Perpetual, there was just no room for both the balance wheel and the escapement.

A man of solutions, McDonnell had the ingenious idea of creating the world’s longest balance staff that would traverse the whole movement, leaving the large balance wheel on the front of the watch and concealing the remaining parts of the escapement – anchor and escape wheel – on the opposite side of the movement, almost 12 mm below; hence the name ‘Split Escapement’.

When the LM Perpetual was unveiled, there were so many innovations to talk about that the split escapement went largely unnoticed. So, in 2017, MB&F decided to create the LM Split Escapement to highlight McDonnell’s genius idea, publicly crediting him by including his name on the watch. 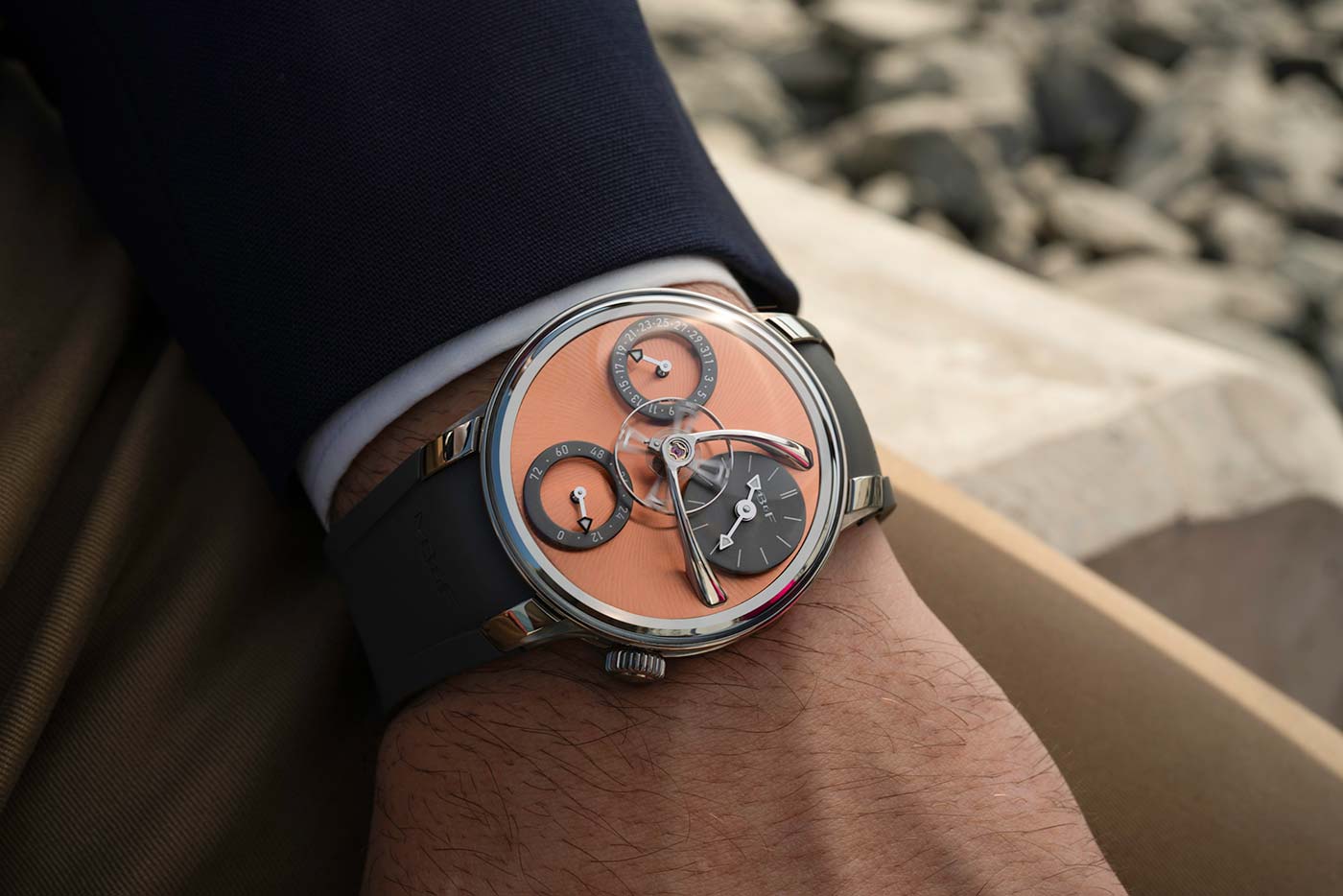 The LM Split Escapement series has always been somewhat under the radar, so the UAE Golden Jubilee was the perfect occasion to celebrate both the 50th anniversary of the UAE and this unusual mechanical marvel.

For this limited edition of only 10 pieces there are a host of changes that radically modify the design of the watch. Firstly, the whole mechanism has been rotated clockwise by 30 degrees, with the crown at 4:30 instead of 2 o’clock. This completely changes the symmetry of the watch, giving it a totally new character.

Second, this special edition receives the new EVO case, offering enhanced comfort and robustness – and which until now has only ever been used in the LM Perpetual EVO series. The EVO case design features a no-bezel construction, with the domed sapphire crystal fused directly to the titanium case, integrated lugs and strap, and a water-resistance of 80 metres achieved thanks to a screw-down crown. The movement is suspended on the innovative “FlexRing” system, a specially developed monobloc shock-absorbing mechanism that works against both vertical and horizontal shocks.

Finally, for the very first time in MB&F history, the dial plate comes in a rich salmon colour, while two of the dark grey sub-dials – for the date and power reserve indicator – have been opened up. Movement-side, the special darkened treatment creates heightened contrast between the wheels, the rhodium-plated barrels and the rose gold details.

The manual-winding, 298-component movement uses the same base as the LM Perpetual with double barrels, a 72-hour power reserve, and a date-changing security system that prevents the user from inadvertently damaging the movement when adjusting the date.

Special anniversaries deserve special timepieces and the LM Split Escapement EVO – UAE Golden Jubilee Limited Edition is the perfect way to join the UAE celebrations as the country looks ahead to the next 50 years.

Ahmed Seddiqi & Sons is the region’s leading retailer of luxury watches & jewellery. Established in 1950, the company has continuously developed and nurtured the needs of its clients through the combination of expert curation of its portfolio and commitment to service excellence. Today, the company is recognised as a pioneer amongst retailers in the region, with an extensive collection of over 60 luxury timepiece & jewellery brands across 40 locations in the UAE. 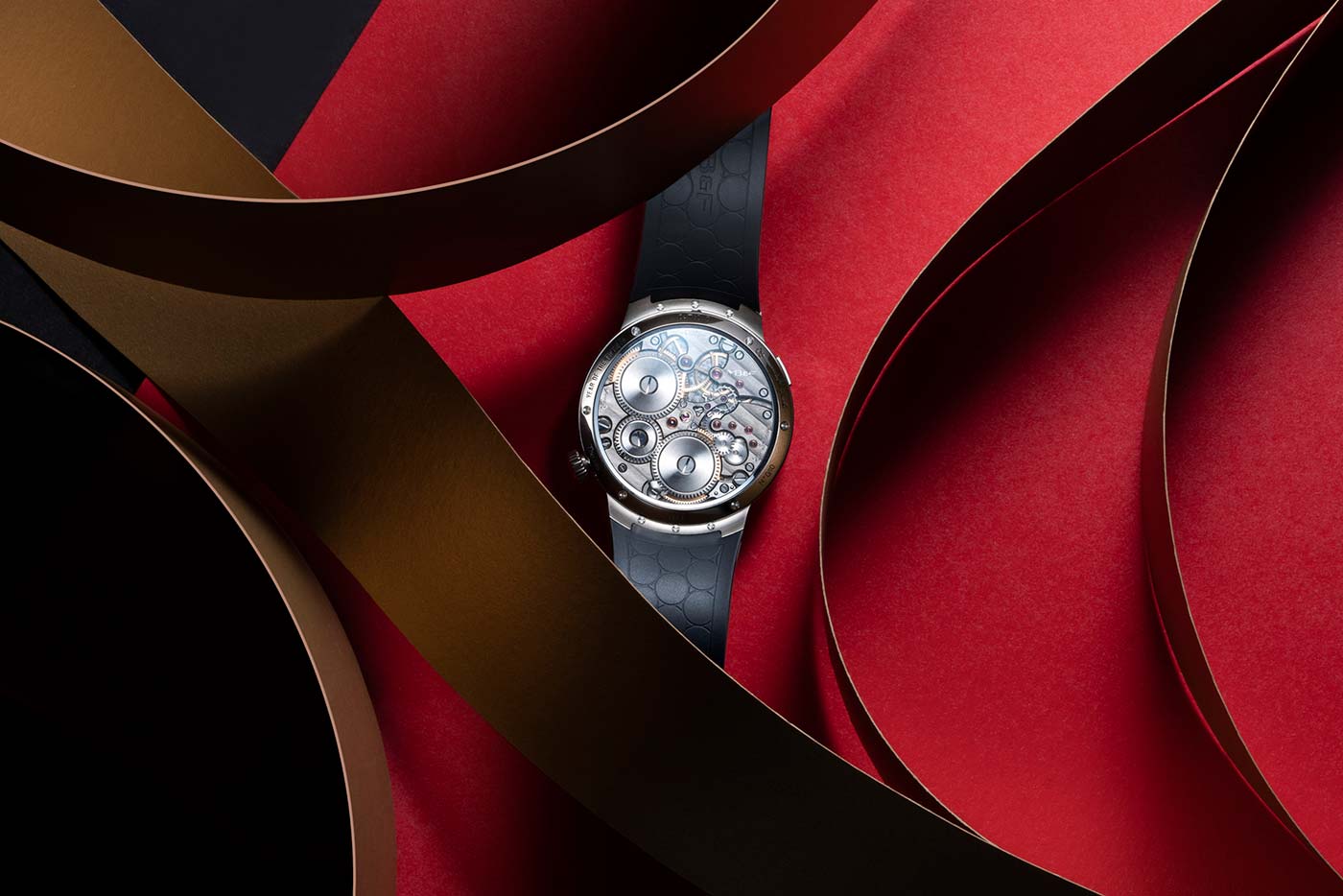 Split escapement with the balance wheel suspended above the dial and the anchor under the movement.

FlexRing: an annular dampener fitted between case and movement, providing shock protection along the vertical and lateral axes.

Galvanic dark grey dials with both SLN numerals and hands.

Push-button next to the date dial for quick adjustment of the date.

Sapphire crystals on top and display back treated with anti-reflective coating on both faces. 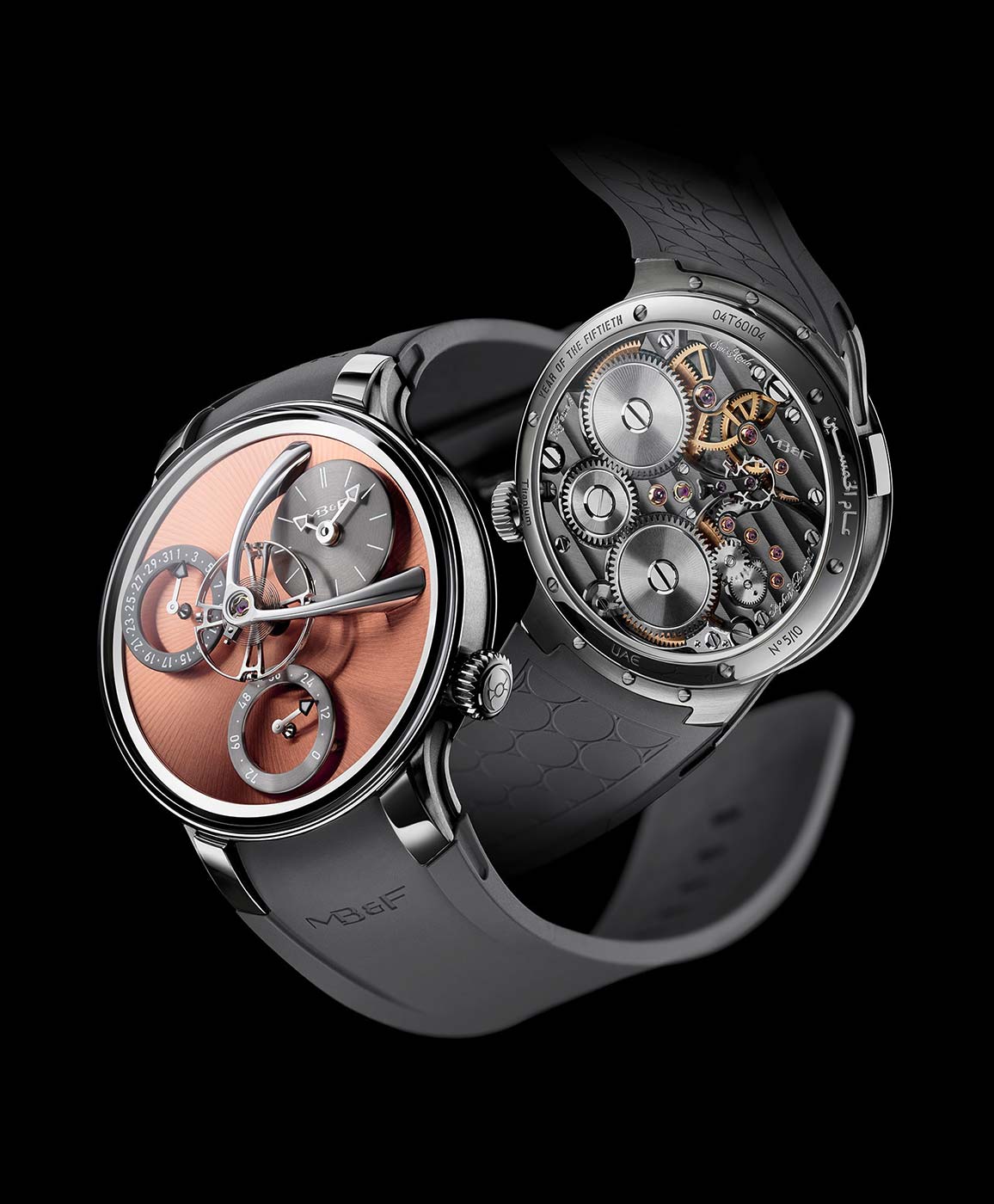 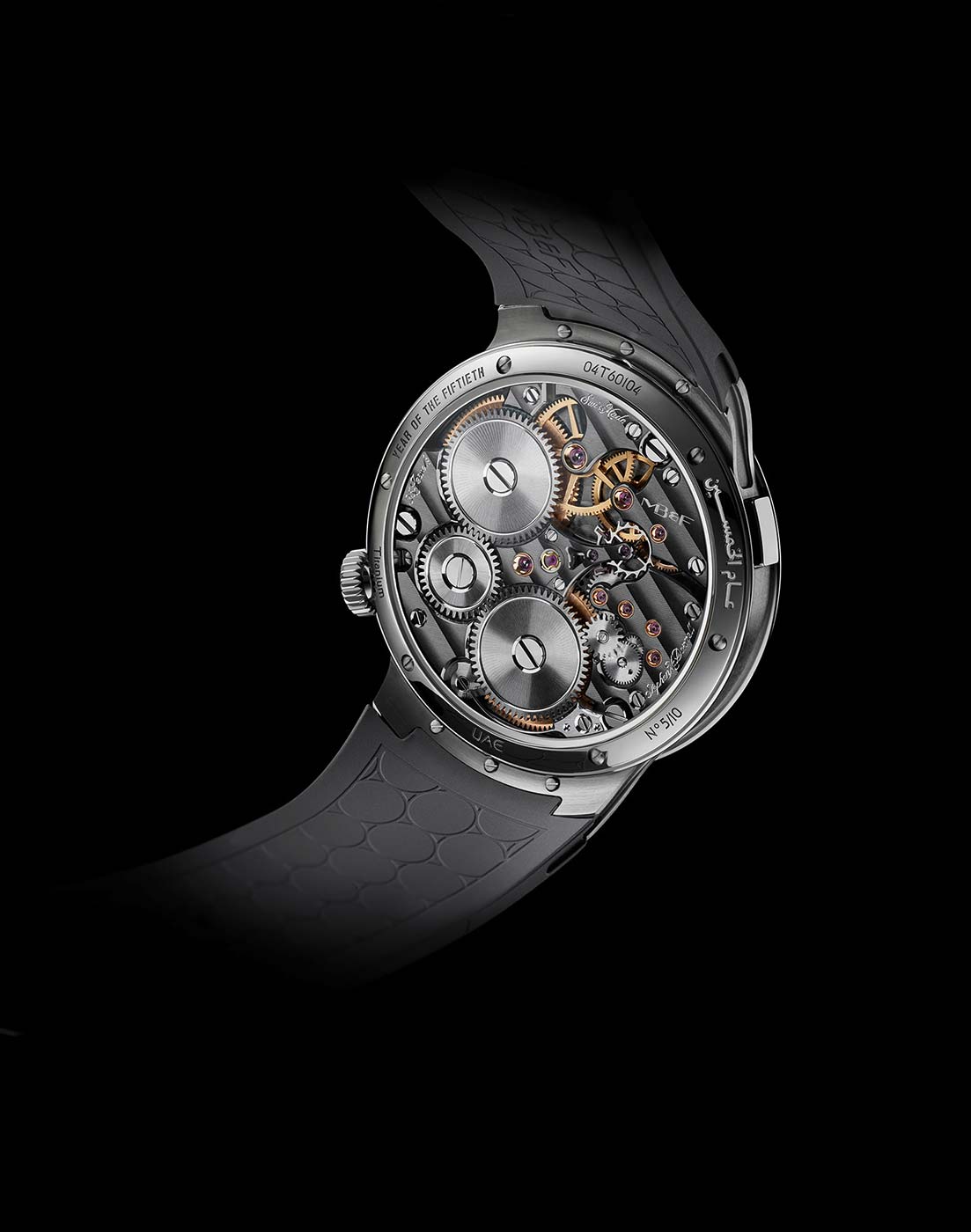 There have been distinguished accolades reminding us of the innovative nature of MB&F’s journey so far. ‘To name a few, there have been no less than 7 awards from the famous Grand Prix d’Horlogerie de Genève: in 2021, MB&F received two prizes: one for LMX as the Best Men’s Complication and one for the LM SE Eddy Jaquet ‘Around The World in Eighty Days’ in the ‘Artistic Crafts’ category, in 2019, the prize for Best Ladies Complication went to the LM FlyingT, in 2016, LM Perpetual won the Best Calendar Watch award; in 2012, Legacy Machine No.1 was awarded both the Public Prize (voted for by horology fans) and the Best Men’s Watch Prize (voted for by the professional jury). In 2010, MB&F won Best Concept and Design Watch for the HM4 Thunderbolt. In 2015 MB&F received a Red Dot: Best of the Best award – the top prize at the international Red Dot Awards – for the HM6 Space Pirate.

The World is Yours The New Orbis Mundi from BOVET 1822