Over the past 15 years, MB&F creations have transported their wearers to destinations that exist only on maps of the imagination: from star-cruisers to deep-sea jellyfish, Maximilian Büsser’s Machines are the mechanical cartographers of the multiverse.

But the greatest journey has yet to be undertaken, and true progress is marked by evolution. With Legacy Machine Perpetual EVO, you are the navigator; the map is your life. On this journey, you’ll never have to leave your watch behind. 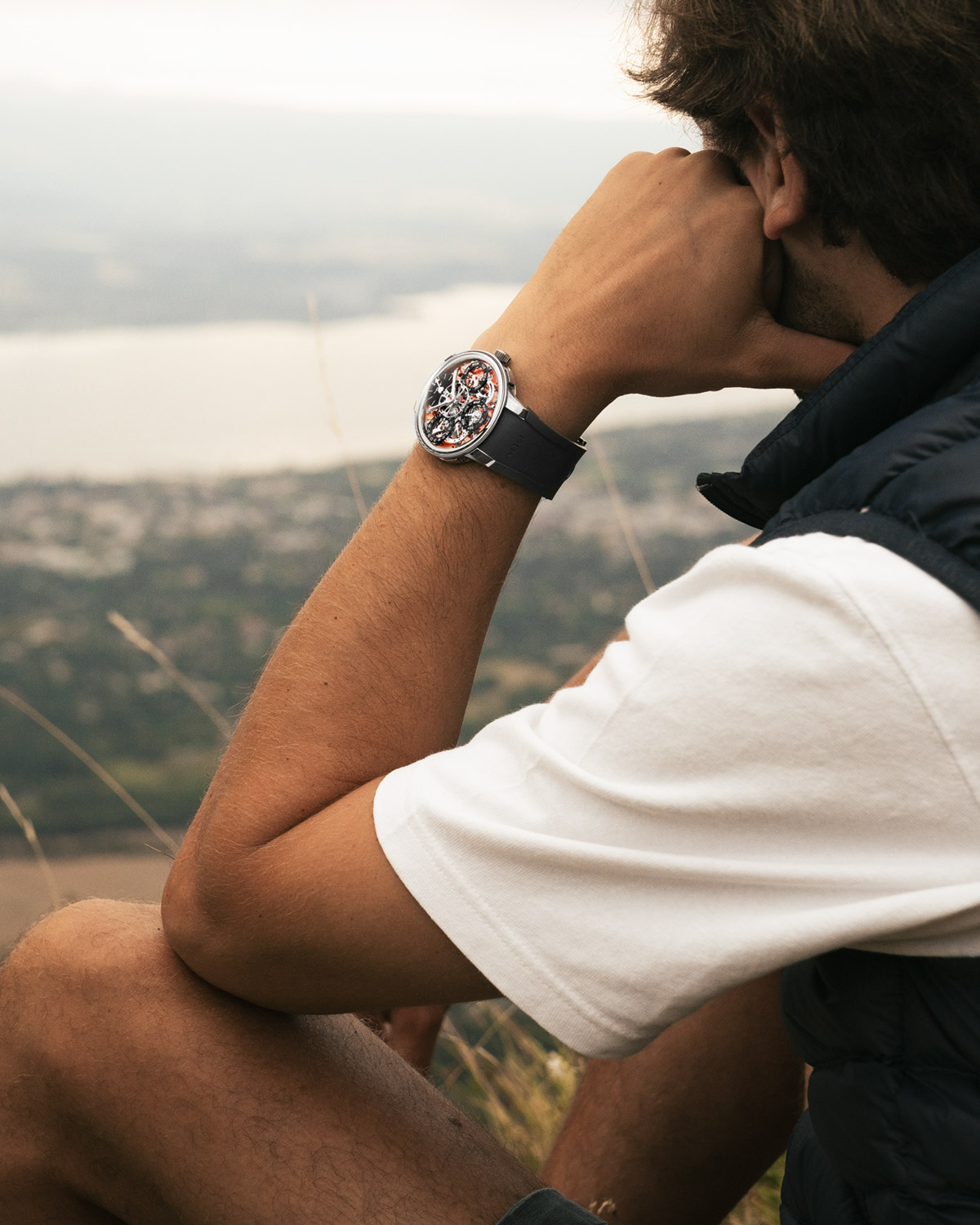 A 44mm case in zirconium or titanium, modern metals with material properties surpassing stainless steel. A new case profile that emphasises openness and extreme clarity. A specially developed monobloc shock-absorbing system – “FlexRing” – that makes for the most robust Machine ever to emerge from MB&F. The LM Perpetual Engine, designed by Stephen McDonnell, an award-winning perpetual calendar that replaces traditional constructions with an innovative mechanical processor.

The LM Perpetual EVO was first launched in zirconium with three options of PVD/CVD dial-plate colour, including — for the first time in a high-end piece of Swiss watchmaking — atomic orange. A grade 5 titanium edition follows in 2021, with a green CVD dial plate. All editions feature a closely-fitted, integrated rubber strap for the smoothest wearing experience of any MB&F Machine ever.

The MB&F collection has welcomed several complications and horologically prestigious mechanisms over the past 15 years, including the record-smashing TriAx that debuted in 2019’s Legacy Machine Thunderdome. In terms of combining prestige, tradition and innovation, however, Legacy Machine Perpetual has remained at the apex of MB&F watchmaking savoir-faire since it was introduced in 2015.

Although the 44mm diameter is unchanged from its 2015 iteration, the new EVO case design features a no-bezel construction, with the domed sapphire crystal fused directly to the case. The increased openness of this design highlights the equilibrium between the legibility of LM Perpetual EVO’s calendar indications and the cinematic play of the engine components — surmounted by the iconic MB&F hovering balance wheel. This expansive new presentation of the LM Perpetual Engine was no simple design reconfiguration. New geometries for the sapphire crystal had to be calculated, achieving the mechanically opposing aims of maintaining structural strength and decreasing its height-to-diameter ratio. Freeing LM Perpetual EVO from the bezel also necessitated the use of a sophisticated thermal bonding system between the sapphire crystal and the case. 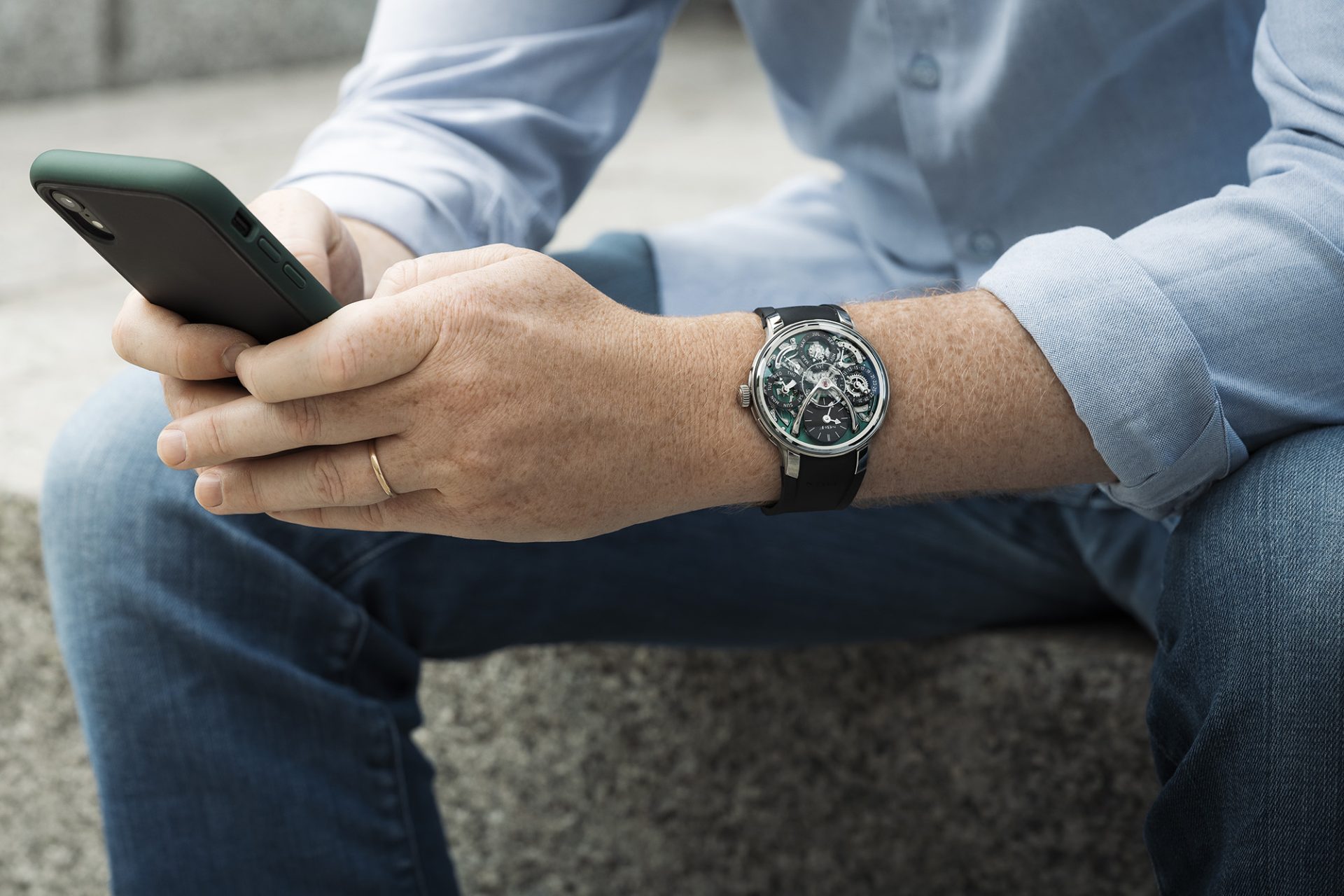 The previously circular pushers for adjusting the perpetual calendar have been enlarged into double-sprung oblong actuators, boosting the tactile comfort and ease of adjustment. For the first time in any MB&F creation, the LM Perpetual EVO is rated at 80m of water resistance, enabled by its screw-down crown. A small, but essential, detail of implementing a screw-down crown is the débrayage of the winding stem, disengaging the crown from the winding mechanism when it is pushed in and tightened, which eliminates the chance of manually over-winding the mainspring barrel.

An additional new element of the LM Perpetual EVO is the FlexRing: an annular dampener fitted between case and movement, providing shock protection along the vertical and lateral axes. Machined from a single block of stainless steel, the dampener imparts exceptional robustness to the perpetual calendar, a function that is associated with classicism and elegance, but is arguably the most pragmatic and utilitarian of all the high complications.

When Stephen McDonnell set out to redesign the perpetual calendar for MB&F, he proposed a system that rethought the entire mechanical basis of the complication. The LM Perpetual uses a “mechanical processor” consisting of a series of superimposed disks. This revolutionary processor takes the default number of days in the month at 28 — because, logically, all months have at least 28 days — and then adds the extra days as required by each individual month. This ensures that each month has exactly the right number of days, and removes the possibility of the date jumping incorrectly. An inbuilt safety feature disconnects the quickset pushers during the date changeover, so that even if the pushers are accidentally actuated whilst the date is changing, there is no risk of damage to the movement.

In design, in technique, in spirit, Legacy Machine Perpetual EVO is an evolution of your story with MB&F. 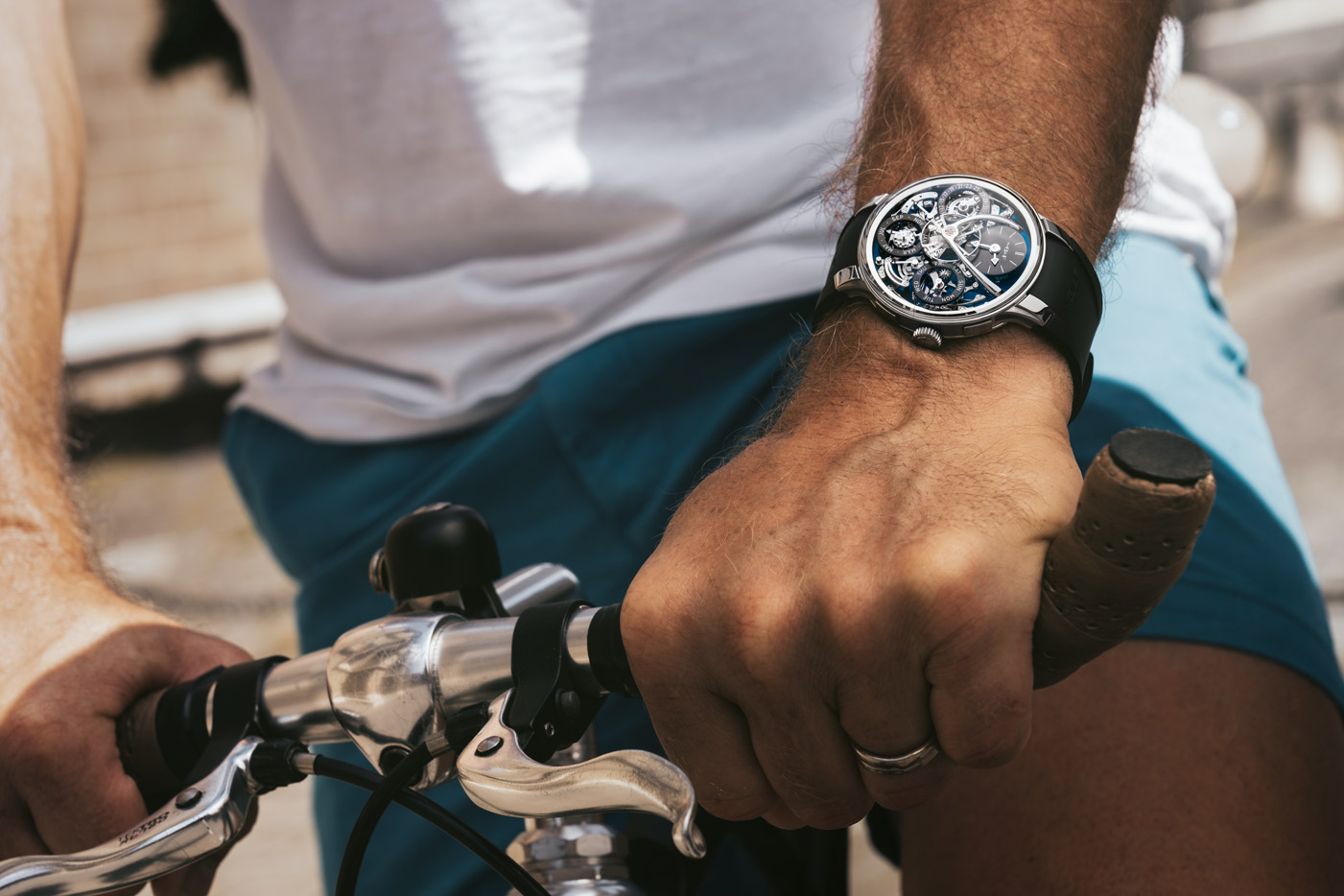 Conventional perpetual calendars are generally modules comprising the complication, which is fitted on top of an existing movement. The calendar indications are synchronised by a long lever running across the top of the complication and passing through the centre. As the date changes, this long lever transmits information to the appropriate components and mechanisms by moving backwards and forwards. This traditional system, while beautiful in its interplay of levers and components, is also extremely unwieldy, restricting movement construction in several key ways that would make something like Legacy Machine Perpetual a mechanical impossibility.

Created by Stephen McDonnell and premiered in 2015, the LM Perpetual Engine was — and still is — one of the most innovative perpetual calendar systems to exist in modern watchmaking.

In the traditional system, perpetual calendars assume that, by default, all months have 31 days. At the end of months with fewer than 31 days, the mechanism quickly skips through the superfluous dates before arriving at the 1st of the new month. Any manipulation or adjustment of the date during changeover can result in damage to the mechanism, requiring expensive repairs by the manufacturer. The dates can also jump or skip during changeover, negating the whole point of the perpetual calendar in the first place, which is not requiring adjustment for years. Or decades.

Legacy Machine Perpetual uses a “mechanical processor” consisting of a series of superimposed disks. This revolutionary processor takes the default number of days in the month at 28 – because, logically, all months have at least 28 days – and then adds the extra days as required by each individual month. This ensures that each month has exactly the right number of days. There is no “skipping over” redundant days, so there is no possibility of the date jumping incorrectly.

Using a planetary cam, the mechanical processor also enables quick-setting of the year so that it displays correctly in the four-year leap year cycle, whereas traditional perpetual calendar mechanisms require the user to scroll through up to 47 months to arrive at the right month and year.

The mechanical processor also enables an inbuilt safety feature that disconnects the quick-set pushers during the date changeover, eliminating any risk of damage while the date is changing.

In 2015, Legacy Machine Perpetual premiered the world’s longest balance wheel pinion, connecting the hovering balance to the escapement on the back of the engine. This technical feat has since been showcased elsewhere in the MB&F collection, namely the Legacy Machine Split Escapement. 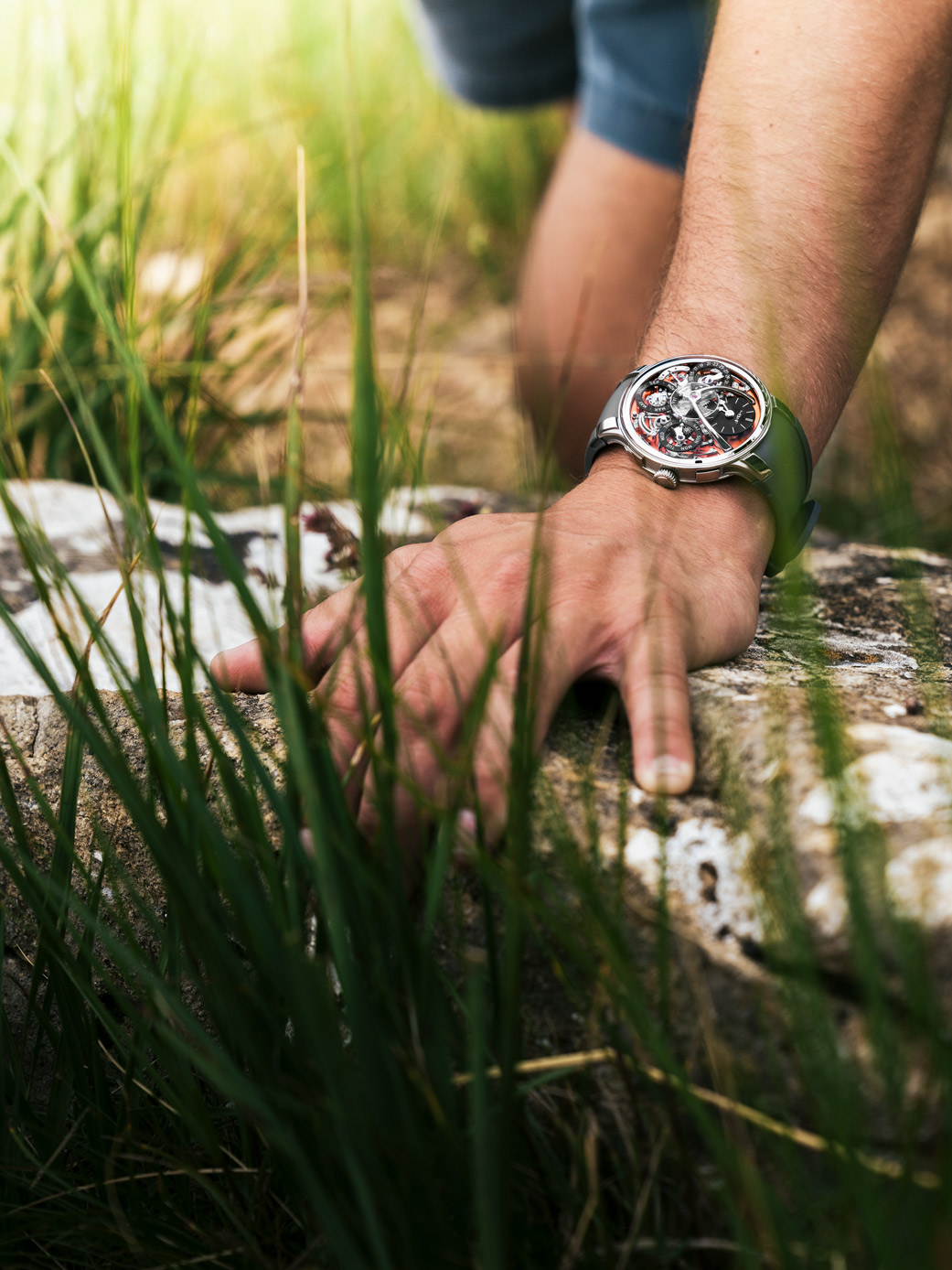 FlexRing: an annular dampener fitted between case and movement, providing shock protection along the vertical and lateral axes. 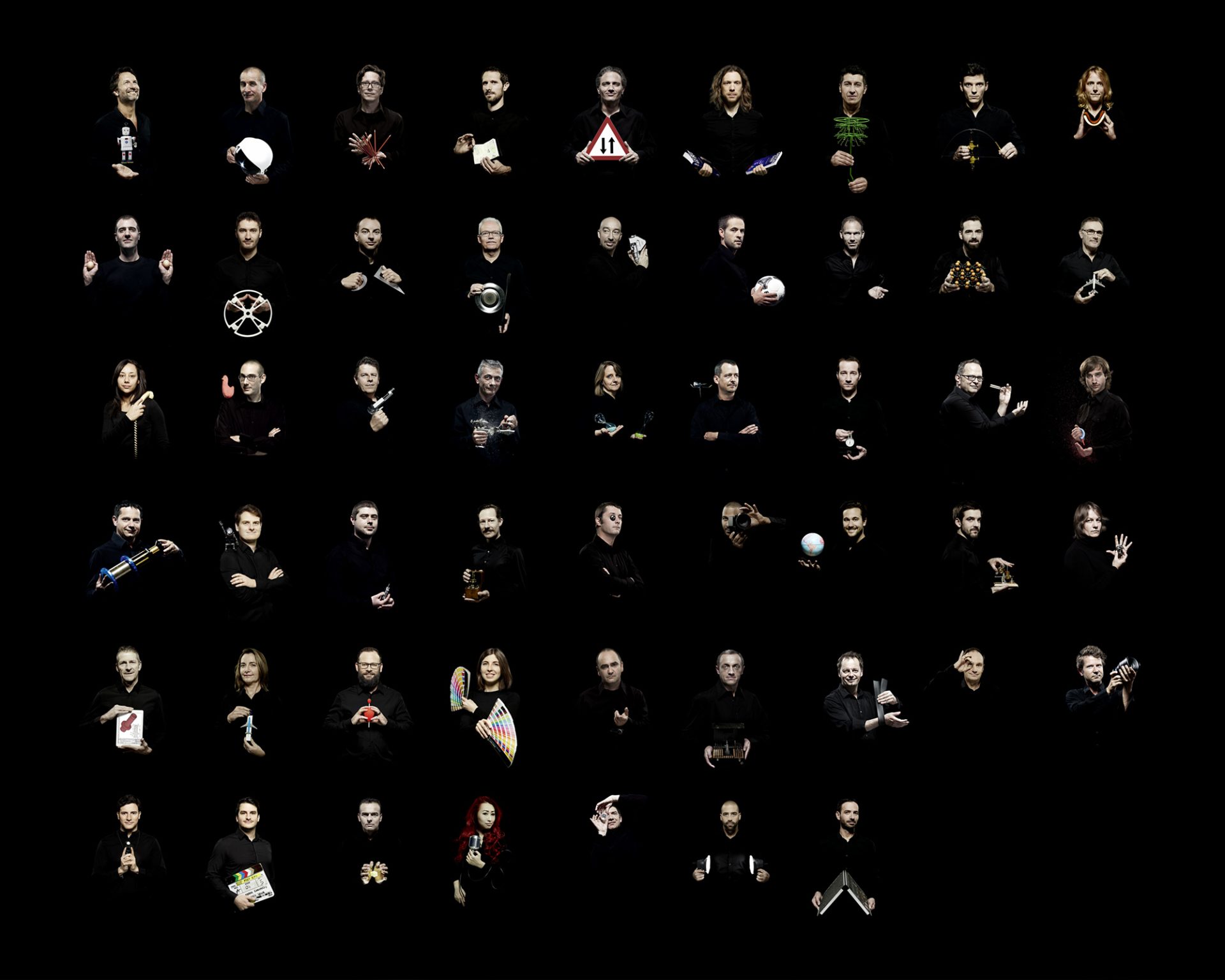 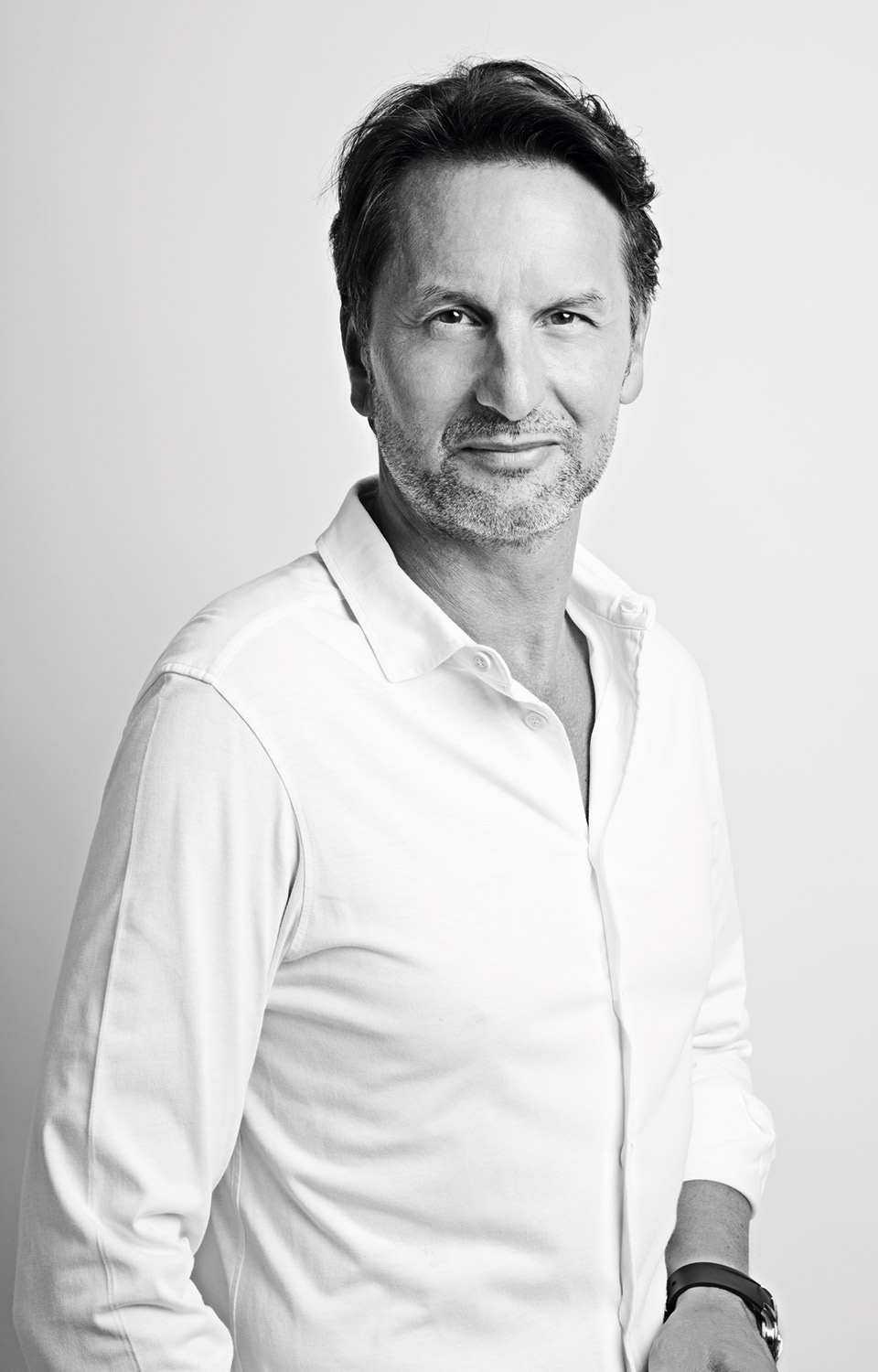 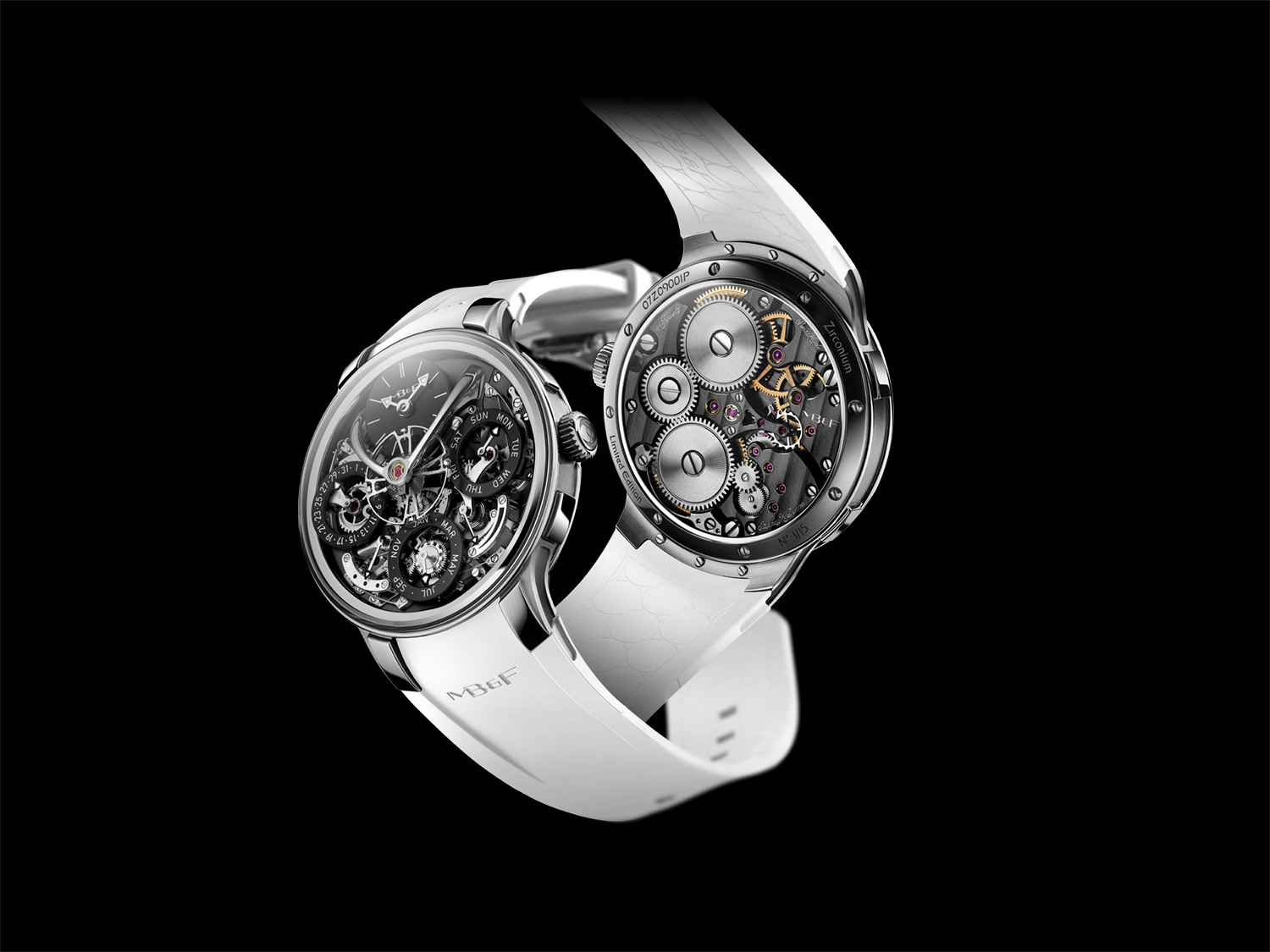 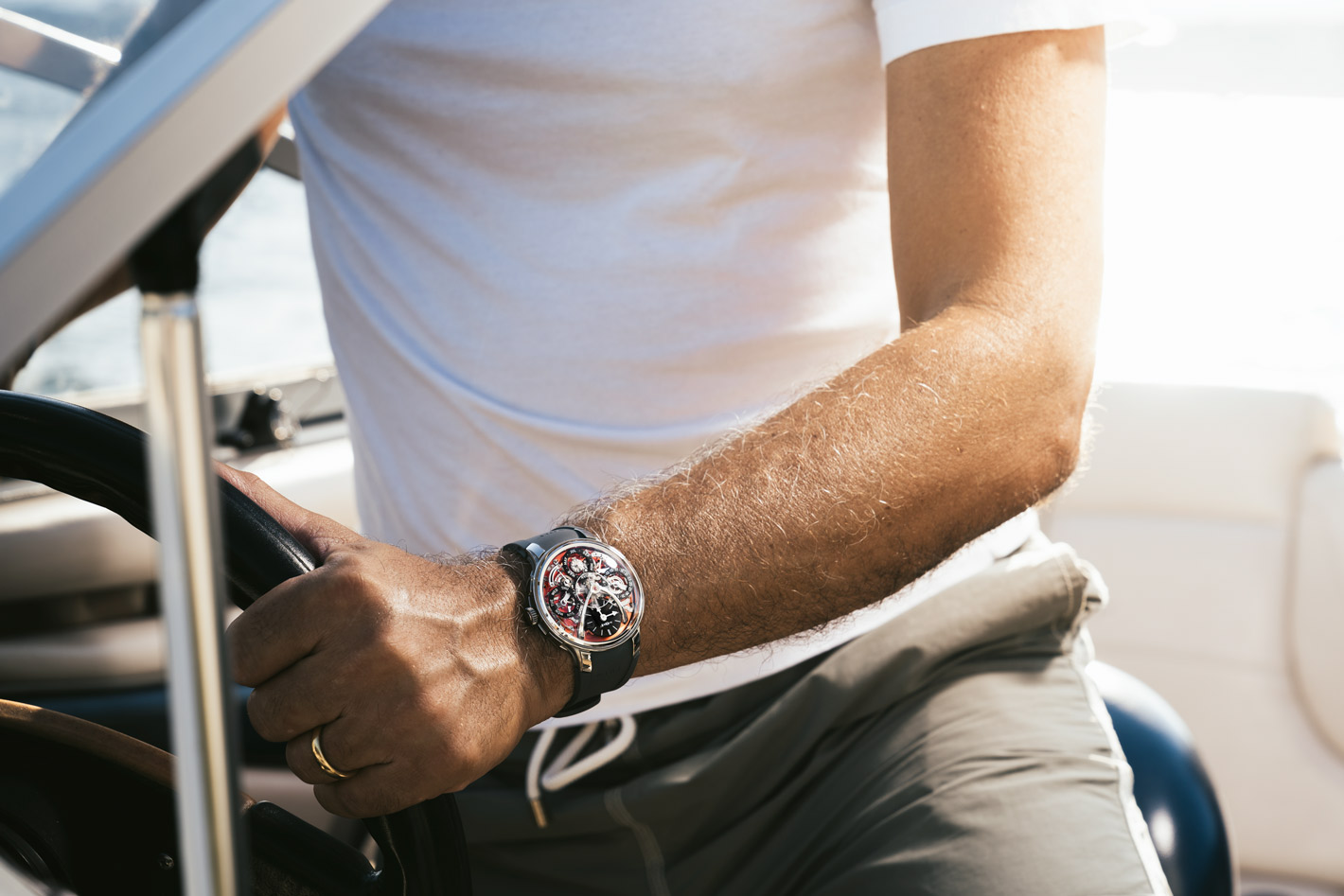 Ikepod: Design and the Art of Time