EMBARGO 7:00 CET / 24 November 2021, La Chaux-de-Fonds – Released in 1975, the GirardPerregaux Laureato has enjoyed huge commercialsuccess and is now widely considered an icon among watch aficionados. Now, the Manufacture is pleased to unveil the Laureato 42mm Eternity Edition, a model endowed with a sublime in-house grand feu enamel dial. The composition of this lustrous epidermis will never fade or lose its showroom-fresh appearance. Indeed, consistent with the Laureato ethos, this latest model is destined to deliver an eternal charm that will never diminish. 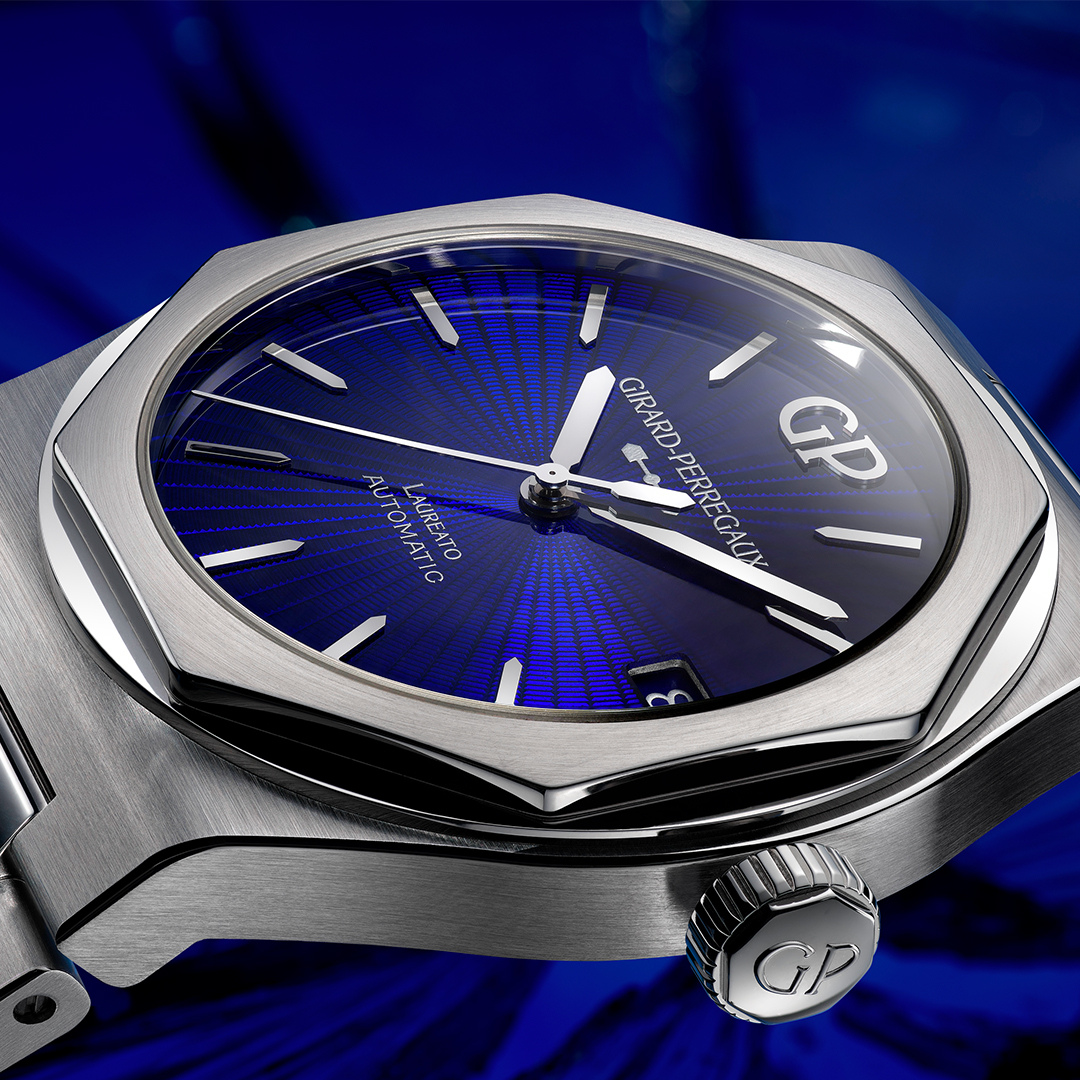 In 1969, Girard-Perregaux unveiled the Deep Diver, a watch intended for subaquatic use. Its cushion-shaped case was designed accordingly, but its curvaceous form also delivered a high quotient of eye-appeal. Most notable of all was the model’s unique bezel design. This design element transformed an essentially functional watch into an object of beauty. The bezel’s 14 facets played with light, twinkling like a brilliant cut diamond. While divers’ watches were often utilitarian objects, the Deep Diver also proved aesthetically pleasing to the eye.

Later in the mid-1970s, the steel sports watch was all the rage, including the Laureato, released in 1975. It featured a fully integrated bracelet and was initially supplied with a quartz movement, cutting edge know-how for the time. Interestingly, the design cleverly played with contrasting shapes. For example, a round dial was framed with an octagonal bezel which sat atop a circular plinth above a tonneau shaped case. This courageous play with shapes was vindicated by the wonderfully cohesive appearance of the model. The design team involved in conceiving the Laureato shrewdly chose to return to the bezel design of the Deep Diver, albeit on this occasion they endowed the bezel with eight facets rather than 14. However, the interplay with light proved equally impressive.

Over the years, the Laureato has evolved, embracing mechanical movements, different materials and a variety of complications. Indeed, while Girard-Perregaux has stayed true to the original design of 1975, it has never shied away from innovation. 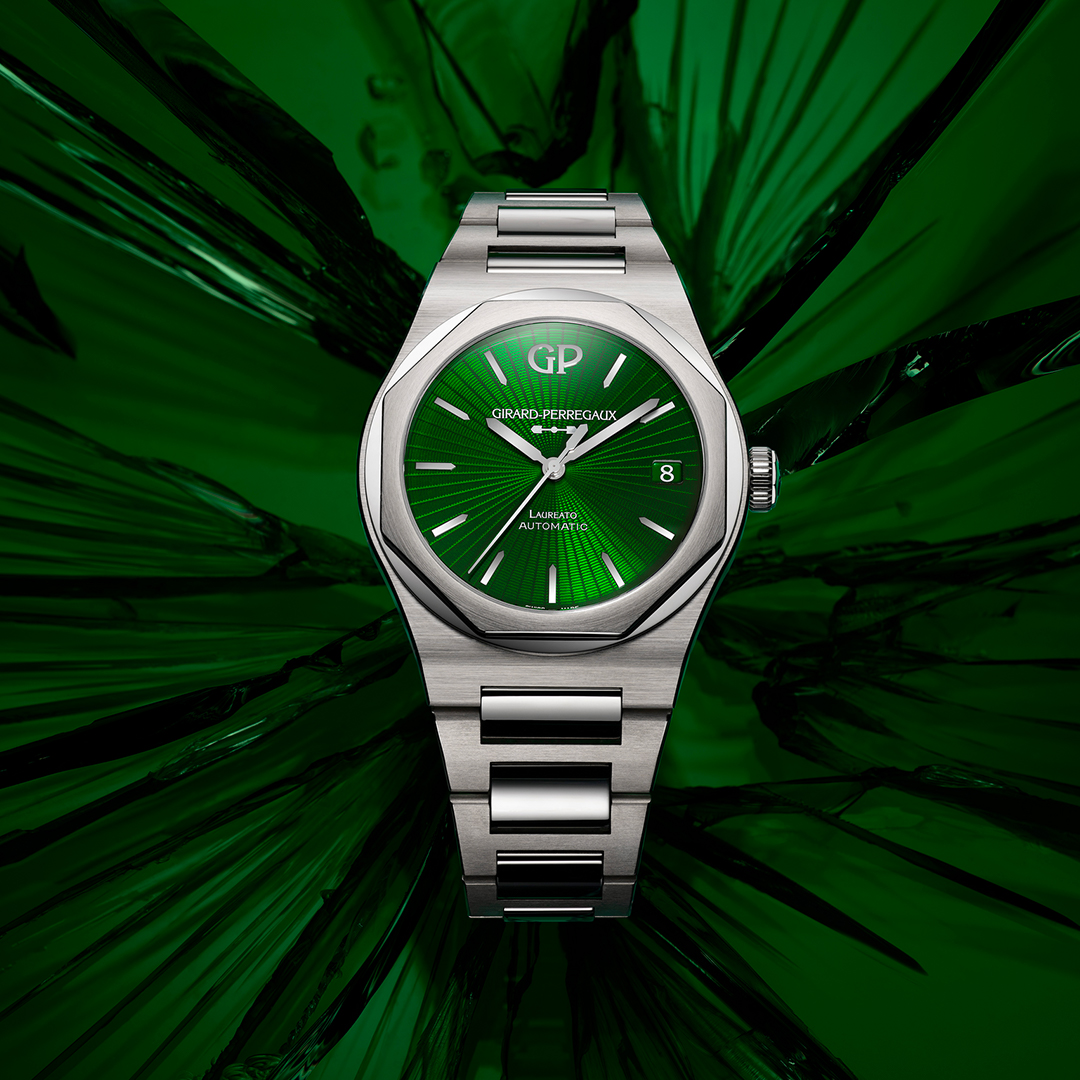 Now, the Manufacture is pleased to unveil a new version of the iconic watch, the Laureato 42mm Eternity Edition. The composition of this model respects the lasting appeal of the original Laureato design of 1975, but augments its enduring looks with a grand feu enamel dial. This glossy epidermis will never fade with the onset of years and will retain its showroom-fresh appearance indefinitely.

Patrick Pruniaux, CEO of , remarks, “This year, Girard-Perregaux is celebrating its 230th anniversary. Whenever we peruse our archives we are reminded that we have a responsibility to uphold the legacy of former watchmakers, craftspeople and artisans. The skills our company holds dear, should never be forgotten. With our Eternity Editions, much like the Infinity Editions that preceded them in 2020, we wanted to produce a limited number of watches that showcase our expertise for the enjoyment of generations to come. We wanted to produce watches that would still look incredible in the decades to come, hence we endowed these models with grand feu enamel dials, produced in our in-house facility. These dials won’t fade with the passage of time. Their beauty will remain eternal, destined to be enjoyed by those in the future.” 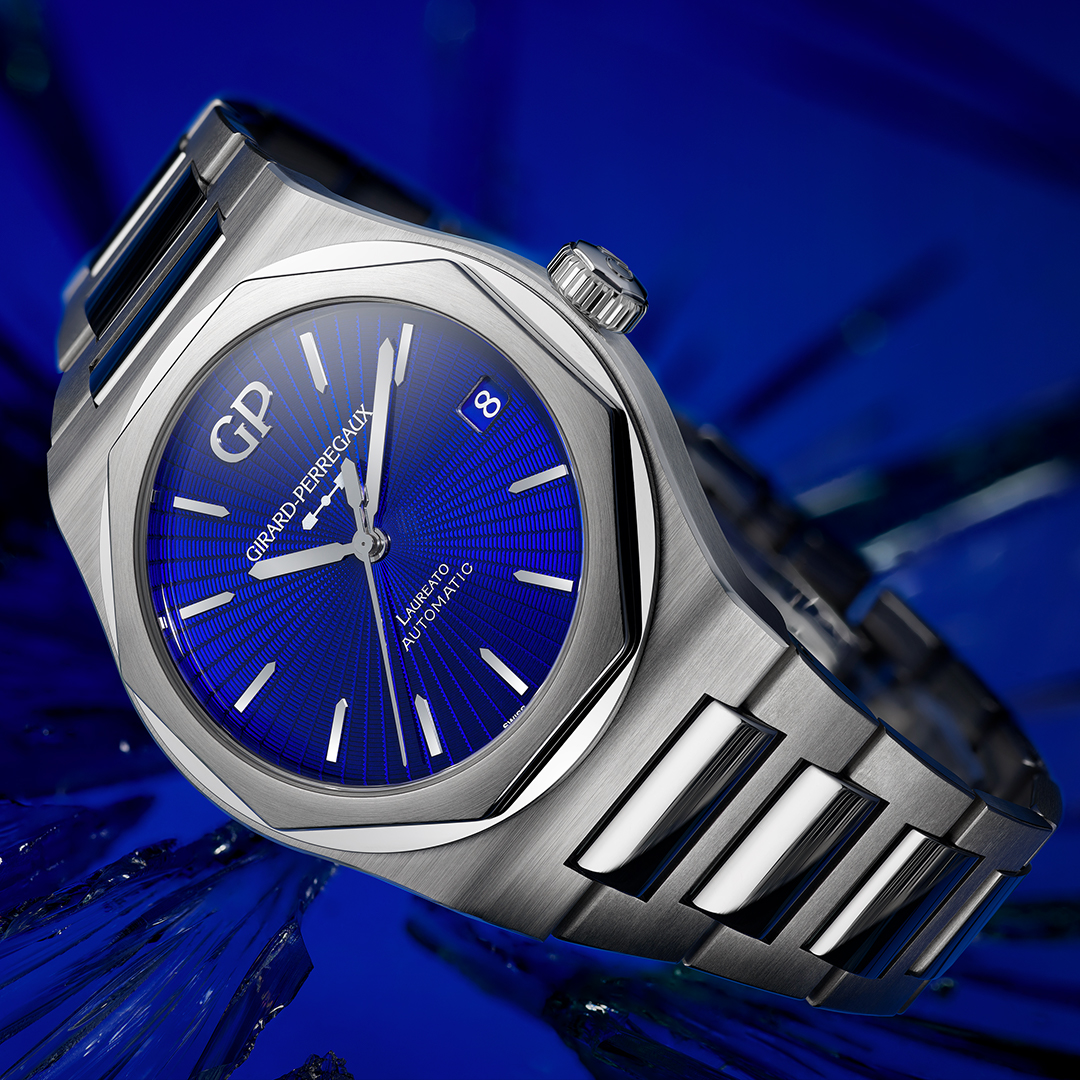 The grand feu enamel dials are made in the company’s in-house facility. The enamel comprises a mixture of silica, minium, potash and soda which are ground into a powder. Additional metal oxides are then added to create different coloured enamels. The powder is dusted onto the dial and then fired in an oven that typically operates at about 800°C. This process is repeated on 5-10 occasions to achieve the desired lustrous appearance grand feu enamelling takes much expertise to master, however, even with experience the repeated firings can still result in cracks appearing, air bubbles and colour imperfections. Inevitably, many dials fail to pass muster and are discarded. However, the main benefit of this protracted process is that flawless grand feu enamel dials retain their colour forever, promising an eternal joy.

Furthermore, Girard-Perregaux has enlivened the surface of the dial with a guilloché sunray motif. This pattern is visible through the translucent enamel surface, heightening the splendour of the dial’s surface. Prospective wearers are indulged with a choice of blue or green dial options.

While the dial epidermis may be very distinctive, other dial elements are reassuringly familiar. Rhodium-plated baton-type hands convey the hours and minutes. The brand’s initials are positioned at 12 o’clock and, along with the hour markers, are applied to the dial’s surface. The slender central sweep seconds hand features a counterweight emulating the profile of a Girard-Perregaux Gold Bridge. Purists will note the date display at 3 o’clock features white numerals positioned upon a coloured disc, matching the hue of the main dial as horological etiquette dictates. 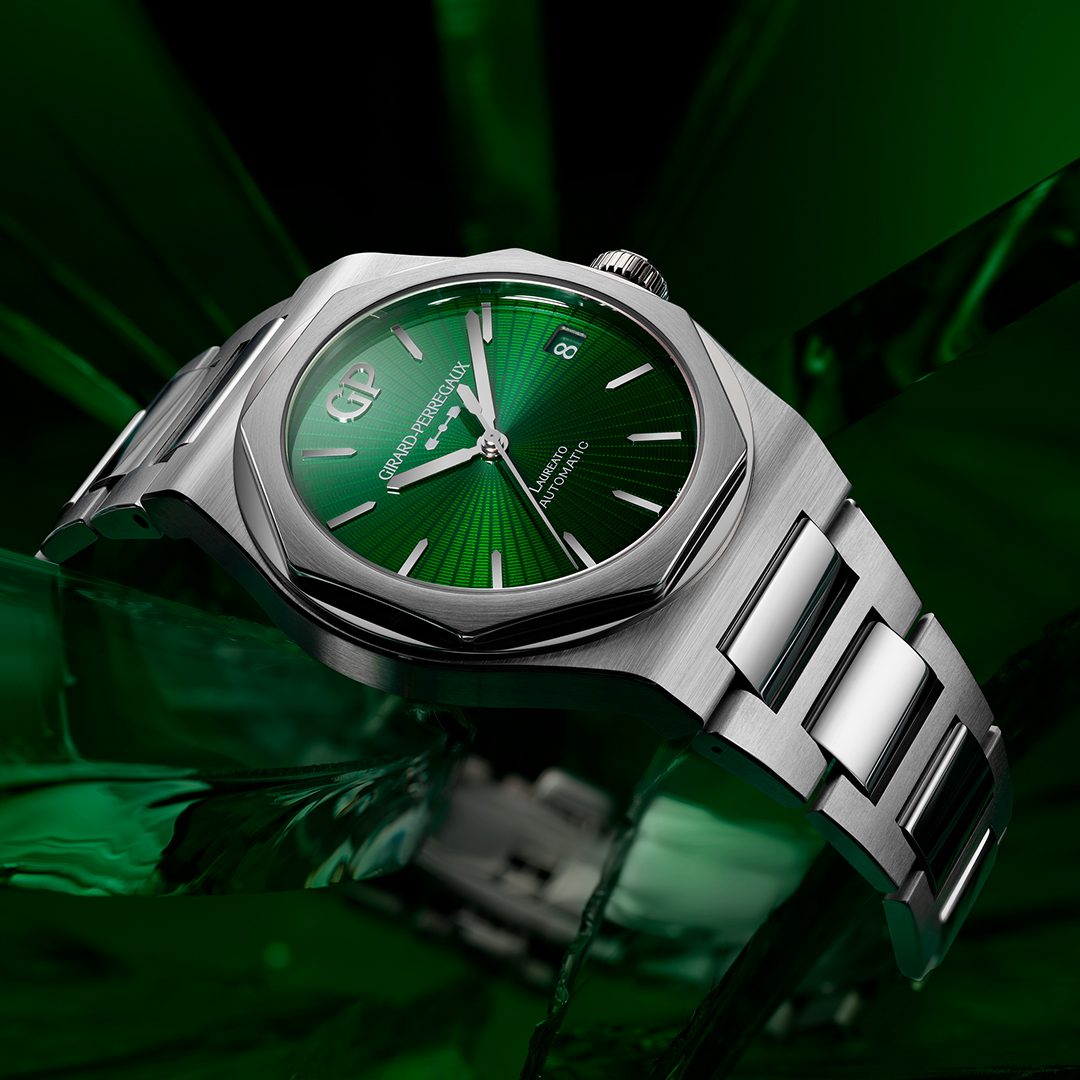 Upholding the DNA of the 1975 original, the Laureato 42mm Eternity Edition features an integrated bracelet. Each link is presented in polished or satin finished form, conferring a masterful interplay that has always been highly prized by watch aficionados. This marriage of contrasting finishes also extends to the case and bezel, bestowing a sumptuous feel to the composition.

Consistent with being a Manufacture, the GP01800 calibre is made at the company’s production facility in La Chaux-de-Fonds. The self-winding movement features a pink gold oscillating weight adorned with circular Côtes de Genève motif. Additional movement refinements include straight Côtes de Genève on the bridges, bevelling, mirror-polished screws, circular graining on the main plate and engraved gilded text, all executed to the company’s no-compromise standards.

The Laureato 42mm Eternity Edition, as previously stated, is offered in two variants, blue and green. Each option is limited to 188 pieces.

Following their unveiling during Dubai Watch Week, both versions of the Laureato 42mm Eternity Edition will be sold exclusively by Seddiqi during December 2021. Thereafter, the model will be available in all authorised Girard-Perregaux retailers and on the brand’s e-commerce site.

Founded in 1791, Girard-Perregaux is one of the oldest fine watchmaking manufactures still in operation and is appreciated by those in the know. This year the company celebrates its 230th anniversary, a fitting testament to the brand’s watchmaking expertise. Indeed, the firm’s history is dotted with exceptional creations that skilfully blend aesthetics and functionality. These models include the iconic Laureato, born in 1975, as well as the legendary ‘Tourbillon with Three Gold Bridges’, a watch that made the invisible visible, transforming bridges from just a technical element to an integral part of the timepiece – a first in watchmaking. Girard-Perregaux’s place at the vanguard of horological innovation is confirmed by over one hundred recorded patents together with numerous prizes and distinctions. It remains one of the few watchmakers to retain Manufacture status for over two centuries by mastering all the required horological skills in-house and making watches infused with a notable degree of authenticity. While Girard-Perregaux respects its heritage, it continues to look ahead, embracing
new technologies, state of the art materials, and fresh takes on iconic shapes. Girard-Perregaux is part of the Kering Group, a world leader in luxury apparel.