Newcastle, 3 rd May 2018 – For the second consecutive year, the Swiss luxury watchmaker Hublot, partnered with watch and jewelry retailers ROX to support the sixth annual charity gala of the Alan Shearer Foundation. Thanks to the dedicated fundraising, the Alan Shearer Foundation has raised an incredible £320’000 to fund the pioneering facilities for disabled people at its Centre in Newcastle. 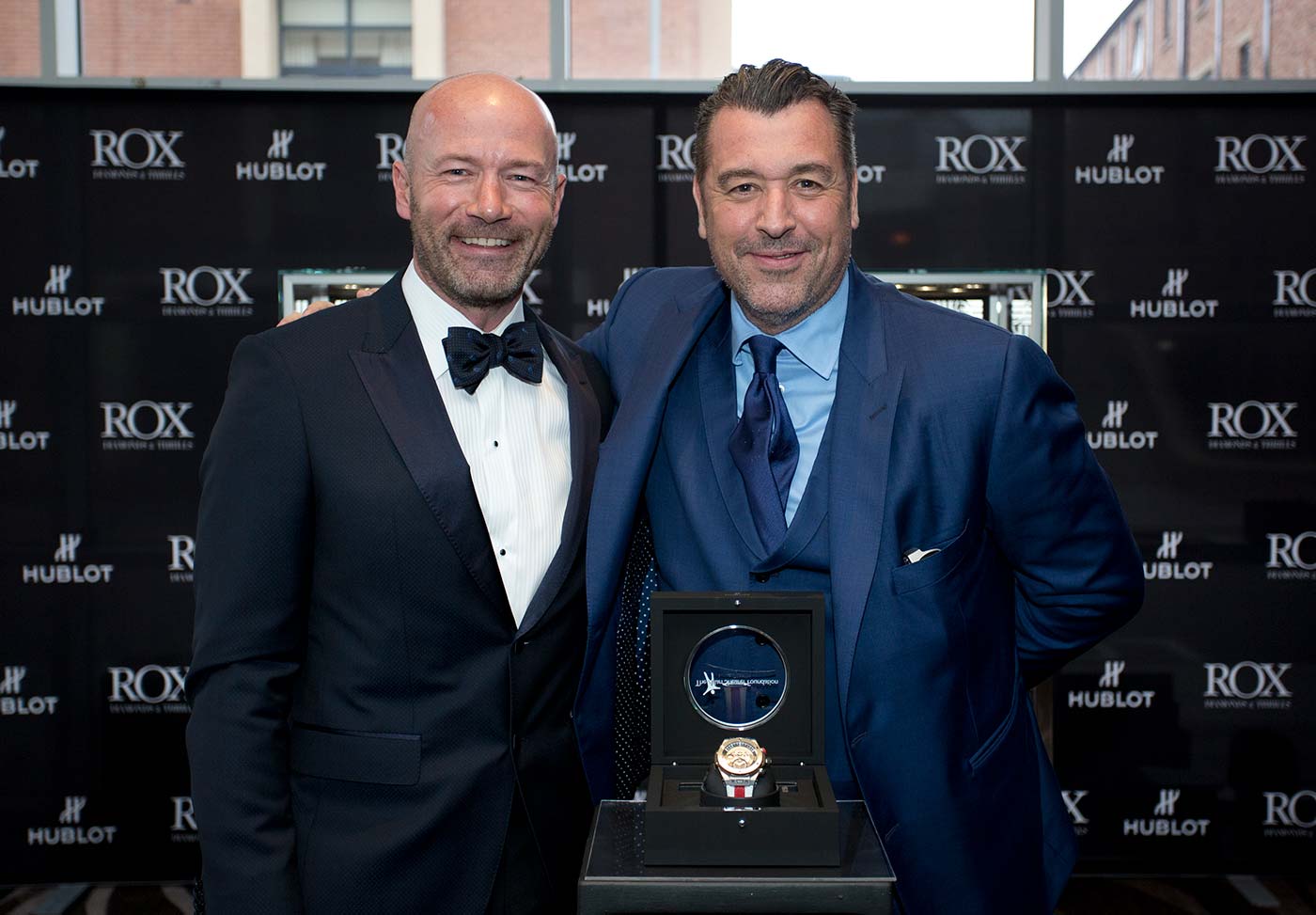 To support this occasion, Hublot donated a paired limited edition, produced exclusively in support of the charity cause, for the special auction. The two exclusive limited editions were presented on the evening in order to help increase the Foundation fundraising record, with the first auctioned to the highest bidder and the second awarded to the winner of the raffle. Hublot helped raising totally £75’000 for the Foundation.

The dedicated Big Bang Chronograph Retrograde Unico Special Edition Alan Shearer, draws inspiration from the illustrious career of the record holding Premiere League scorer. Drawing inspiration from Alan Shearer’s astounding history representing England, these limited editions feature accents of red and white throughout the dial with a proud England inspired strap crafted from schedoni leather. The caseback of each piece features the distinctive logo for the Alan Shearer Foundation and each marked with SPECIAL PIECE indicative of its exclusivity.

In order to celebrate this incredible fundraising there has been an exclusive performance given by the famous and inspired English comedian, Michael McIntyre, and the English recording artist, radio presenter and musical theatre actress, Beverley Knight. The Ball was hosted by the spectacular Bristish dancer and singer Anton Du Beke. 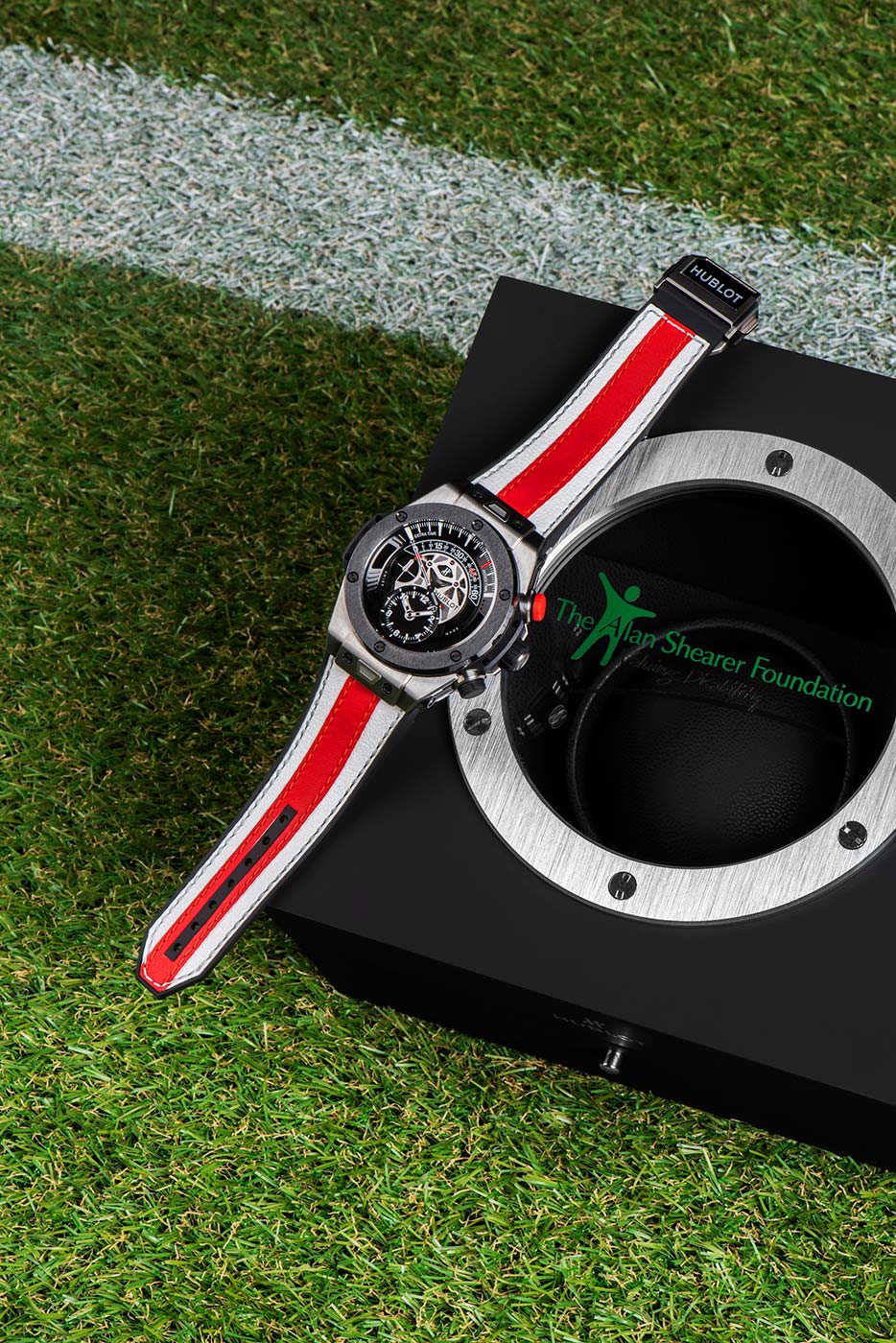 Alan Shearer said: “My relationship with Hublot has grown over the past 10 years and I am honored to have them alongside us this evening. This year in addition to the special piece to be auctioned with all proceeds going to the Alan Shearer Foundation they also offered a watch for the raffle. I am so thankful for everything they have done for my Foundation and look forward to working together again in the future.”

Benoit Lecigne, Brand Director for Hublot United Kingdom, France, Belux & Eastern Europe, added, “Once again we are proud to be alongside Alan Shearer and to have the opportunity to support his honorable charity work. We are delighted the Big Bang Chronograph Retrograde Unico Special Edition Alan Shearer watches has this year again raised an impressive figure in aid of this remarkable charitable cause.”

Hublot has had a long-standing partnership with Football dating back to 2006 when Hublot was the first luxury brand to enter this sport. In 2008 the Swiss luxury watchmaker started partnering with the UEFA. 10 years later, 2018 turns out to be another football year with the FIFA World Cup Russia™ just around the corner and the launch of the Big Bang Referee 2018 FIFA World CupTM: Hublot’s first smart-watch with integrated Goal Line technology, but also The FIFA Watch!

HUBLOT CELEBRATES ITS PARTNERSHIP WITH CHELSEA FC THROUGH THE “BLUE CARPET” GALA DINNER, THE « PLAYER OF THE YEAR AWARDS »