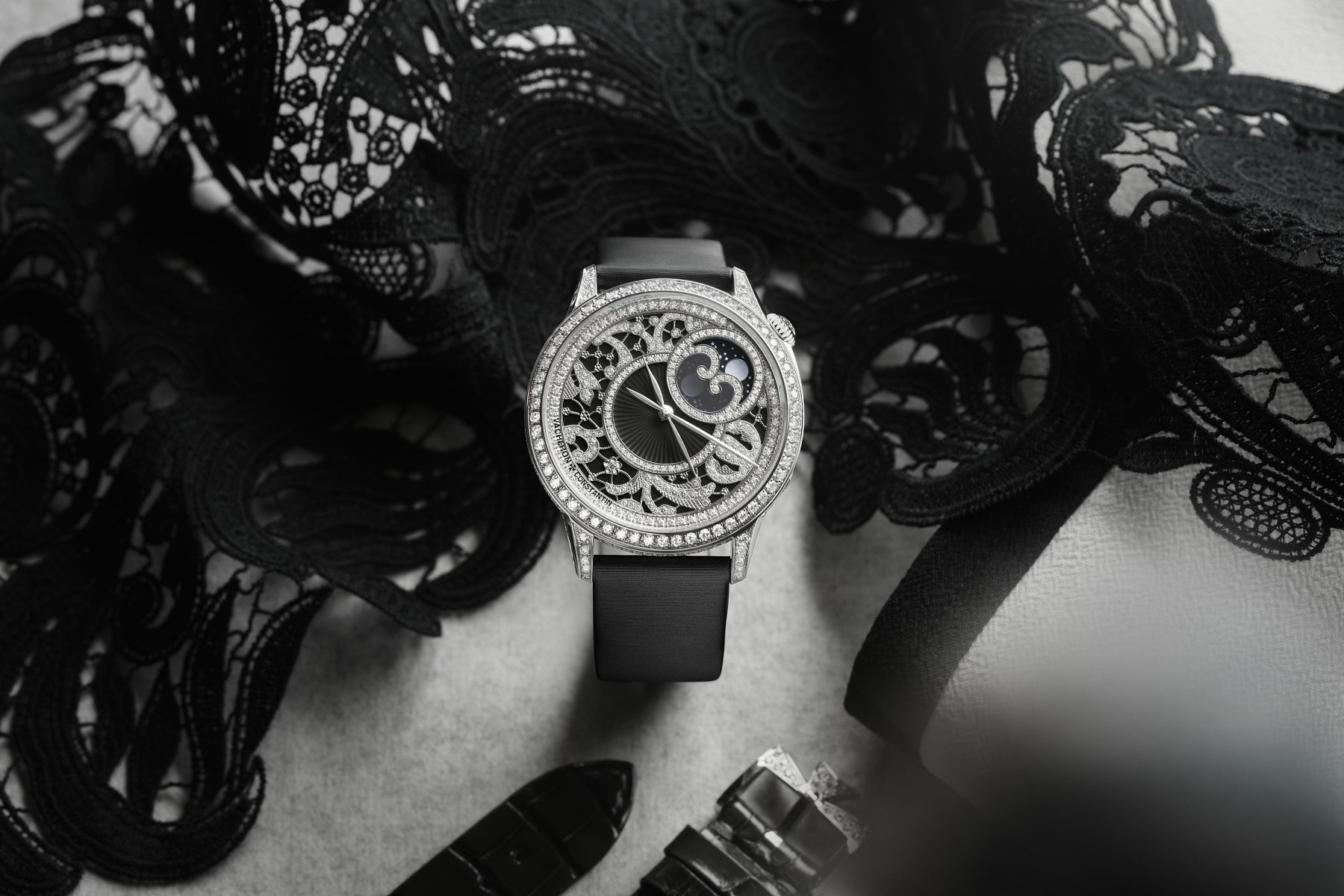 Unique in terms of seniority, since its activity has continued uninterrupted since its founding in 1755, Vacheron Constantin also stands out for its longstanding complicity with women. The new Égérie Creative Edition watch is now writing a new chapter in this relationship. Combining the finesse of Burano lace which inspired it with the watchmaking excellence cherished by the Maison, the new reference bears fresh testimony to the art of Belle Haute Horlogerie.

Unveiled in 2020, the Égérie collection is designed as an ode to femininity mingling Haute Couture and Haute Horlogerie. Its latest creation draws on the decorative craftsmanship that has been an integral part of the Manufacture since the early 19th century. Like the lace-makers of Burano crafting the most delicate creations with their needles, the Master Artisans have applied their art of engraving, enamelling, tapisserie and setting to the service of contemporary femininity.

Vacheron Constantin has always shown great sensitivity towards its feminine clientele. From the first pocket watches to the new Égérie Creative Edition watch, its creations are distinguished by the fact that they are designed specifically for women rather than being based on men’s models. The archives are full of watches ordered by women and often endowed with horological complications. Hunter-type cases and a variety of wristwatches thus illustrate the creativity of the Maison. The Art Nouveau and Art Deco periods gave rise to pieces as elaborate as lacework, cases adorned with applied floral motifs or cameos featuring mythological figures, along with skeleton watches. The Égérie Creative Edition timepiece echoes the silhouettes of the 21st century. Its asymmetrical features including the off-centre moon-phase display and the case’s integrated crown set with a rose-cut diamond between 1 and 2 o’clock accentuate the delicacy of the “embroidered” dial swept over by three graceful hands specially designed for the watch.

An encounter between artistic crafts : tapisserie, engraving, enamelling and gemsetting

Inherited from an ancient decorative technique and still executed by the master guillocheur on a machine dating from the early 20th century, the pleated tapisserie motif is produced on a silver base to further enhance the black enamel. The latter material – which is particularly complex to master in order to maintain the balance between transparency and colour – brings both contrast and volume. The art of the master enameller is also illustrated in the moon-phase window, with the mother-of-pearl night star appearing beneath a plique-à-jour enamel cloud, reduced to just 0.27 mm thick for the first time in the history of the Maison.

The extreme fineness of the white gold lace threads – comparable to that of an eyelash – is such that it is physically impossible to hold the applique between the fingers without bending it. The master engraver and then the master gemsetter therefore deployed the full measure of their expertise: one to create flowers and flat areas, as well as to express personal creativity on areas left free for personal choice; and the other to set the 250 brilliant-cut diamonds adorning the motif and the 292 others lighting up the case and the crown. The exceptional daintiness of the ensemble is complemented by the black satin-effect calfskin strap featuring a buckle set with 21 diamonds and which can be switched out at the touch of a button for an alternative second strap in black Missisippiensis alligator leather.

Is this the first time the Manufacture has been inspired by needlework?

The history of Vacheron Constantin is dotted with timepieces inspired by embroidery and lace motifs, particularly during the Art Nouveau and Art Deco periods. The early 20th century saw the appearance of highly decorated and precious models such as the pendant watches from 1908 and 1910 (Ref. Inv. 10982 and Ref. Inv. 10184) as well as a pocket watch from 1909 (Ref. Inv. 10466), which were often made of platinum – a supremely noble material – and featured floral motifs reminiscent of embroidery. The Art Deco period, which was notably characterised by extremely elaborate aesthetic and generous forms, also drew inspiration from the subtlety of lacework. This enabled the designers of the period to fully express their creativity through models featuring very original constructions, such as this 1918 brooch watch (Ref. Inv. 10668) in platinum of which the full-set bracelet picks up lace motifs.

What type of gemsetting is used on this watch and how long did it take?

The bead-setting technique was used on the Égérie Creative Edition watch, making it possible to achieve greater brilliance on such a meticulously crafted motif by reducing the gold on the diamonds. This technique required about six hours of work for the gemsetter who created the paving by inserting the gems into cavities carved into the metal base and then holding them in place with tiny metal beads.

Can one draw a parallel between the art of openworking and this gold lace set with diamonds?

There is clearly a parallel between diamond-set gold lace and openworking in the sense that removing the material is a real challenge requiring a lot of manual delicacy and finesse.

What were the main challenges involved in this timepiece?

Three major challenges stand out in the creation of this watch. The first concerns the use of black enamel, the trickiest colour to master in the sense that any rough surface, tiny, hole or micro-bubble will stand out in the light. The second challenge relates to the extremely delicate and thin applique (no thicker than an eyelash!) on which the lace pattern is engraved, as this component simply cannot be held between the fingers without bending it. The third challenge was to allow the engraver to express his creativity on the areas left free (except for solid blocks of colour and flowers), while respecting the consistent desire to preserve the artisanal and human aspect cherished by the Maison. The threads linking the motifs were thus engraved according to the engraver’s wishes, making each timepiece different.

The story of Vacheron Constantin’s relationship with women, which began at the turn of the 18th century, continues to unfold. Inspired by Burano lace, the latest model –Égérie Creative Edition – combines watchmaking expertise with the artistic crafts that Vacheron Constantin strives to perpetuate. Tapisserie, engraving, enamelling and gemsetting give rise to a precious timepiece sparkling with over 4 carats of diamonds.

Vacheron Constantin and Burano, a legacy of transmission

On 17 September 1755, when Jean-Marc Vacheron signed the first apprenticeship contract with a young watchmaker in Geneva – marking the birth of a Maison that was to make its mark on the history of watchmaking – the lacemakers of Burano Island had already been renowned for two centuries. The punto Burano officially appeared in the 18th century. Consisting in a very fine mesh with discreet floral motifs, this needlepoint stitch is carried out on a cloth-stuffed cylindrical cushion called a tombolo and is considered to be one of the most subtle in the world. Passed down from generation to generation, it is still practiced on the small island near Venice. The new Égérie Creative Edition watch pays homage to it by combining artistic crafts with watchmaking expertise, which are also embedded in the spirit of transmission driving the Maison.

“Like Vacheron Constantin, we have been perpetuating a unique savoir faire transmitted by generations of artisans. The nature of Burano needle lace lies in having been the forerunner and inspiration for this art that spread throughout Europe. In Burano, stitches were perfected, achieving a degree of artisanal virtuosity that led the island’s master lace-makers to travel and transmit their savoir-faire” explains the Burano Lace Museum.

Piece only available through the Vacheron Constantin Boutiques.