1966 East to West The concept of duality

La Chaux-de-Fonds, 18 December 2020 – Girard-Perregaux unveils the 1966 East to West, in celebration of the 160th anniversary of its trading relationship with Japan, together with Darren Romanelli, the celebrated streetwear designer. Darren Romanelli, also known as DRx, is recognised for his love of Japan and Japanese culture making him the ideal collaborator for this important model, launched on the cusp of another landmark, the 230th anniversary of the Manufacture, in 2021.

In 1860, François Perregaux, the brother-in-law of Constant Girard, one of Girard-Perregaux’s founders, arrived in Japan with the clear objective of selling Swiss timepieces. He established an office in Yokohama making him the first Swiss watch merchant to be based in the country. However, he knew he had a considerable obstacle to overcome: until then, the country did not use the same timekeeping system as Europe, and Swiss watches were initially viewed as curiosities. Nevertheless, he persisted and just four years after his arrival, a ‘Friendship and Trade Treaty’ was signed with Switzerland, paving the way for Swiss clocks and watches to be exported to the Asian nation.

The tables began to turn in 1873 as Japan commenced building a railway network and the nation adopted a Western time measurement system. This provided a great opportunity for François and led to a significant rise in Swiss watch exports. Over the years, François travelled extensively throughout Asia, however, we would always return to Japan, his adopted home. 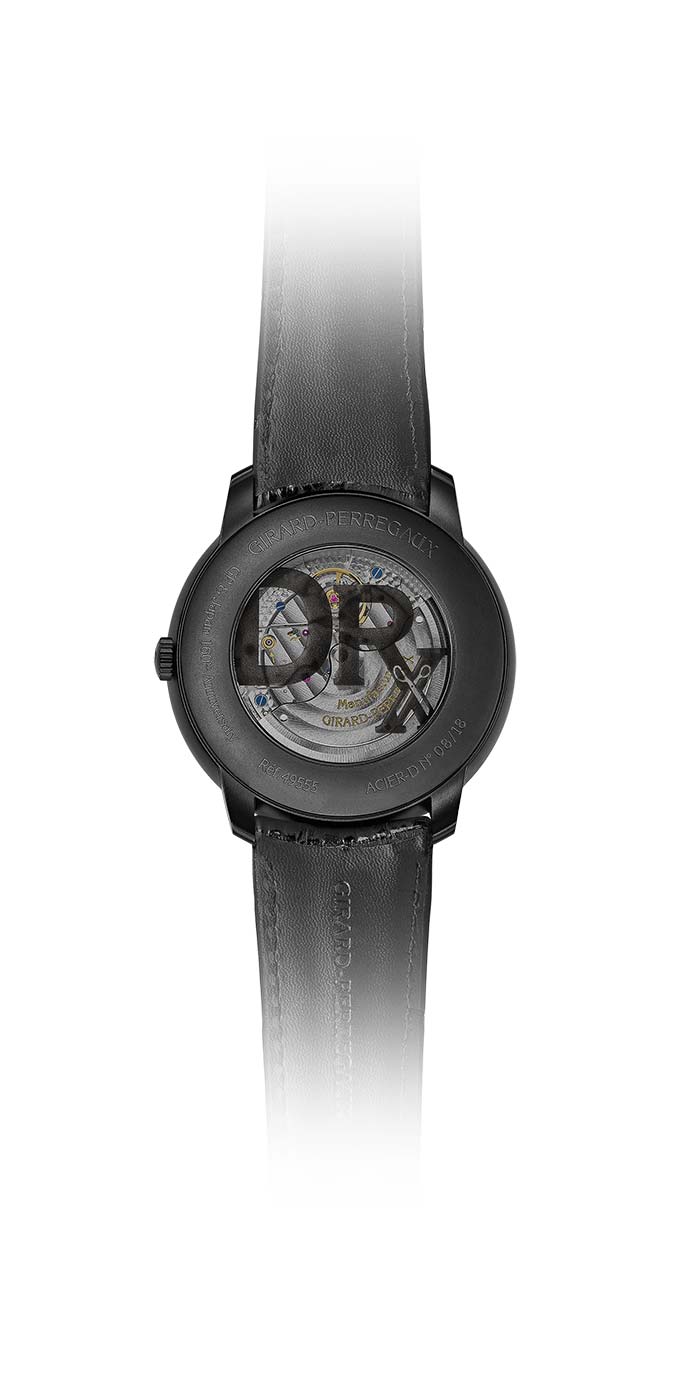 To this day, Girard-Perregaux continues to enjoy close ties with Japan. Indeed, this year the Manufacture is celebrating the 160th anniversary of its relationship with the country, releasing a new timepiece, the 1966 East to West. This watch is a collaboration between the long-established Maison and Dr Romanelli (DRx), a modern-day brand famed for its streetwear.

When François Perregaux established his business in Japan, his intention wasn’t merely to sell watches but also to market various objects including curios. François did not subscribe to convention; he was a maverick. As Darren Romanelli, also known as DRx, explained, “One of the reasons that I wanted to collaborate with Girard-Perregaux was
because of François Perregaux’s legacy. He was a nonconformist and a trendsetter. Likewise, I like to experiment with fashion and art as well as working with different collaborators. Also, I am known for my fondness for Japan and Japanese culture. I think if François were alive today, we would probably get along.”

Patrick Pruniaux, Girard-Perregaux’s Chief Executive Officer, remarked, “When François Perregaux travelled to Japan, some 160 years ago he set in place the foundations for what has since become a 160-year relationship. Because of our historical connection with Japan, we will always have an emotional bond with this nation. Today, on the eve of the 230th anniversary of the Manufacture, we celebrate this landmark.”

The 1966 East to West repeatedly plays with the idea of duality. For example, the dial is dressed in black onyx, bestowing a slightly restrained appearance, while the pink gold GP logo and the golden leaf-shaped hour and minute hands exhibit a degree of flamboyance. The onyx dial has been delicately shaped by hand to form a circular disc. The laborious creation of the onyx necessitates no fewer than 15 painstaking operations. Thereafter, the DRx logo is applied to the dial using a metallisation process imbuing the surface with a glossy black appearance. This logo is presented in black, slightly different in shade from the onyx, bestowing a clear and obvious distinction between the two hues. A pair of scissors, a trademark of DRx, also features on the dial. While the leaf-shaped hands are prominent, the central sweep seconds hand is executed in a stealthy shade of black, again reinforcing the duality of the composition.

At the heart of the 1966 East to West is the in-house Manufacture movement, the Calibre GP03300-1513. A smoked sapphire crystal, adorned with a DRx decal, affords views of the movement. While this latter detail is modern, the movement is endowed with traditional finishing such as circular-graining, bevelling, blued screws and ‘Côtes de Genève’.
Girard-Perregaux often creates limited editions of 8, 18, 88, 188 pieces, etc. as the number ‘8’ is synonymous with good fortune. On this occasion, the 1966 East to West is limited to just 18 pieces, delivering a notable degree of exclusivity. Part of the charm of the 1966 East to West is the repeated juxtaposition of dissimilar entities. The 1966 is a classical timepiece, however, this DRx version, with its black DLC sandblasted case, onyx dial and DRx branding looks incredibly contemporary. Sometimes in life we observe differences that collectively deliver something incredible, something we term the ‘the concept of duality.’ Traditional and modern. Simplicity and sophistication. And, most pertinently, East meets West.

The 1966 East to West, limited and numbered 18 pieces, is available in Girard-Perregaux official retailers across Japan from mid-December 2020.

Founded in 1791, Girard-Perregaux is one of the oldest fine watchmaking manufactures still in operation in Switzerland today. Our history is dotted with exceptional creations that bridge aesthetics and functionality to reveal the value of time. These include the iconic Laureato, born in 1975, as well as our Tourbillon ‘With Three Gold Bridges’ which made the invisible visible, transforming bridges from just a technical element to an integral part of the timepiece – a first in watchmaking. Girard-Perregaux’s place at the vanguard of horological innovation is confirmed by over one hundred recorded patents, and the innumerable prizes and distinctions we have received. We remain one of the rare watchmakers to retain Manufacture status for over two centuries by mastering all the required horological skills in-house. Our timepieces today push the boundaries of watchmaking for modern living.

Darren Romanelli (DRx, Dr. Romanelli) is a Los Angeles-based designer, creative director and curator. He is most notable for creating series of customised, limited edition clothing, furniture, and collectibles and adds his signature DRx touch to all levels of a project’s development, from inception to display to promotion. He has had collaborations with Coca-Cola, Levi’s, Adidas, and Disney, among others.
@drxromanelli
https://drromanelli.com/ 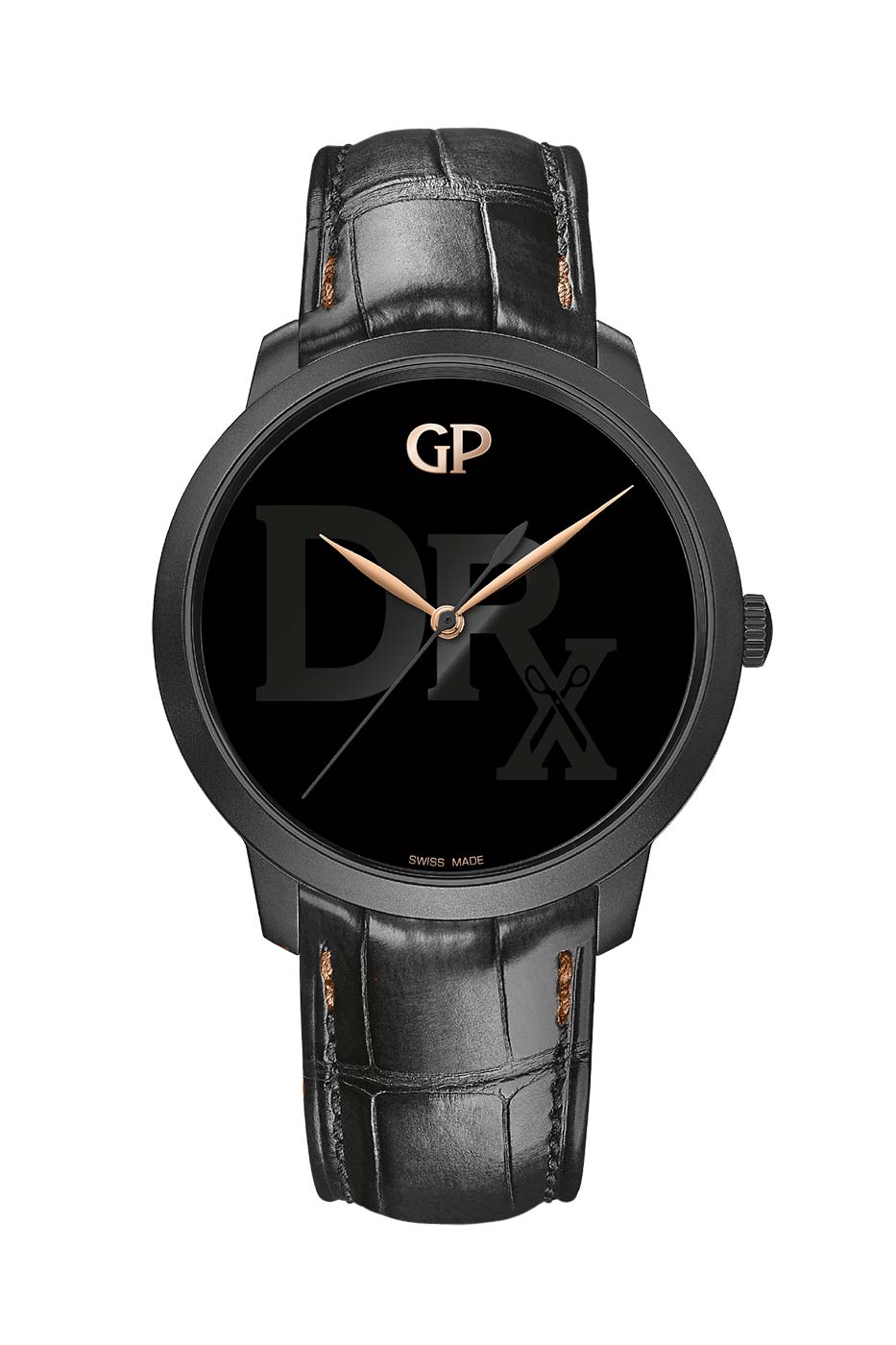