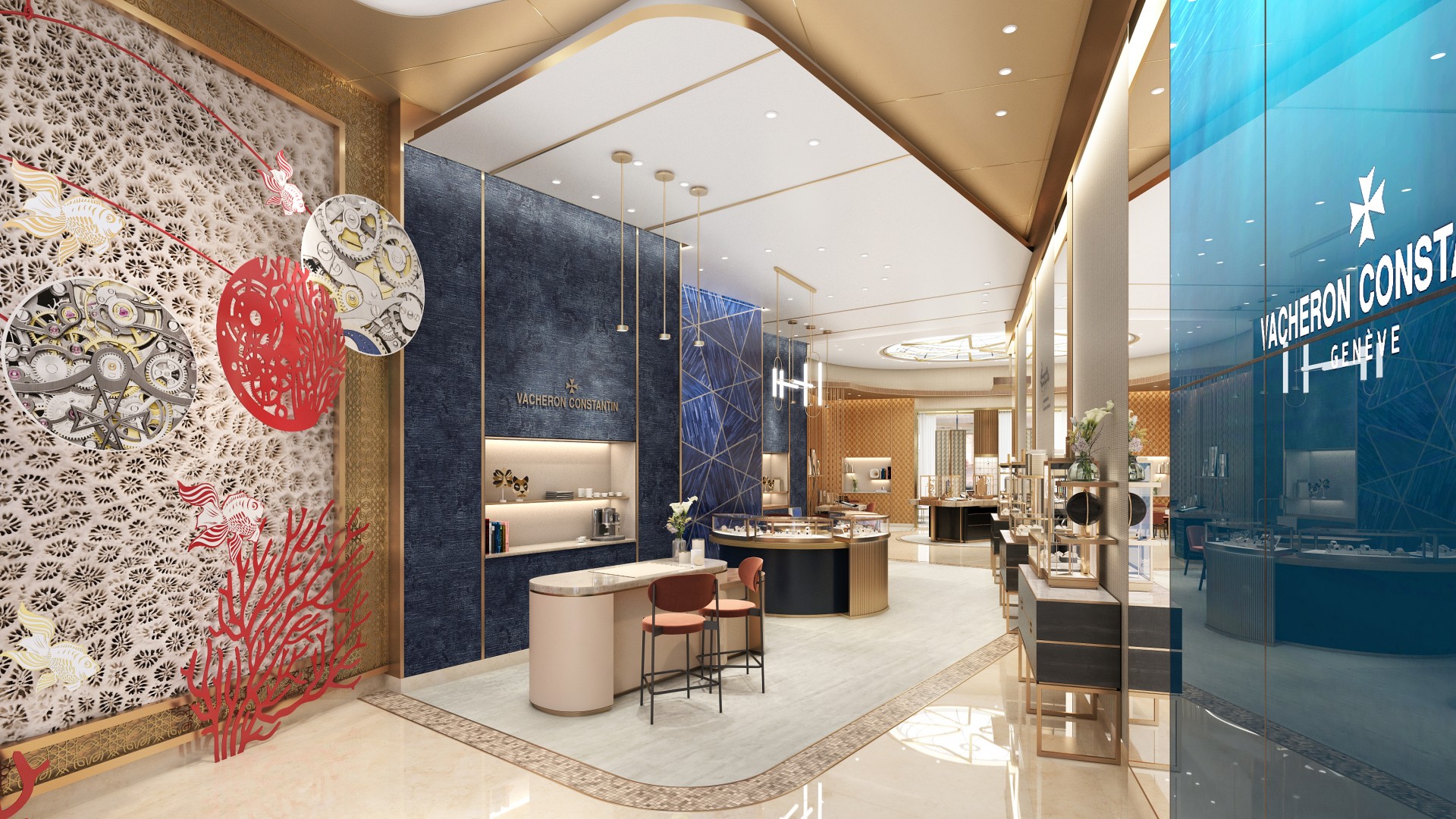 Dubai U.A.E., July 30th 2022 – Vacheron Constantin, the luxury Swiss watchmaking Maison with 267 years of expertise, is delighted to announce the re-opening of its flagship boutique in The Dubai Mall. The boutique pays tribute to the Maison’s deep roots in the Middle East and commitment to outstanding client service.

“Vacheron Constantin and the Middle East have shared a love of fine watchmaking for over 200 years a joint passion notably expressed in the 20th century through two exceptional watches gifted to Their Majesties Fouad I and Farouk of Egypt in 1929 and 1946 respectively. These were the most complicated watches of their age. Prince Farouk, who nurtured a passion for watch mechanisms that he enjoyed taking apart, visited our workshops in 1937 in the company of the Commercial Director at the time, Léon Constantin.
Today, with the reopening of our Flagship in The Dubai Mall, our Maison is pursuing its age-old relationship with the Middle East region and its many devotees of Belle Haute Horlogerie.”
– Louis Ferla , Chief Executive Officer, Vacheron Constantin

Immersive Experience
Located on the Ground Floor of The Dubai Mall, the boutique entrance is adorned with the Mashrabiya pattern, traditional to local architecture, references to which continue inside the space offering a metaphorical and physical journey. As a demonstration of the Maison’s commitment to client-centered services, the heart of the experiential boutique opens to the watchmaking bench, intended to encourage interaction with an in-house master watchmaker, as well as a custom strap station presenting both engraving and embossing bespoke options along with a Métiers d’Art collection discovery table placed below an iconic dome. A striking blue straw marquetery wall with Maltese cross motif creates a focal point that conveys Vacheron Constantin’s dedication to high watchmaking artistry. Two private salons encourage the meeting of minds, that truly embody Vacheron Constantin’s dedication to building an immersive brand experience for their clients.
The Dubai Mall Flagship also offers an interactive tour through the history of the Maison via its digital archives: the “Chronogram”. A large eye-catching screen developed in partnership with the Swiss Federal Institute of Technology in Lausanne (EPFL), the Chronogram is an innovative tool that uses emerging technologies to digitalize Vacheron Constantin’s exceptional body of archives accumulated since 1755, shared with the public for live exploration of the Maison’s heritage. This will serve as an invitation to enter the heart of a galaxy of thousands of documents and dematerialized visuals and learn the insider secrets of manufacturing.
” We are delighted to welcome enthusiasts and connoisseurs to Vacheron Constantin’s world
of Haute Horlogerie and tradition back to The Dubai Mall, after the run of our highly successful
Suite 1755. This newly renovated flagship gives us a wonderful opportunity to further develop
our enduring relationship with the Middle East clientele and allow them to discover the extent
of our Manufacture’s archive and abilities. We hope that its prominent location and outstanding
façade inspired by local elements, exemplifies the Maison’s dedication to the spirit of the
region.” – Christophe Ramel, Vacheron Constantin Regional Brand Director.

Introducing the Vacheron Constantin collections
The new Flagship houses the complete Vacheron Constantin timepiece collections from simple to high complications such as the Traditionnelle perpetual calendar ultra-thin, a recently launched watch which meets women’s desire for mechanical complication timepieces, boutique exclusive models, the first permanent Les Collectionneurs vintage watch offering in the Middle East, along with the first permanent Heritage exhibition and the periodic showcase of an exclusive Les Cabinotiers assortment will be also showcased within this new Flagship.
Les Collectionneurs
The Dubai Flagship will be one of the very few boutiques in the world to permanently showcase a selection of Les Collectionneurs vintage timepieces, chosen with patience and talent by the Maison’s heritage specialists. This curated collection of vintage Vacheron Constantin watches from the 20th century have been restored and are offered with the same warranty given to contemporary collections.
Les Cabinotiers
Les Cabinotiers, Vacheron Constantin’s approach to single-piece editions, showcases the Maison’s amazing wealth of creative and technical talent. Les Cabinotiers department combines excellence and dedication, with a group of master watchmaking professionals who use their wide-ranging scientific knowledge in the latest technical breakthroughs and 18th-century watchmaking crafts to perpetuate Vacheron Constantin’s tradition of innovation. Creating both bespoke timepieces in response to customers’ requests as well as timepieces conceived by Vacheron Constantin master-watchmakers, Les Cabinotiers is about translating dreams into reality in mechanical and artistic terms and consistently pushing the boundaries of what is possible in watchmaking today.

Vacheron Constantin and The Middle East: a long-lasting relationship

What is the Maison’s relationship with the Middle East’s Royal Families?
The archives attest to the fact that the royal family of Egypt has been a regular customer of the Maison since 1910. A good example of this special relationship is the story of King Fouad first’s watch. In 1927, Francis Peter, President of the Mixed Tribunal of Cairo and a Swiss citizen, acquired, in the name of the Swiss community in Egypt, what was the most complicated watch ever created by the Maison till then. A highly complicated timepiece gifted to King Fouad in November 1929 in a sandalwood box decorated with the royal crown and the king’s insignia in Arabic.
From the 1950s onwards, it was the Saudi royal family and its close entourage that became loyal customers of the Maison. In the 1980s, watches from the Kalla collection were indeed successful with the Royal family of Saudi Arabia.

How has the Middle East inspired the Maison over the years?
The Middle East culture and ornamental arts, especially its manuscripts, often illustrated with golden and colorful paintings provides an inexhaustible source of inspiration for the Vacheron Constantin craftsmen.
The breathtaking oriental architecture, made of domes, volutes, columns, minarets, arches and balconies, also inspires the craftsmen who work on the decoration of the skeleton movements for example, are real gems of complexity.

Is the new boutique showcasing any of the heritage timepieces?
For the first time in the Middle East, the new Flagship exhibits a permanent selection of heritage timepieces among which a yellow gold pocket watch from 1834 (Ref. Inv. 10678), featuring an enamelled champlevé case and intaglio engraving and a skeleton Men’s square watch from 1989 (Ref. Inv. 10339), in yellow gold, featuring arabesque decoration on gold case circle from the Vacheron Constantin Private Collection that are inspired by the Arab world.

Sum-up
Vacheron Constantin re-opens its newly renovated Flagship in The Dubai Mall. Following the success of Suite 1755 in Dubai, the boutique pays tribute to the Maison’s deep-rooted relationship with the Middle East and commitment to outstanding client service.
The boutique features a new design inspired by traditional local architecture that conveys Vacheron Constantin’s dedication to high watchmaking artistry. The Flagship houses for the first time in the Middle East, a permanent Les Collectionneurs vintage watch offering, along with a permanent Heritage exhibition, highlighting some incredible timepieces originally by the region and its culture.
The Middle East clientele will get to experience a sensorial journey, immersive, client-first services that include in-house watchmaker, strap customization, interactive digital archives, exhibition space and have access to the complete Vacheron Constantin timepiece collections from simple to high complications, boutique exclusive models and more.