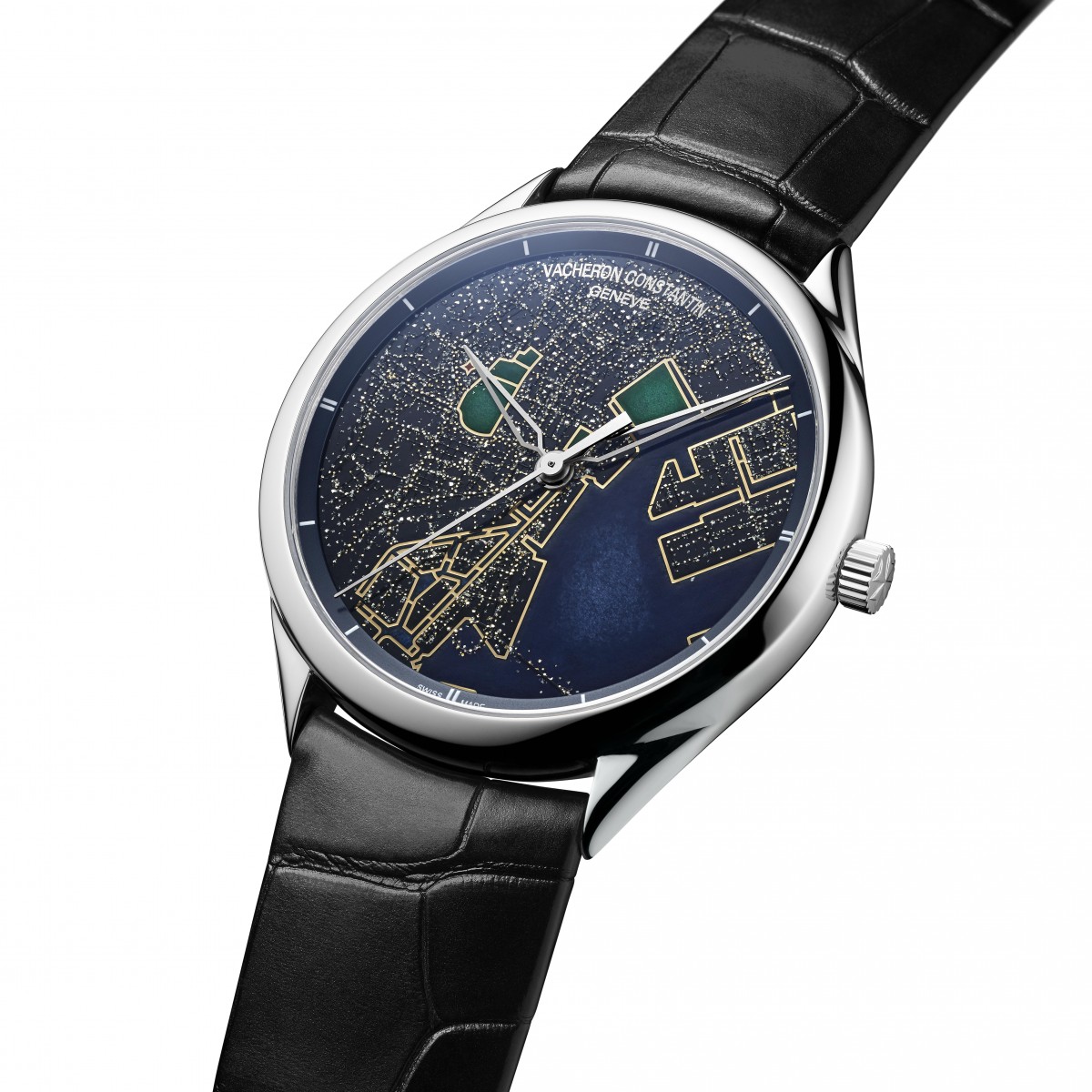 The Métiers d’Art Villes Lumières collection is an invitation to embark upon a nocturnal journey above cities bubbling with creativity. On dials draped with an enamelled base in deep shades, a wide variety of powders creates a bird’s-eye view miniature tableau of these sprawling urban expanses. Traditional Grand Feu champlevé enamelling mingles with hand-applied precious powder, an art never yet used in Haute Horlogerie. The striking and realistic beauty of these timepieces opens up whole new artistic and creative horizons, where traditional skills are constantly nurtured by fresh influences.

The Maison has dreamed up a sparkling encounter between two exceptional arts: Grand Feu champlevé enamelling, a skill passed on for almost three centuries by the Vacheron Constantin artisans; and hand-applied precious powder, a technique mastered by Japanese guest artist Yoko Imai. This unique technique has been used on a watch dial to which particles of gold, pearl, platinum and diamond powder are meticulously distilled one by one, endowing the enamel with exceptional radiance. The bright dots of light, placed with the greatest precision, compose a portrait of these broad and majestic urban landscapes. The light effects play across these strikingly realistic roads, rivers and famous landmarks. The Métiers d’Art Villes Lumières watches beat to the rhythm of a mechanical Manufacture movement graced with refined finishing, in accordance with traditional Haute Horlogerie techniques. After the first models dedicated to the nocturnal magic of Geneva, Paris, New York, Beijing, this night-flight across time continues over another metropolis: Tokyo.

An enduring vocation for artistic crafts

The Métiers d’Art Villes Lumières collection perpetuates the age-old Vacheron Constantin tradition of artistic crafts. In 1755, the very first known watch by the founder of the Maison, Jean-Marc Vacheron, already featured delicate engraved arabesque motifs. Ever since, for almost three centuries, gemsetters, enamellers, guillocheurs and engravers have been cultivating and passing on these forms of expertise that have become extremely rare. Today as yesterday, over the years and in step with successive creations, their dexterity has given life to masterpieces of the watchmaking art. These decorative skills have acquired the habit of echoing each other, combining their techniques with art and creativity on watch dials, and often adopting the spirit of lesser known and surprising arts such as illumination, Japanese lacquer, glyptics or gemstone cloisonné effects. In keeping with this tradition, the Métiers d’Art Villes Lumières collection enables Vacheron Constantin to explore new, contemporary and innovative expressive territory for artistic crafts.

Vacheron Constantin has depicted major cities – notably renowned for their artistic influence – through their nocturnal panorama. Individually applying precious powder particles naturally implies extreme dexterity, and doing so on the surface of a watch involves the additional constraint of defining an ideal altitude for each city so as to convey realistically the emotional impact of its urban outlines. The miniature tableaus that Yoko Imai has composed faithfully reproduce the real ‘light cartography’ of the cities, with their various sorts of light, such as variously animated districts and even traffic density! This incredibly meticulous work on the map of each city called for several weeks of research and trials on various base materials.

For each of the dials, the Vacheron Constantin Master enameller first examined the possibilities afforded by champlevé in order to highlight the shapes of the streets, gardens and stretches of water. After hollowing out the gold dial by hand according to the chosen outlines, he then applied successive layers of translucent coloured enamels. Between each coating, the dial is fired at the extremely high temperature of 850°C. These crucial and delicate stages, masterfully guided by intuition and governed by stringent discipline acquired over time, enable the powdered glass mixed with colouring oxides to be melted, transformed and then vitrified by cooling – with the inevitable risk that the dial may crack or flaws may form. In the Métiers d’Art Villes Lumières collection, the master enameller has taken up the additional challenge of composing subtly translucent and dark shades in order to reproduce the singular night-time atmosphere.

Vacheron Constantin invited the Japanese artist Yoko Imai to associate her art with that of the enamelling artisan. Trained by the great Japanese masters, she has developed her own artistic technique: calligraphy-inspired painting on canvas, inspired by precious powder. For Vacheron Constantin, she has adapted this process to the enamel of a watch dial, while creating a fascinating chiaroscuro effect. To ensure a faithful transcription of the city lights, her deft hands are guided by absolute mastery, unwavering concentration and a special sensitivity requiring a particular form of concentration and sensitivity.

The technique of applying precious powders borrows a fundamental principle from the art of calligraphy: the quest for balance and purity. Using a thin stylus, the powder particles are individually affixed using a technique that remains a jealously guarded secret. The luminous magic of the completed tableau depends on this extremely rigorous approach: each fragment is perfectly positionned in its rightful place and there is no room for anything random or superfluous.

Each of the powder specks is thus chosen according to its size and its shimmer, then worked on from several angles and with various types of light, so as to ensure enhanced radiance and realism. First of all, tiny gold grains form the luminous backdrop. Then diamond and platinum powder are successively applied to create shiny and dark effects, punctuated by pearl spangles. Their varying brightness makes it possible adjust the direction and size of the luminescent areas, in order to infuse the dial with life and warmth. On the enamel base, between the raised gold ridges, tens of thousands of spangles shine in the light. The particles of precious powder, all of varying shades and degree of luminosity, interact both amongst themselves and with the dark shades of the Grand Feu enamelled background. The radiance of the composition is more intense in the dial centre and gradually softens towards the outer edges of the dial.Hand-crafted during more than three months and born from a mingling of artistic crafts, each dial is truly unique.

The lights of Geneva, Paris, New York, Beijing and Tokyo

The flyover begins with Geneva, the cradle of technical and precious watchmaking, renowned for having nurtured the art of miniature painting on enamel. Vacheron Constantin was born in the heart of the town, in the St-Gervais district, where the cabinotiers had their workshops.

Then comes Paris, the “City of Light” par excellence, a favourite among artists, philosophers and writers, known the world over for the inimitable elegance of its style. The aerial view of the capital retraces the life of iconic landmarks such as the Place de l’Étoile and the Champs-Elysées, the Seine, as well as the Eiffel Tower famed for its light effects, viewed from above and engraved in gold.

The journey continues with New York, the city that never sleeps, a symbol of dreams and effervescence, where everything is possible. Reproducing it stretches the technique of applying precious powders to its absolute limits, with the highest vantage point that could possibly be depicted. Sprinkled across the Grand Feu enamel, tens of thousands of precious dots animate the luminous outlines of Manhattan Island with Central Park, the Hudson River and Brooklyn.

Then the twinkling magic of Beijing appears on the horizon. The shimmering glow of the Imperial City viewed from above carries a hint of its manifold splendours testifying to a proud history. The more intense halos of certain monuments, landmarks and particularly animated streets surround the vast Forbidden City, which remains less brightly lit and more mysterious. The Meridian Gate, the Gate of Heavenly Peace and Tian’anmen Square can be distinguished on this meticulous cartography composed of enamel and precious powders.

Finally, the lights of Tokyo make their stage entrance, lending precious sparkling accents to the translucent Grand Feu enamel dial base, featuring a darker shade for the city and a bluish hue for Tokyo Bay. Specks of gold highlight symbolic locations: the Ginza luxury shopping district, the iconic Tokyo Tower, the Kasumiga-seki and Nagatcho political centre, the Rainbow Bridge, as well as the super-trendy Roppongi hotspot. This vibrant nocturnal cartography expresses the harmonious energy characterising the capital of Japan. Water and earth, technology and history: striking contrasts rub shoulders and mingle to create a perfectly balanced alchemist’s blend.

The timepieces of the Métiers d’Art Villes Lumières collection are certified by the Hallmark of Geneva, a sure token of precision and reliability issued by an entirely neutral and independent body. Manufacture Vacheron Constantin mechanical self-winding Caliber 2460 SC drives a display of the hours, minutes and seconds. Visible through the transparent case-back, the 22 carats gold oscillating weight features a finely executed decoration inspired by the Maltese cross, the Vacheron Constantin signature emblem. Each of the components, whether visible or hidden, is adorned with finishes crafted in accordance with the finest watchmaking skills exemplified by bevelling, circular-graining and polishing. The movement is protected by a precious white gold case.The Métiers d’Art Villes Lumières collection is a horological and artistic creation in keeping with the purest Vacheron Constantin traditions. Its striking dials, like authentic miniature tableaus, offer an original view of fascinating cities and of the watchmaking art itself, perpetually inspired and constantly reinvented.

The name of the city is engraved on the back of the timepiece.
Only available in Vacheron Constantin Boutiques.